Generation and maintenance of NPCs

NPCs were generated as previously described [10] with modifications. In detail, 80.000 iPSCs per well were plated on day − 2 on a 12-well plate, coated with Vitronectin (StemMACS iPS-Brew XF (Miltenyi), supplemented with 2uM Thiazovivin) and incubated overnight.

On day − 1, cells were washed once in PBS and the medium was changed to fresh StemMACS iPS-Brew XF.

NSMM medium was changed every day and cells were split when reaching 80–100% confluency. For the first 6 passages 2 µM Thiazovivin was added after splitting. From passage 2 on NSMM medium was supplemented with 5 ng/ml FGF2. See further details for media and cell culture materials in Additional file 8: Table S1.

NPCs were seeded 200′000 cells/ml in NSMM + 5 ng/ml FGF2 on 24-well plates. Differentiation was induced by withdrawal of small molecules CHIR99021, SB431542, hLIF and FGF2. Cells were cultured for 21 days in NSMM without small molecules, hLIF and FGF2 with daily media changes during the first week and media changes every other day or biweekly in the second or third week, respectively.

NPC transduction for in vivo tracking

For in vivo cell tracking, dual-reporter lentiviral plasmids pLL410_EF1a-rFLuc-T2A-GFP-mPGK-Puro (LL410PA-1) and pLL-CMV-rFLuc-T2A-GFP-mPGK-Puro (LL310PA-1) were obtained from System Bioscience. Lentiviral generation was carried out as previously described [11]. For NPC transduction, 650′000 cells/well were seeded in NSMM + 5 ng/ml FGF2. After 24 h, 20 µl virus per well was added during medium change (= 1/100 virus per well).

Adeno-associated viruses (AAV) at titer ≥ 1 × 1013 vg/ml, expressing mRuby2 and GCaMP6s under the human synapsin promoter (pAAV-hSyn1-mRuby2-GSG-P2A-GCaMP6s-WPRE-pA) was purchased from Addgene (50,942-AAV1). NPCs were differentiated to neural cells as described above and transduced by adding 1.44 µl virus solution per well in a µ-Slide 4 Well 5 days after cell seeding. For neuronal stimulation KCl was added during imaging to a final concentration of 60 mM.

Image quantification for mRuby and GCamp6

For mRuby quantification, fluorescence signal intensity of mRuby was measured in randomly selected regions of interest (ROIs) and normalized to the DAPI cell count using Fiji (ImageJ). For GCamp6 quantification: at least 20 differentiated neural cells per condition were identified and outlined as ROIs using Fiji (ImageJ). Fluorescence signal intensity in these ROIs was continuously measured over 500 s.

Cells were thawed and incubated in FACS buffer (0.1% BSA in PBS) with live/dead Fixable Near-IR staining (Molecular probes) for 30 min at 4 °C. Subsequently, cells were fixed in 1% PFA for 20 min at RT and permeabilized with FACS buffer containing 0.5% Saponin for 20 min at 4 °C. Intracellular antibodies namely Pax6, Nestin, Sox1 and Oct4 were then used for staining for 30 min at 4 °C. Cells were acquired using a LSR Fortessa (BD Bioscience) and the data were analyzed by FlowJo software (Tree Star).

Karyotyping of NPCs was carried out as described previously [11]. In brief, NPCs, at the relevant passages, were treated with 80 ng/ml colcemide to achieve a metaphase-arrest allowing for chromosome visualization. Cells were harvested, incubated for 15 min in 75 mM KCl and fixed for 30 min in a 3:1 mixture of methanol/acetic acid. Spreads were prepared on methanol-cleaned glass slides, dried overnight, stained for 10 min in quinacrine solution and analyzed using Zeiss Axioskop HBO 50 fluorescent microscope (Zeiss) and Ikaros Software (MetaSystems).

The RNA switch was prepared as previously described [8, 12]. Briefly, template DNA for in vitro transcription of normal mRNA was amplified by PCR from a vector encoding for either Barnase, Barstar, or puromycin using appropriate primers with the T7 promoter and poly(A) tail. The template of miR-302a-5p responsive OFF switch (Barstar) was amplified from the same vector by PCR using the primer containing miRNA anti-sense sequence at 5’UTR. For the miR-302a-5p responsive ON switch (Barnase), the open reading frame, poly(A) tail, and miRNA anti-sense sequence were amplified from the same vector by the first PCR. Then, the PCR product and extra sequence were fused in this order by a second PCR. All template DNAs were purified using the MinElute PCR Purification Kit. The RNAs were transcribed for 6h at 37 °C using MEGAScript T7 Transcription Kit using 1-Methylpseudouridine-5’-Triphosphate and Anti Reverse Cap Analog, ARCA. The transcribed RNA was treated with Turbo DNase I and antarctic phosphatase to remove template DNA and purified by RNeasy MinElute Cleanup Kit (QIAGEN). The concentration was determined by Qubit microRNA Assay Kit.

A day before transfection, cells were passaged as detailed above and seeded onto PLO/L521 coated plates. The following day, mRNA was transfected using Lipofectamin RNAiMAX Transfection Reagent. The transfection complex was added to the cells in a drop-wise manner and the plate was agitated before being placed into the incubator, followed by a medium change after 4h. To remove non-transfected cells, a puromycin selection was carried out by treatment with 2 µg/ml puromycin for 24h. Cells were finally analysed by flow cytometry.

Cells were seeded on 24-well plate and a serial diluted luciferin standard curve (starting concentration was 300 ug/ml) was made. After incubating cells for 10 min at 37 °C bioluminescence was measured with Tecan M1000 pro.

To determine viability of NPC after thawing and before transplantation, NPCs (150,000 cells/ml in PBS) were stored on ice and cell viability was measured using the Vi-Cell XR Cell Viability Analyzer.

All animal experiments were performed in accordance with governmental and institutional (University of Zurich) guidelines and had been approved by the Cantonal Veterinary Office of Zurich (License number: 31687). Immunocompromised recombination activating gene 2 knockout mice (Rag2−/−, n = 3), non-obese diabetic SCID gamma mice (NSG, n = 4) and wild type (wt) mice with a C57BL/6 background were used (10 – 14 weeks old, female and male, n = 10). Animals were housed in standard Type II/III cages at least in pairs in a temperature and humidity-controlled room with a constant 12/12 h light/dark cycle (light on from 06.00 a.m. until 6:00 p.m.) and food/water ad libitum. Researchers were blinded for the cell number they injected as well as for tissue collection and analysis. No randomization was performed. Number of animals used was calculated based on previous studies [13].

Cells were transplanted as previously described [14]. In brief, NPCs at passage number ≥ 11 were used in all experiments. At time of cell transplantation, GFP+/Luc+ NPCs were diluted with a final concentration of 8 × 104 cells/µL in sterile 1 × PBS (pH 7.4, without calcium or magnesium; Thermo Fisher Scientific) and stored on ice until transplantation. Mice were anesthetized using isoflurane (4% induction, 1.5% maintenance; Attane, Provet AG). Analgesic (Rimadyl; Pfizer) was administered subcutaneously prior to surgery (5 mg/kg body weight). Animals were placed in a stereotactic frame (David Kopf Instruments), the surgical area was sanitized, and the skull was exposed through a midline skin incision to reveal lambda and bregma points. Coordinates were calculated (the coordinates of interest chosen for this protocol were: AP: + 0.5, ML: + 1.5, DV: -0.8 relative to bregma) and a hole was drilled using a surgical dental drill (Foredom, Bethel CT). Mice were injected with 1.6 × 105 cells (2µL/injection) using a 10-µL Hamilton microsyringe (33-gauge) and a micropump system with a flow rate of 0.3 µL/min (injection) and 1.5 µl/min (withdrawal). In addition, serial dilutions (1.8 × 105, 1 × 105, 6 × 104, 1.2 × 104, 6 × 103) of NPCs were injected into the cortex (AP: + 0.5, ML: + 1.5, DV: -0.8 relative to bregma) to determine the minimum cell number that can be detected in vivo. Wounds were sealed using a 6/0 silk suture and mice were allowed to recover in cages with heating pads. For postoperative care, all animals received analgesics (Rimadyl, Pfizer) for at least 2 days after surgery. Stroked mice received NPC transplantations at 7 days after stroke induction as this time period is considered clinically more relevant and has shown to allow higher survival rates of the graft compared to acute transplantations into a hostile stroke environment [15, 16].

The induction of a photothrombotic stroke was carried out as previously described in wild-type (wt) mice [14, 17–20] and in NSG and Rag2−/− mice. In brief, mice were anesthetized using isoflurane (4% induction, 1.5% maintenance, Attane, Provet AG). They received analgesic (Novalgin, Sanofi) 24 h prior to the start of the procedure, administered via drinking water. A photothrombotic lesion was induced in the right sensorimotor cortex. Briefly, animals were fixed in a stereotactic frame (David Kopf Instruments) and the surgical area (from the back of the neck up to the eyes) was shaved and sanitized (Betadine, Braun). Anaesthesia was maintained using a face mask. Eye lubricant (Vitamin A, Bausch&Lomb) was applied, and body temperature was constantly kept between 36° and 37 °C using a heating pad. The skull was exposed through a midline skin incision. A cold light source (Olympus KL 1,500LCS, 150 W, 3,000 K) was positioned over the right forebrain cortex (anterior/posterior: − 1.5– + 1.5 mm and medial/lateral 0 mm to + 2 mm relative to Bregma). 5 min prior to illumination, Rose Bengal (15 mg/ml, in 0.9% NaCl, Sigma) was injected intraperitoneally. Subsequently, the exposed area was illuminated through the intact skull using an opaque template with an opening of 3 × 4 mm. After 10.5 min, light exposure was stopped and the wound was closed using a 6/0 silk suture. For postoperative care, all animals received analgesics (Novalgin, Sanofi and Rimadyl, Zoetis) for at least 3 days after surgery.

For histological analysis, animals were euthanized by intraperitoneal application of pentobarbital (150 mg/kg body weight, Streuli Pharma AG) and transcardially perfused with Ringer solution (containing 5 ml/l Heparin, B. Braun) followed by PFA (4%, in 0.2 M phosphate buffer, pH 7). Brains were postfixed for approximately 4 h in the same fixative, then transferred to 30% sucrose for cryoprotection and stored at 4 °C. Coronal sections with a thickness of 40 μm were cut using a sliding microtome (Microm HM430, Leica), collected and stored as free-floating sections in cryoprotectant solution at − 20 °C until further processing.

Coronal sections with a thickness of 40 μm were washed with 0.1 M PBS and stained with hematoxylin/eosin (HE). For pathological observation under a light microscope (Leica SP8 laser scanning confocal microscope), two views (stroke area, contralateral area) at magnification 20 × and 40 × were randomly selected from each slide.

GFAP, IBA1 and DAPI staining was used to calculate infarct area and volume. Stained coronal brain sections were imaged using the Axio Scan.Z1 slidescanner; the ischemic lesion was clearly characterized as region of microglia infiltration, surrounded by GFAP+ cells. The infarct area was outlined using Fiji (ImageJ) on five to six coronal planes per brain (from Bregma in mm; 2, 1.5, 0.5, − 0.50, − 1.5, − 2). The total infarct volume derived by multiplying the average infarct area by the distance between the sections.

Bioluminescence imaging (BLI) experiments were performed with the IVIS Spectrum CT (PerkinElmer) as described before [14]. For long-term experiments, animals were imaged in regular intervals starting 24 h after transplantation for up to 35 days. Animals used in the study to determine the minimal number of detectable cells were imaged only once 1.5 h after transplantation. 30 mg/ml D-luciferin potassium salt (PerkinElmer) was dissolved in NaCl (0.9%, B. Braun) and sterilized using a 0.22 µm syringe filter. Luciferin was injected intraperitoneally to each animal with a final dose of 300 mg/kg body weight before isoflurane anaesthesia (4% induction, 1.5% maintenance; Attane, Provet AG). Before the first BLI recording, animals were shaved on the head region. Image acquisition was performed for 20 min under the following setting: Field of View: A, Subject height: 1.5 cm, Binning: 16, F/Stop: 2. Exposure time (ranging from 1 to 60 s) was set automatically by the system to reach the most sensitive setting. Imaging parameters and measurement procedures were kept consistent within and between subjects.

In vivo BLI data was analysed using the Living Image Software (LI 4.7.3) with size-constant ROIs as described before [14, 21]. Briefly, the ROIs were manually drawn based on anatomical landmarks (eyes, ears and snout) on each image. Plotting and statistical analysis were performed using RStudio. The brain-specific signal was calculated and corrected for nonspecific signal taken from a ROI on the skin of the animal’s back and for noise taken from a ROI outside the mouse. Signal-to-noise ratio (SNR) was calculated by dividing the mean photon flux (ph/s/cm2/sr) by the standard deviation of the noise. Bioluminescent signal was calculated by subtracting the background flux from the mean photon flux. 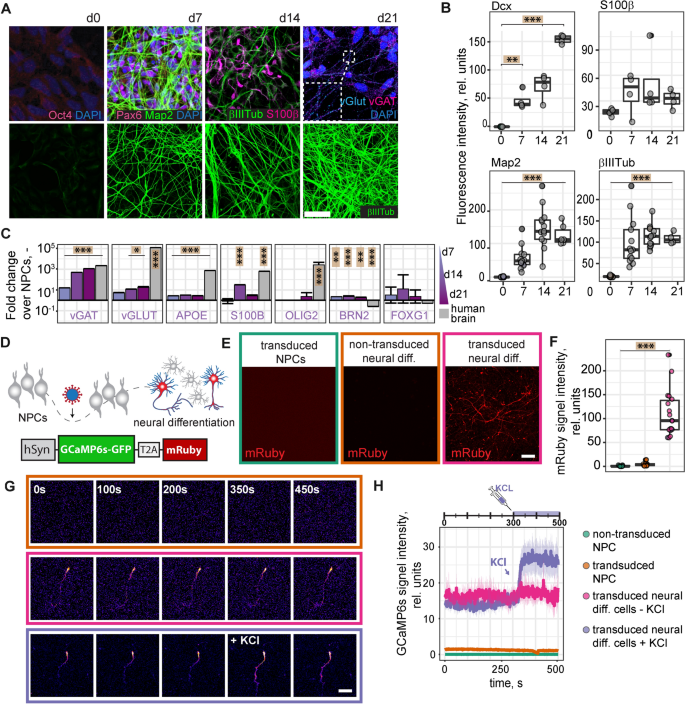 RNA switch for iPSC elimination. A: Schematic representation of RNA switch technology. RNA switch was applied to NPCs without iPSC supplementation (0% iPSC) and with supplementation of 10% and 20% iPSCs. B: Flow Cytometry dot plot of NPCs with negative control switch (upper row) and with RNA switch (lower row). C: Quantification of the remaining percentage of iPSCs in NPC cultures without (top) and with RNA switch (bottom). Boxplots indicate the 25–75% quartiles of the data. Each dot in the plots represents one cell culture well and significance of mean differences between the groups was assessed using Tukey’s HSD. Asterisks indicate significance: *** p < 0.001