dr Abdul Qader Fakhri is no stranger to conflict.

Afghans fleeing the Taliban crowd a US flight evacuating from Kabul International Airport in Kabul, Afghanistan, this past August. (Photos courtesy of Dr Sue Chadima)

Once the fundamentalist yoke was lifted, Afghanistan entered a “golden age” of modernization, explained Dr. Fakhri, program director for the Dutch Committee for Afghanistan, a nongovernmental organization dedicated to improving livestock health, welfare, and production in Afghanistan.

Robust animal vaccination and disease surveillance programs helped the nation’s livestock, which 75% of rural populations depend on for their livelihood. The Afghan Veterinary Association was established, and more than 1,300 veterinary paraprofessionals were trained to provide basic veterinary services to rural communities.

Then in August 2021, the world witnessed the withdrawal of US forces that kept the Taliban at bay. The Afghan central government quickly collapsed, and the Taliban declared the Islamic Emirates of Afghanistan. The group’s return to power plunged the country into a humanitarian crisis and quickly undid 20 years of structural progress that improved the lives of people and animals.

dr Fakhri chose to remain in the country and continue his work with the DCA. Speaking to AVMA News from his home in the western city of Herat, Dr. Fakhri said Afghans were able to endure years of conflict because they always hoped for a better future. But not anymore.

“I don’t know how we can create hope for ourselves now,” he said. “Here we are again, set back a century.”

Like most Afghans, members of the Taliban own livestock—sheep, cattle, goats, poultry—and at a basic level recognize veterinary medicine keeps animals healthy and productive, explained Dr. Raymond Briscoe, the DCA’s director of external relations in the Afghan capital of Kabul.

Drs. Briscoe and Fakhri have met with the deputy and technical deputy ministers in Afghanistan’s Ministry of Agriculture to inform them of the work being done and the current situation in the field. The ministers were very supportive. Funding at this time is very difficult to get because of the sanctions imposed and the banks not functioning properly as a result. 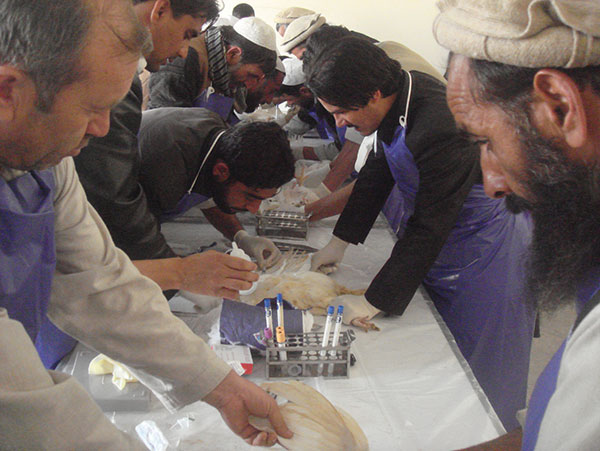 A training session is conducted on properly collecting and submitting samples from the field for analysis at the Central Veterinary Diagnostic and Research Laboratory in Kabul, Afghanistan.

In Kabul, the Central Veterinary Diagnostic and Research Laboratory is working less, as are the smaller regional laboratories, Dr. Briscoe said. The only animals vaccines coming into Afghanistan are from Iran and Pakistan because of the absence of commercial cargo flights and are of questionable quality, he added.

“You can imagine the tremendous changes that have taken place in 20 years—in education, for women, everything. And now the schools and universities are closed,” Dr. Briscoe said. “I don’t know what’s going to happen.”

During United Nations Secretary-General António Guterres’ January press conference, he admonished Taliban leadership to recognize and protect the rights of women and girls.

“Across Afghanistan, women and girls are missing from offices and classrooms. A generation of girls is seeing its hopes and dreams shattered,” he said.

dr Tahera Rezaei understood what life under the Taliban meant. She could no longer work at her small animal clinic in Kabul—the first veterinary hospital in Afghanistan owned by a woman.

As the Taliban moved through the Afghan capital, Dr. Rezaei was effectively trapped in her clinic. If she walked home unaccompanied by a man, she risked confrontation with the Taliban, who might beat her or worse.

After two days, it was finally safe enough for Dr. Rezaei’s husband, Mortaza, to come for her. They fled with their parents to the Kabul airport hoping to be evacuated by the US military. Several times the Taliban prevented them from going to the airport, but they eventually got through. dr Rezaei and her husband were allowed onto a flight but not her parents.

“We grew up with lots of problems, but we had hope for a bright future in Afghanistan,” said Dr. Rezaei, who graduated in 2011 from Kabul University Faculty of Veterinary Science. “I trained two young veterinarians, female veterinarians, at my clinic. There were always explosions, but I didn’t care because I had many goals and I wanted to try hard to achieve them.”

dr Rezaei knew that would be impossible under the Taliban, however. “I promised myself if I graduated, I would work for animals,” she said. “Why would I study for five years and then do nothing? It’s not right.”

now dr Rezaei works with Meredith Festa, who runs Paws Unite People, at an animal shelter in Long Island, New York. Festa knew Dr. Rezaei from Festa’s work with two animal shelters in Afghanistan and was instrumental in getting the Afghan veterinarian and her husband out of the country.

Ten Afghan veterinarians and 16 veterinary technicians have been evacuated and are waiting in another country until they can be brought to the United States, according to Festa. They were not safe in Afghanistan because many have husbands or wives that worked with or for the US government. “We are responsible for supporting them until a spot at a US visa processing location is available,” Festa said. 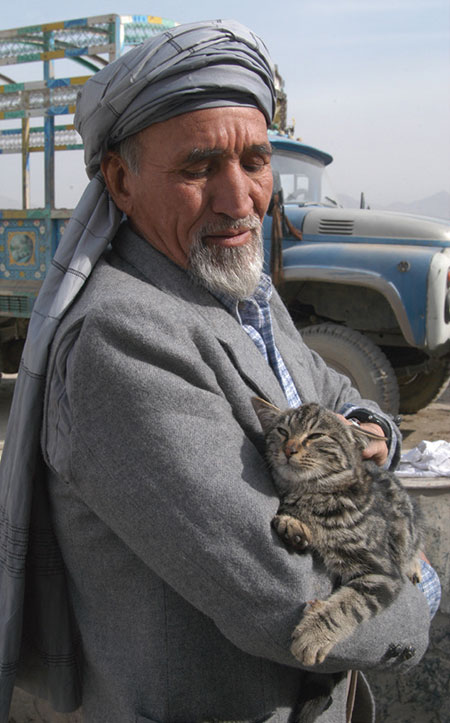 “These are my friends. I know these people. But even if they weren’t my friends, getting them to safety is the right thing to do,” she said. “If the roles were reversed, I would hope that someone would help me, too.”

More than six months after the withdrawal of US forces, no country has yet formally recognized the Islamic Emirates of Afghanistan, although in late January, it was announced the Taliban would be meeting with international representatives in Norway.

The Afghan economy was heavily dependent on foreign aid, and most international development support has been suspended since August. But humanitarian aid has largely continued. In 2021, about $1.85 billion was provided to Afghanistan, according to the UN Office for the Coordination of Humanitarian Affairs.

The US Agency for International Development announced Jan. 11 that the American government’s initial 2022 contribution will be more than $308 million for the people of Afghanistan. With this new funding, US humanitarian aid in Afghanistan and to Afghan refugees in the region comes to nearly $782 million since October 2020. At the same time, the United States froze more than $9 billion in assets in Afghanistan’s central bank, restricting the Taliban government’s Ability to pay civil service employees.

The DCA is providing limited support to fewer than 200 veterinary paraprofessionals continuing to work in 14 of Afghanistan’s 34 provinces. However, the nation’s paraprofessional workers who are government employees are not being paid.

According to a Jan. 19 report from the United Nations International Labor Organization, half a million jobs were lost in a country of 32 million people since the Taliban takeover. The ILO projects job losses will climb to at least 700,000 by midyear and possibly as high as 900,000.

Afghanistan’s isolation has resulted in a humanitarian crisis that Guterres described as an “unfolding nightmare.”

dr Susan Chadima had been assisting in Afghanistan off and on since 2005 and most recently in 2019. For two years, Dr. Chadima led the Animal Health Development Programme, a European Union project at the Afghanistan Ministry of Agriculture’s Directorate of Animal Health focused on disease diagnostics and control.

“Afghanistan is close to my heart,” Dr. Chadima said. “Our Afghan colleagues, veterinarians and veterinary paraprofessionals alike, have inspired me by their dedication and commitment to improving animal health and controlling disease. They continue to inspire to this day, even when faced with working with nothing.”

Every day, friends and colleagues who remain in Afghanistan email Dr. Chadima, asking her to help them leave the country. “It’s really hard, but we cannot forget Afghanistan,” she said. “We need to support our colleagues. We need to support veterinary medicine, and we need to remember that veterinary medicine has a broad international concern, impact, responsibility, and we need to find ways to continue supporting that in Afghanistan.”