“I still believe the high-risk pools should come first,” Bourquin said, referring to the elderly, people with underlying health conditions, and COVID-19 clinicians. “But if you get into the middle category – we’ve been classified as ‘essential’, we’ve given up ours [personal protective equipment to donate to hospitals]We are medical providers.

“And that’s where the friction came from,” he added.

Veterinarian Brian Bourquin, owner of the Boston Veterinary Clinic, was working on one of his patients at his Seaport location.Suzanne Kreiter / Globe employee

Members of many industries in Massachusetts share Bourquin’s disappointment with their place in line for the coveted vaccine, and they weren’t shy about her displeasure. The Massachusetts Veterinary Medical Association distributed a petition from Change.org, arguing that they should be included in Phase 2 of the vaccination schedule. Public library staff believe they too should be prioritized alongside educators and grocery store staff. For several weeks, funeral directors have been campaigning for Governor Charlie Baker to move to Phase 1, as their work requires regular trips to hospitals and nursing homes.

The crush intensified this week after Baker announced on Monday that residents 65 and over had been pushed to the top of Phase 2 behind people 75 and over and in front of some key workers, including K-12 teachers. Previously, people aged 65 and over were last prioritized in phase 2. The move led Merrie Najimy, president of the Massachusetts Teachers Association, to liken the process to the dystopian novel “The Hunger Games,” a bloody glove that forces communities to compete with one another for a scarce resource. “

With vaccine scarce and a more contagious variant of COVID-19 emerging in Massachusetts, competition is likely to escalate. Nora Blake, president of the Massachusetts Library Association and director of the Emily Williston Memorial Library in Easthampton, wrote a public letter to Baker last week arguing that libraries provide vital personal services, often to the state’s most marginalized residents. She argued that library staff deserve Phase 2 priority.

“Part of me was like, ‘Geez, should we be advocating this at all? ‘But I think we should,’ she said, ‘because people don’t understand the work we’re doing. “ 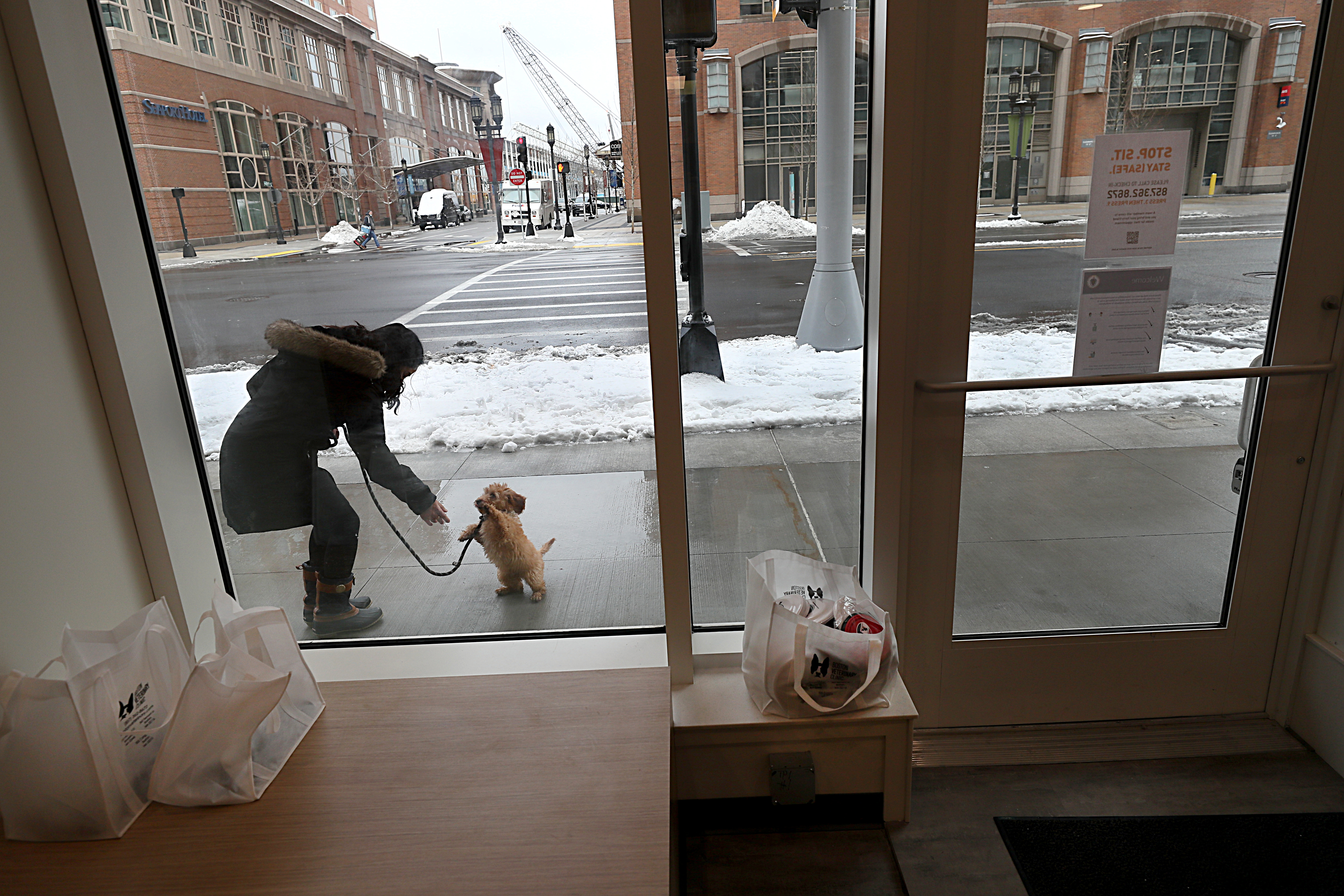 Karishma Roopchand and her 13 week old gold mini-doodle Rumi waited for the staff to take the puppy in for an appointment at the Boston Veterinary Clinic.Suzanne Kreiter / Globe employee

Dave Cellucci, an eighth-grade science teacher at Beverly Public Schools, described the state’s shift in priorities as “demoralizing” by pushing more than half a million seniors between 65 and 75 in front of K-12 teachers . Cellucci has been teaching personally on a hybrid schedule since the end of September. He sees half of his students on Monday and Tuesday and half on Thursday and Friday, which means he comes into contact with at least 50 students a day four days a week.

“My biggest concern is that the bullets we dodged in the last six months of face-to-face tuition will only last that long,” Cellucci said. Some of his colleagues have coped with COVID-19, as have students in the district. He is particularly concerned about the new, more transferable variant.

“If that gets into schools, it’ll blow up the big time,” he said. “We’re sitting on a little time bomb.”

Setting priority groups for the vaccine has been an ethical and logistical minefield for policy makers as they try to save lives, protect health care workers, and keep the economy going. While a panel of experts from the Centers for Disease Control and Prevention has made recommendations on who should get access to vaccines first – start with the frontline clinicians, they agreed, and long-term care facility residents who have shouldered the brunt of deaths – The former Trump administration ultimately shifted responsibility to states, creating a confusing patchwork of policies across the country.

And health officials have been pushed back throughout the process – from unvaccinated doctors grumbling at the sight of members of Congress with gunshots in their arms, to Massachusetts seniors outraged that they had been prioritized over people in prisons and homeless shelters.

Dr. Arthur Caplan, director of the department of medical ethics at New York University’s Grossman School of Medicine, said the system must be frustrating given the novel nature of the disease and the unreliable supply of vaccines.

CR Lyons, undertaker at Lyons Funeral Home in Danvers and president of the Massachusetts Funeral Directors Association, hopes everyone in the state who wants to be vaccinated will have a turn. However, given the slow pace of vaccination, he fears that funeral directors like him, who are routinely exposed to the disease, will suffer unnecessarily.

“Just last week I saw an article, I think it was in the globe, about the 2,000 cans that were wasted because a refrigerator was unplugged,” Lyons said. “That would have covered [first doses of] all funeral directors in the state. “

One of the directors who would have benefited from a vaccine is John Faidell of the Dahlborg-MacNevin funeral home in Lakeville. Faidell, 66, was released last week after being hospitalized for nine days with COVID-19 pneumonia. He believes he contracted the disease from a family he met days earlier to discuss funeral arrangements for their father, who died of COVID-19.

“I think our governor says we’re not exposed to this, but we’re just like the nurses and doctors. We have to go to these nursing homes and take them out of the bed they died from less than an hour ago and take them back into our care, ”said Faidell, still out of breath and plugged into a portable oxygen generator. “They say we are not first responders. We are probably as many first responders as anyone else. “