A top veterinarian has warned dog owners against feeding their pets raw meat, after a Reddit post about collecting uncooked flesh for his pups caused outrage on the platform.

The post, which has already received 12,400 upvotes and 1,100 comments, featured a picture with hundreds of containers filled with raw meat.

The poster, who went by the name cenatutu, wrote: “My dogs only eat raw meat as I believe it’s best for them but I don’t want to pay the high cost. So after ads requesting leftovers, extra, freezer burnt meat. I just made enough grind to feed my dogs for 9 months. Free.”

Feeding dogs raw meat has burgeoned in popularity over recent years, although no health benefits from it have been proven. A recent survey conducted by BMC Veterinary Research listed the reasons why some pet owners choose this diet.

The post was made on the r/Frugal subreddit, where users share their tips and stories on how to best benefit from a frugal lifestyle. The majority of the subreddit usually features tips and advice on budgeting, recycling, restoring, refurbishing and zero-waste lifestyles. However, the raw meat gambit was poorly received by the community, and the thread ended up being locked by the moderators.

One user said: “It’s a ridiculous bland. Vet tech here. We see lots of dogs in the ER with intestinal parasites and malnutrition after being fed these raw diets, it’s crazy”. Another person wrote “Right, They’re going to be feeding their dog 9 month old trash meat lol”.

A worried user raised the issue of bacteria contamination from dog to human: “Do you worry at all about your dogs spreading germs and bacteria from the raw meat? Like if they eat some and then wanna lick you? I just don’t see how it can be safe” while another one added: “Cross contaminating an entire house, yikes.”

Another angry user was outraged by the fact that the post was even allowed on the platform: “I think it’s dangerous to allow a post like this on the subreddit. Not only is a raw food diet very dangerous for dogs, but OP admitted to letting the frozen meat go through an extra freeze/thaw which only adds to the danger.”

Dogs are not different from humans in this sense and are also exposed to bacteria that can be found in raw meat.
Getty Images

While most users took to the platform to express their outrage, a few commented in favor.

One person wrote: “This is brilliant. I also feed my dogs raw, and this could save me so much money! Great Tip!!”

Commenting on their post cenatutu added that they weren’t trying to debate raw feeding and would not give out any direct advice on how to feed raw. “I do not recommend most people raw feed. I am not giving advice on here or in dms. I have scales, conversion charts, and follow a very careful nutritional formula.” the comment said

But from a medical point of view, can dogs eat raw meat?

Is it safe for dogs to eat raw meat?

While it may seem like an interesting idea to save the extra cash, feeding dogs raw meat is not safe and can pose a serious health risk.

According to Dr. Ann Hohenhaus, senior veterinarian at Schwarzman Animal Medical Center, dogs are not different from humans in this sense and are also exposed to bacteria that can be found in raw meat.

“We cook meat (of all types: fish, chicken, beef, pork, lamb, etc) to kill microorganisms that will make us sick. Ditto for our pets. That is why veterinarians DO NOT recommend diets based around raw meat,” she told Newsweek.

She also stressed the fact that feeding your dog a raw meat poses risks to human family members from cross-contamination, with the very young, the elderly, and those with cancer and other conditions at greatest risk. “The safest thing to do for all family members, human and furry, is to cook meat before eating.” 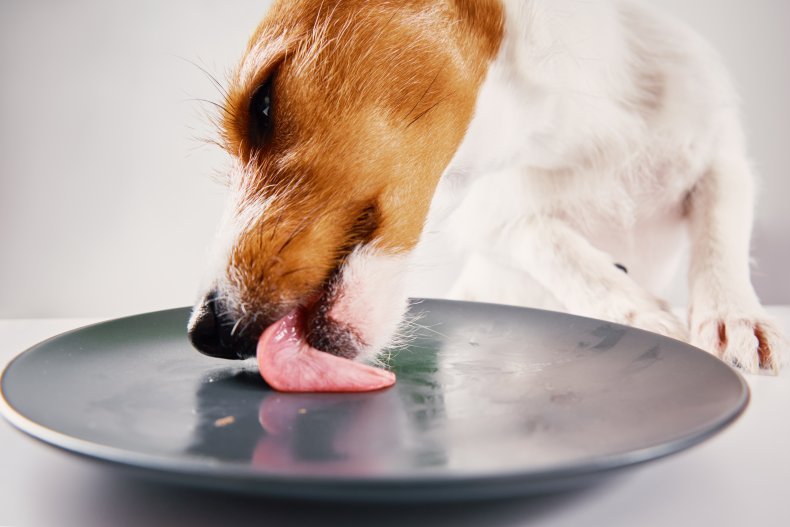 Feeding your dog a raw meat poses risks to human family members from cross contamination, for example from cutting boards, dishes, countertops and hands, which may be contaminated with microorganisms.
Getty Images