Consumer health and environmental concerns are fueling the rise of a new meat-free category: pet food.

Amid growing pet ownership fueled by the pandemic, owners want to apply their own dietary habits and values ​​to their pets and are willing to pay more for them. This has led to the launch of products from plant-based dog foods to insect treats, say executives and analysts.

“The modern consumer and pet owner wants to feed their companions the same way they do themselves,” said Michael Lavin, founder of the agri-food technology venture capital company Germin8, which specializes in animal nutrition and health. “They apply the same principles to food when making decisions about their pets.”

The factors leading to these products – the link between meat consumption and environmental damage and health concerns associated with processed foods – reflect the factors driving the rise in “flexitarianism” in humans, where consumers follow a largely plant-based diet with occasional meat consumption and dairy products.

Judy Nadel, co-founder of the vegan pet food start-up The Pack, predicts the rise of the “flexi-dogian” or dog, who eat mainly vegetarian and vegan, with occasional meat consumption. “We are currently experiencing a climate crisis. It will be unacceptable for dogs to eat meat at every meal in the future, ”she argued.

The environmental impact of pet food production is significant. Researchers at the University of Edinburgh have calculated that every year agricultural land twice the size of the UK is used to make dry cat and dog food around the world.

They found that about half of the dry food is made from grains like corn and rice, the rest from animal or fish products. Combining the results with data on the environmental impact of ingredient production, they found that annual CO2 emissions from dry feed were 106 million euros.

In terms of animal health, some owners are concerned about processed meat in dog food. “In the human diet, processed meat is known to be linked to rising cancer and obesity rates, but it’s 2021 and we continue to feed it as a main part of our dogs’ diet,” said Guy Sandelowsky, veterinarian and co-founder of the vegan Pet food start-ups Omni.

Shiv Sivakumar, left, who grew up in a vegan household, founded the vegan pet food start-up Omni with Guy Sandelowsky

Mars, which includes leading brands such as Pedigree, Royal Canin and Whiskas, launched Karma this year in the US with a “plant-first” food made with 60 percent GMO-free plants mixed with animal ingredients. Lovebug, an insect protein-based brand for cats, was launched in the UK.

The company is also one of the investors in Wild Earth, a leading US plant-based pet food start-up that is also getting into pet food made from laboratory-grown meat.

Last year, Nestlé’s Purina brand launched dog food based on ingredients such as insect protein and broad beans, as well as meat. In 2020, it bought the all-natural pet food brand Lily’s Kitchen, which also offers vegan dog snacks and dog foods made with ingredients like millet and lentils, as well as zucchini and carrots.

But there is debate about the nutritional benefits of plant-based dog foods. As obligatory carnivores that cannot digest plants properly, cats should not be given a vegetarian or vegan diet, according to the British Veterinary Association. The body did not recommend feeding a dog a vegetarian diet, although it was theoretically possible, according to Justine Shotton, president of the BVA.

“Right now, there isn’t a lot of evidence-based research on vegan pet foods that meet the nutritional needs of dogs,” Shotton said, adding that pet owners interested in a vegetarian or vegan diet for their pets should speak to their veterinarian first. She said that all owners have a duty of care to their pets to ensure they meet their pets’ needs. 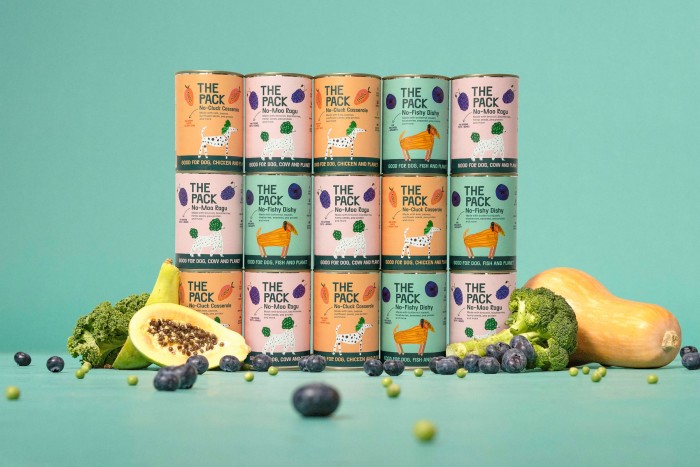 While not vegan, insect protein offers a nutritional alternative to meat while avoiding animal welfare concerns. Still, it remains an expensive option and some pet owners are resistant to feeding insects to their pets, according to analysts.

Nadel said The Pack worked with animal nutritionists and scientists to create dog foods from pea protein, papaya, kale, and seaweed. “We can get the same nutritional values ​​as meat with plant-based foods,” she said.

Mars ‘Massey said that while dogs can survive on a meat-free diet, “you need to make sure you complement each other,” adding, “It’s not that easy to say,’ I’m vegan, I want to that my pet it is a vegan. ‘ It is difficult. We spent years developing these products. “ Omni co-founder Shiv Sivakumar warned consumers not to prepare their own vegan dog food. But growing up in a vegan family in South Asia, where his dogs essentially ate what humans eat and lived to be 14-16 years old, gave him confidence that dogs could thrive on a meatless diet.

Nadel is optimistic about vegan dog food and expects 50 percent of all dogs in the UK to follow the trend of human flexitarianism by 2030. She admits that some customers want variety for their dogs and see vegan food as a complementary option.

The internet allows pet owners to try new products “and see what works,” said Massey, adding, “Some of these trends will come and go – no one really knows which ones will stay. I would say take care of this room. ”

What to Do If Your Dog Eats Chocolate