At 8 years old, Dr. Alberto Rullan’s father fell off his horse and was paralyzed for a year. While his father made a full recovery, the family lost the horse, and Rullan lost his best friend. It was in that moment he vowed to become a veterinarian.

In partnership with the World Equestrian Center in Ocala, the University of Florida College of Veterinary Medicine will open the UF Veterinary Hospital at WEC this spring. The 40,000-square-foot facility will specialize in sports medicine, diagnostic imaging, rehabilitation and after-hours urgent care.

But the “Horse Capital of the World” already provides equine care. Rullan, 41, and his brother, William, founded Performance Equine Veterinary Services in 2009. Rullan grew up on a horse ranch in a small town in the mountains of Puerto Rico. With no veterinarian in his hometown, he was inspired to help where he could. Rullan graduated from the University of Pennsylvania School of Veterinary Medicine and set his sights on Ocala.

The UF Veterinary Hospital at the World Equestrian Center nears completion with its anticipated opening date set for this spring. (Karina Wilson/WUFT News)

“I found out that if you were into horses, the only two places you could go was either Ocala or Lexington if you really wanted to be at the top of the game,” Rullan said.

On the farm, coffee, bananas and plantains were the main priority. For him, it was horses. Rullan said his long-term goal was to get to a place where horses were people’s main priority. He said he feels like he’s the voice of the horses; he understands them.

The Rullan brothers grew up riding and training horses. He said the opportunity to open up a clinic in Ocala and help as many horses as possible stemmed from his dad’s accident in 1988. Thankfully, Rullan’s father lived to walk and ride horses again, and the opening of Performance Equine Veterinary Services allowed Rullan to aid horses like the one he lost.

However, he said the business still didn’t have everything it needed to accomplish his full dream. As a result, the Equine Performance Center was born in 2017.

After obtaining a state of the art surgery suite, the center was renamed the Equine Performance Innovative Center, or EPIC. Rullan said the rehabilitation center was the next step up from Performance Equine Veterinary Services.

“The opportunity to actually take a horse from a broken leg or some bad accident and bring them back to full capacity again,” he said. “We’re quite unique in that sense.”

The veterinarian said to his knowledge, EPIC is one of the few centers in the world to have everything under one roof. But that is subject to change with the addition of the UF Veterinary Hospital at WEC. Rullan said the hospital will be a fantastic addition to the treatment Ocala already offers.

He said the hospital will specifically increase the quality of care. While the city is already world-renowned in the horse-health industry, he said more things will be accomplished than before. He said his hope is his clients can now stay in Ocala, as Rullan’s center sends cases to Gainesville for things he can’t provide through his specialized services.

Horses could be seen receiving hyperbaric oxygen therapy, walking on the water treadmill, getting laser therapy and undergoing other rehabilitative treatments under his care followed by clops of hooves and neighs of relief. Rullan said he doesn’t foresee the new hospital taking away from his business.

“They might take some small part,” he said. “But in the long run, everything will balance out, and the professional relationships should persist.”

dr Dana Zimmel, the dean of the UF College of Veterinary Medicine, shared a similar sentiment. She said she believes the local community is excited for UF to have a presence in Ocala in addition to the small animal emergency hospital.

Zimmel said her role was to work with World Equestrian Center to develop a process to work together to deliver top-notch veterinary care at the facility. She said the vision is to serve clients who’ve traveled to the center and intend to stay for several weeks.

Ocala is a growing market of small animal and equine needs, she said. Zimmel added UF receives clientele from not only the state of Florida but the entire southeast.

“I think that we will be able to provide a unique service to this group of clientele,” Zimmel said. 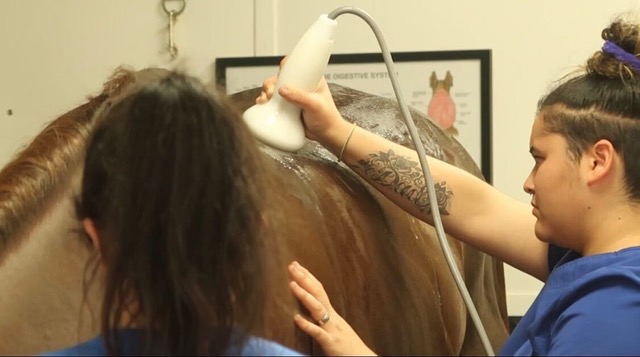 A distinct clicking could be heard from the other side of the center as a horse received laser therapy. (Karina Wilson/WUFT News)

Jacqueline Hoffman, 18, who has ridden horses for nine years and owned one for six, said the new addition offers peace of mind knowing if something were to happen to a horse, the proper care is right on the center’s grounds.

The Tampa Catholic High School senior said there is equine care readily available in Marion County, but the new hospital creates more resources. The facility offers various things for riders to do and has great footing for horses to jump in, Hoffman said.

Horses and their owners are spotted trotting all over the nearly 378 acres of landas far as the eyes can see.

Elizabeth Calabro, 20, of Tallahassee, echoed Hoffman’s words and said the World Equestrian Center is one of the coolest places she’s visited. The UF sophomore, who is an animal science major with an equine specialization, recently moved her horse, Bailey, to Ocala. She said she struggled with finding a non-emergency veterinarian in the area. Bailey needed the sharp points from her teeth removed, but Calabro said it took a week to schedule an appointment for routine care.

“I love how the concept was to build a facility that you wouldn’t have to leave during your showing there,” Calabro said. “And they actually followed through with that vision and executed it beautifully.”

the hospital is still hiring, Zimmer said. Once it is delivering patient care and client communication, she said veterinary students interested in specific areas such as equine sports medicine or small animal care will be able to complete clinical training at the UF Veterinary Hospital at WEC.

While construction is still underway, Zimmel said the anticipated opening of the hospital could be in late April or early May, but the consensus is springtime.

World Equestrian Center is the largest equine center in the United States, and with the addition of the veterinary hospital, it is likely to continue growing.

“I think that this will be an opportunity for UF to provide cutting-edge diagnostic and therapeutic modalities in Ocala, which we have never been able to do because we’ve been in Gainesville all this time,” Zimmel said. “I think it’ll be a great opportunity for us to be able to service people right there and be able to help the growth of Ocala.”