It was supposed to be a fun weekend getaway to celebrate Mandi Miller’s 30th birthday.

She and her husband, Austin Elkins, chose an Airbnb on Lake Centralia in Illinois that was dog-friendly, a must for the suburban St. Louis couple.

Just moments after arriving on an unseasonably warm September day, their beloved 115-pound golden retriever, Zeus, waded into the lake and lapped up the crystal clear water.

That night, Zeus started vomiting. At first, Mandi and Austin didn’t think too much of it. But the next morning he got worse. He was largely unresponsive and having constant seizures. So Mandi and Austin loaded Zeus into their truck on a beach towel and rushed to the nearest veterinarian.

Mandi Miller and her husband Austin Elkins pose outside their home alongside Midas, their 1-year-old Golden Retriever. In 2020 their previous dog, Zeus, died just 10 hours after ingesting toxic algae at Lake Centralia in southern Illinois.

“I remember … just asking Zeus to hold on, and that we were going to do everything we could to get him help,” said Mandi.

But the seizures kept getting worse.

“We started telling him that it was okay. That if he had to go, that he was loved and he was a good boy,” she said. “When it became very clear that he had just moments left, [we] pulled over and just held him until he was gone.”

Within 10 hours of being in the water Zeus died, having shown textbook symptoms of toxic algae poisoning.

Toxic algae is a health threat that’s lurking in more and more Midwestern lakes and ponds. The blooms are growing more common with increasing fertilizer runoff and warmer temperatures linked to climate change. Yet, like Mandi and Austin, many people have no idea whether a lake is toxic before they swim, because very few states are testing regularly.

Mandi and Austin were stunned by Zeus’ death, but having grown up in Nebraska, they had an idea of ​​what had happened.

“I had a suspicion early on that it had something to do with toxic algae,” Austin said. “Because it was something in Nebraska that, especially in the summertime, lakes were getting closed all the time.”

Within days, the couple developed symptoms, too. They had sores all over their bodies that stuck around for months. Mandi experienced gastrointestinal issues, muscle aches and vomiting. They eventually got blood work done, which showed severe liver damage.

When they returned to the lake house the day Zeus died, Austin said it looked like someone had spilled neon green paint on the surface of the water. They immediately called the Illinois Environmental Protection Agency, which sent a representative out to test the water for a toxin called microcystin.

The US EPA’s recreational health guideline for microcystin is 8 parts per billion. The test at Lake Centralia came back at 41,000 ppb. 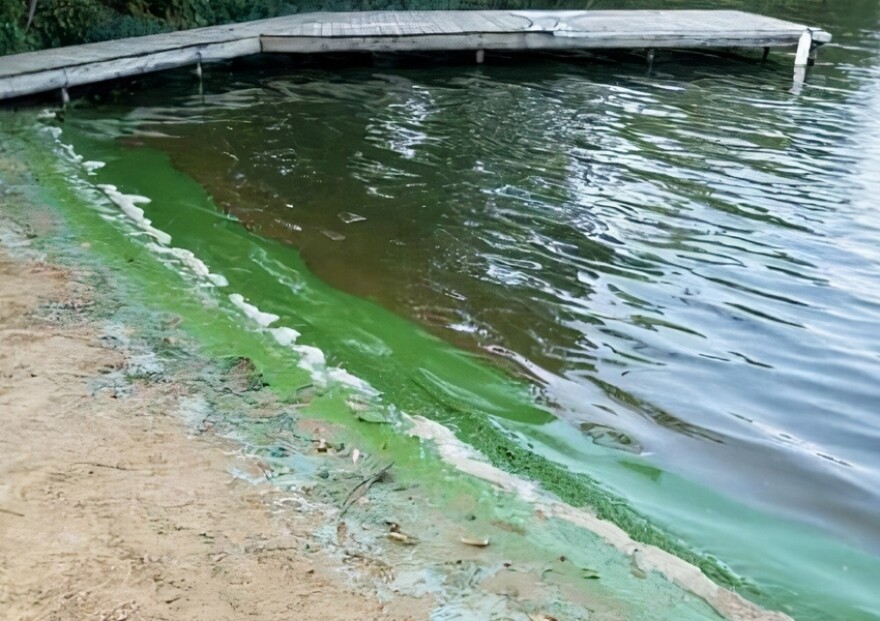 The toxic algae bloom on Lake Centralia in southern Illinois became visible the day after Zeus died. The Illinois Environmental Protection Agency tested for mycrocistin and found levels of 41,000 parts per billion. Safe levels are just 8 parts per billion.

Illinois largely relies on responsive testing of microcystin, meaning only after a suspected bloom has been reported do they test its toxicity. That means they only test a small fraction of the state’s recreational lakes.

“We’re not seeing even close to all the recreational water bodies in the state of Illinois being tested every year,” said Anne Schechinger, Midwest director of the Environmental Working Group, a research and advocacy organization. “They’re not tested necessarily every week throughout the summer, either.”

“We see algae blooms happening throughout all of the Midwestern states, and it’s not a coincidence that these states are also very agriculture-heavy states,” Schechinger said.

Some states have plans in place to reduce nutrient runoff, but few are making real progress. In fact, nutrient pollution has gotten worse in many states, largely due to increased rainfall linked to climate change. That’s contributing to an infamous dead zone in the Gulf of Mexico, but also thousands of mini dead zones more locally.

In Nebraska, regular testing is a priority. The state allocates money to testing all of its main recreational lakes — 53 in total — once per week during the summer months.

“We have a lot of lakes, we have a lot of public water, we have a lot of great public parks that people use often, you know, millions of visitors each year,” said Mike Archer, the state lakes coordinator for Nebraska’s Department of Environment and Energy. “We wanted to be able to make sure that everyone there is as safe as possible.”

The department posts results to a publicly available dashboard, which residents can check to ensure it’s safe before swimming.

The robust testing program was prompted by a situation similar to Mandi and Austin’s. In 2004, the department received a call that two dogs had died after drinking from a private pond near Omaha. A necropsy revealed high concentrations of microcystin, and almost immediately, the department helped launch the statewide testing program.

Nebraska’s testing program is costly — each sample runs about $20 to analyze, and they collect an average of 1,200 samples per year.

Archer says the program has been very well financially supported.

“Everyone understands the importance of what we’re doing,” he said. “Public health is very important to us.”

No money, no testing

Many states, including Illinois, don’t have that level of funding available for such a comprehensive testing program.

“We do not receive any general revenue funds from the state of Illinois,” said Kim Biggs with the Illinois Environmental Protection Agency. “So we are reliant on grants from the federal government and other forms of funding.”

The Illinois EPA, which oversees the testing program, does some routine testing for toxins like microcystin, but only on a small number of lakes, 4-5 times per year. They do not publish results publicly, but do issue notices if tests come back above the safe limit.

However, the agency recently received a $270,000 federal grant from the US EPA to improve its testing program. Biggs says the funding will help the agency develop a web page for posting test results publicly. 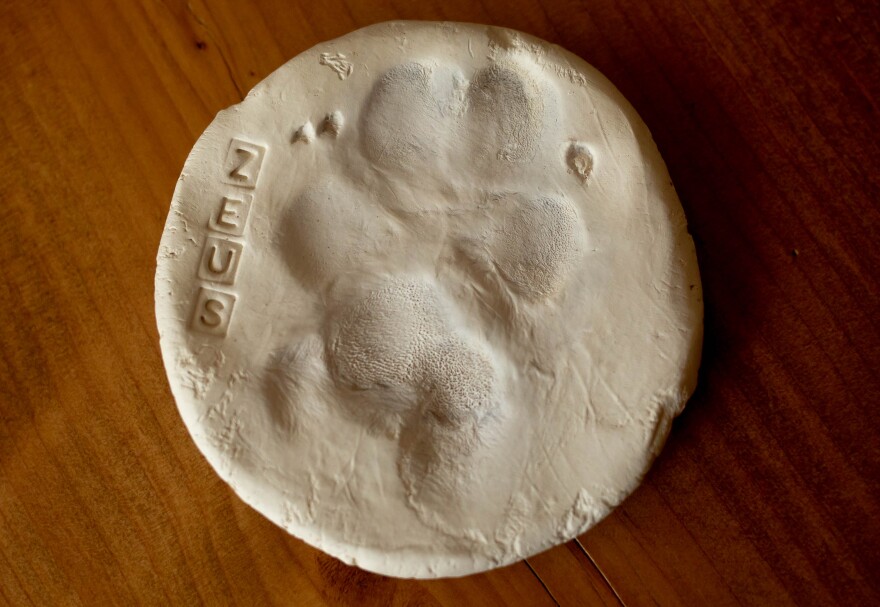 Mandi Miller and Austin Elkins have a paw print of Zeus. He died after swimming in Lake Centralia in 2020. “He was our baby,” Austin said.

Until that happens, Mandi Miller says she won’t be swimming in any Illinois lakes.

“We have to either increase testing and increase mitigation or just be very accustomed to throwing the dice whenever you get into a body of water,” she said. “And I know that I’m certainly never going to do that again.”

After all — she’s got a new golden retriever to look after. A few weeks after losing Zeus, Mandi and Austin adopted Midas.

“He had some big paws to fill, and some broken hearts, but he’s done a remarkable job.”

The Midwest Newsroom’s Daniel Wheaton analyzed data for this report.

Harvest Public Media reports on food systems, agriculture and rural issues through a collaborative network of NPR stations throughout the Midwest and Plains.