In May 2021, a cat owner reported to the vet with what she believed to be a very sick kitten. The kitten had lost most of its fur and looked thin and sick. But as it turned out, the cat was fine – she was just a wolfcat.

A wolf cat (or werewolf cat) suffers from a rare genetic mutation that causes them to sometimes lose most of their hair until they look almost like a werewolf. The cats are sometimes called Lykoi, which means “wolves” in Greek.

The breed didn’t appear to emerge in Tennessee until about 20 years ago, but was officially recognized about 10 years ago. Two pairs of wolf cats were used to create and name the breed. DNA testing confirmed that cats have a genetic mutation and also showed that the cats don’t carry the Sphynx gene – and although their fur sometimes sheds almost completely, it does grow back.

Much of what we know about wolf cats comes from some recent studies that have been done on the species. According to the researchers, the breed has what is known as hypotrichia – a congenital lack of hair caused by a decrease in the average number of follicles. The remaining hair follicles are also less able to support the hair. Existing hair is also more likely to be discolored.

Because of these mechanisms, cats lack an undercoat, and when they shed they can become almost completely bald – this can happen from time to time and owners shouldn’t be concerned, the researchers say. 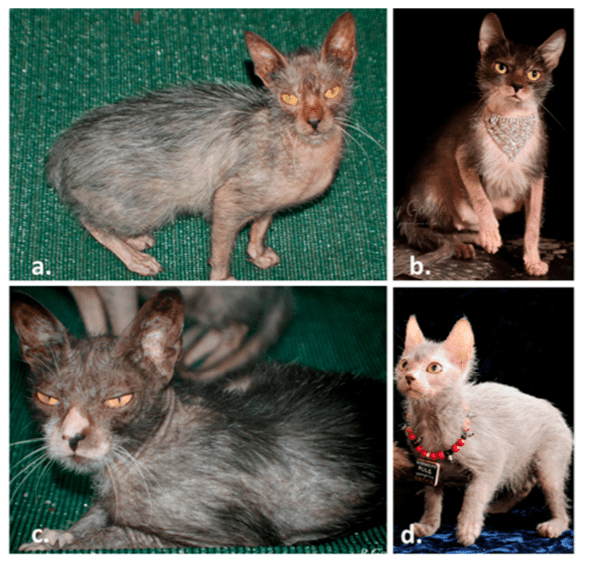 While this is somewhat similar to Sphynx cats, there is no genetic relationship between them.

The breed is still relatively new and we are learning from it, there does not appear to be any disease or health problem related to the mutation.

“The Lykoi is a recently developed novelty breed with a sparse coat and strands of black and white hair, hence named after the Greek term lycos for wolf. To maintain diversity in the founding population, breeders actively recruited cats with similar phenotypes into the breeding program, resulting in six different “basic” lines identified by 16 potential founders in this study. The breed is becoming increasingly popular due to its novelty in appearance, lack of concern for health problems, and charismatic name and character. “

Novel cat breeds are often developed, the researchers note; but new breeds are seldom as noticeable as the wolfcat – which in turn is caused by a natural mutation. However, by breeding them, we perpetuate a mutation that would likely be eradicated by natural selection.

Additionally, the popularity of novel breeds such as the wolfcat can rise and fall, and breeders usually focus on what makes the breed unique – not the health of the individuals (for example, look at all the health problems that pugs develop will ).

“The coat of cats and all mammals is a selective advantage for thermoregulation, camouflage, protection from predators and a barrier against disease. In cats, coat color and hair quality are often chosen as one of the main characteristics for the development of a new breed, ”write the authors of one study, adding that breeders often focus on a specific characteristic such as the fur coat.

“Cat breeds are generally developed through” novelty “selection. A novel trait, often an unusual coat, color or morphology, is recognized by the public and then cats with that novel trait are crossed to develop a breed. “

It’s not clear if the wolf cats have any health problems, but it would be very plausible. For example, Sphynx cats (who have no hair at all) are more prone to lung infections and other respiratory diseases due to their lack of fur. By the same token, if they spend too much time in the sun, they can develop skin cancer.

Since Lykoi cats are relatively new and there are few individuals left, there are very few studies on their health so we don’t know if they have similar or any other medical conditions, but hopefully they will be recognized as an official breed in 2017 that will change soon.

So far, the wolfcat seems to be a novelty that has enjoyed some success among breeders and has no obvious health problems. They have less fur, which probably makes them more popular with allergy sufferers, and they’re pretty cute too, in a wolf-like, lycanthropic way.

It remains to be seen whether wolf cats will become more common. But they are definitely a breed to look out for. We can only hope that breeders prioritize their health, not their looks.