Agria Pet Insurance is the largest animal insurance company in Sweden and covers an estimated 40% of the dog population25 and 23% of the cat population.2627 The study population was generated by register linkage between information from Agria Pet Insurance and official Swedish registers (held by Statistics Sweden and the Swedish Board of Health and Welfare) using the owner’s unique 10 digit national identification number assigned to all residents in Sweden.28 We received only pseudonymised data.

We identified 151 054 dog owners and 74 336 cat owners born before 1961 with an active veterinary care policy with Agria Pet Insurance at any time from 1 January 2004 to 31 December 2006 (the baseline assessment period). The cut-off at 1961 in the initial register linkage was chosen to exclude younger individuals who were at lower risk of type 2 diabetes. From the Register of the Total Population we further extracted information on 94 327 spouses or cohabiting partners of the dog owners and 41 764 spouses or cohabiting partners of the cat owners. For non-married partners, information was only available for cohabiting partners who had children in common. The spouses and cohabiting partners were also considered to be pet owners, and the term pet owner used hereafter refers to both.

We excluded 2958 dog owners and 1192 cat owners who died or emigrated from Sweden before 1 January 2007, and 5306 additional dog owners and 2428 cat owners with incomplete baseline or follow-up data or unclear emigration status. After these exclusions we had 237 117 dog and 112 511 cat owners. We then included 218 392 eligible insured dogs and 122 063 eligible insured cats and identified all owner-dog pairs and owner-cat pairs in our study population. 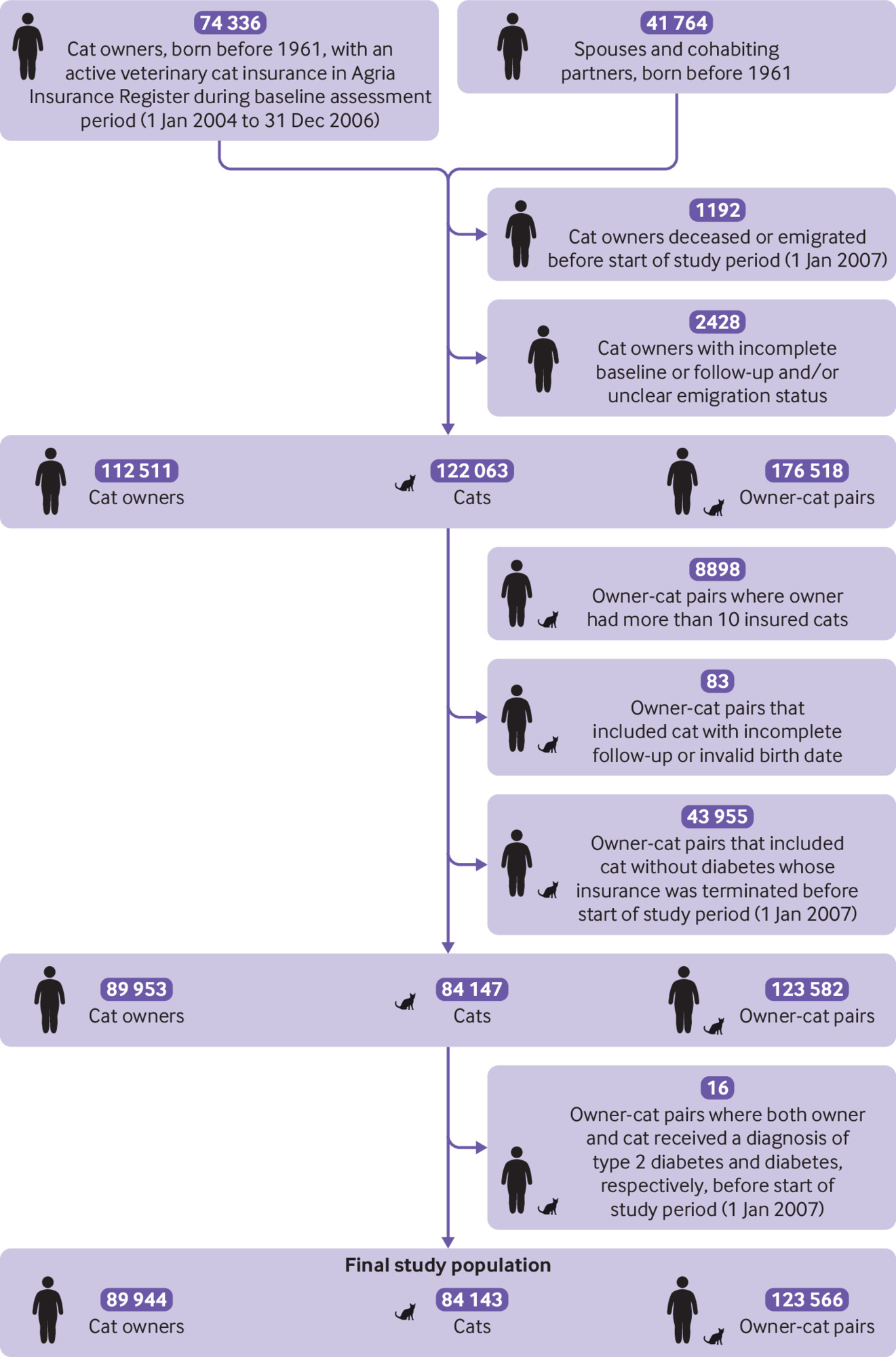 Owners were considered to have type 2 diabetes if they had a main or secondary diagnosis (international classification of diseases and related health problems, 10th revision) of type 2 diabetes (ICD-10 code E11) within the National Patient Register (inpatient and outpatient specialist care) or in the Cause of Death Register, or both. In addition, we considered owners to have type 2 diabetes if they had at least one dispensed prescription of an oral diabetes drug or a non-insulin injectable diabetes drug, or both (Anatomic Therapeutic Codes A10B and A10X) in the Swedish Prescribed Drug Register, even without registration in the other registers. These data were available from 1 July 2005. Type 1 diabetes diagnoses or insulin prescriptions were not included in our study. Information on diabetes status of the pets was extracted from the Agria Pet Insurance data. In Sweden, veterinarians report disease diagnoses to this register using a standardised coding system.29 We defined pets as having diabetes in association with claims for any of the following codes: EA234 (diabetes), EA2341 (diabetes without complications), EA2342 (diabetes with complications), and EA23421 (diabetes with ketoacidosis). For both owners and pets, we considered the first record indicating a diabetes diagnosis as the day of diagnosis.

From the Total Population Register, we retrieved information on country of birth (categorised as Sweden, another Nordic country (Norway, Denmark, Iceland, Finland, Åland, and the Faroe Islands), or a non-Nordic country) and on Swedish region of residence (south: Götaland, middle: Svealand, or north: Norrland). Baseline household socioeconomic circumstances in 2006 were extracted from the Longitudinal Integration Database for Health Insurance and Labour Market Studies,30 including highest attained education level (categorised as compulsory education only, secondary education, or university education), cohabitation status (categorised as married or cohabiting, or not married or cohabiting), population density, and income. Information on education level was only available for individuals born from 1926. Population density was defined as the number of inhabitants per square kilometre in the home municipality, whereas income represented the individual annual disposable income in Swedish kroner. Both population density and income had skewed distributions, and therefore we log transformed density and divided income into 10ths in the analyses.

Information on date of birth, date of start and end of insurance, breed, and date of death of the pets were available from the Agria Pet Insurance data. We categorised the dog and cat breeds as those with high, moderate, or low risk of diabetes in accordance with two previous Swedish large cohort studies that investigated diabetes incidence in dog11 and cat12 breeds (supplementary tables 1 and 2).

We utilised a Weibull-Markov multistate model31 in which the combined diabetes status of the owner-pet pairs during baseline determined their diagnoses in relation to diabetes at the end of the baseline assessment period (1 January 2004 to 31 December 2006). Any transitions between diagnoses were monitored during follow-up (1 January 2007 to 31 December 2012; fig 3). In accordance with the strengthening the reporting of observational studies in epidemiology guidelines, we did not do any power calculations before analyses as the study was performed in a fixed available sample.32

For each owner-pet pair, we defined the combined baseline status as no diabetes in owner or pet, owner with type 2 diabetes, diabetes in pet only, and diabetes in owner and pet. Owner-pet pairs that shared a diagnosis of diabetes during baseline were not assessed during follow-up and were excluded from analyses as they could make no further transition. During the longitudinal follow-up period, we defined a transition as when the owner or the pet received a diagnosis of type 2 diabetes or diabetes, respectively.

After the start of follow-up period, we censored owner-pet pairs at death of the owner or pet, emigration of the owner, termination of pet insurance, or end of follow-up (31 December 2012), whichever occurred first. However, we did not censor owner-pet pairs due to death of the pet if the pet had already had a diagnosis of diabetes since any further transition would only be due to change in the type 2 diabetes status of the owner.

We further aimed to assess potential bias from the decision to include owner-pet pairs with dead pets with a diagnosis of diabetes. We therefore also performed a sensitivity analysis in which we excluded all pets who died before the start of the follow-up period, regardless of their diabetes status, as well as follow-up time contributed by pet-owner pairs after the death of a pet with a diagnosis of diabetes.

All analyses were performed in Stata/MP 14 (StataCorp, TX).