EDINBURG — Ammo’s big brown eyes surveyed the training room at Canines In Action Academy, studying each individual within sight. He didn’t seem alert; more curious at the new faces in the room with him.

He laid still, his paws crossed and his ears permanently perked up like a pair of old TV antennas. Despite the small crowd in the room, Ammo is utterly nonchalant. In other words, his training is working.

Ammo, a 2-year-old German Shepherd and Belgian Malinois mix, is undergoing a transition from his former role as a working dog to that of a therapy dog. Once his seven months of training is complete, he will be the newest member of the Pharr Police Department’s mental health unit.

“He’s a dog that is trained to do a certain task that the department in this case needed him to be trained — which was to detect dirty currency,” Marty Vielma, a certified master dog trainer, said Wednesday.

Police canine Ammo listens to commands as he trains at Canines in Action Academy on Wednesday, March 30, 2022, in Edinburgh. (Joel Martinez | [email protected])

Ammo has just one month of training under his collar, but he is already responding positively to his new role. For perspective, Vielma said that Ammo could not sit still for more than a few seconds when he first began his training — a testament to Ammo’s work ethic.

Viela delivers commands in French; whereas Ammo’s commands were previously delivered in German and Dutch.

“Assistant!” Mucha calls out, and Ammo immediately sits up. “Couché!” Viela says this time, and Ammo lays back down. He again waits patiently for more commands, showing no signs of urgency.

Officer Fred Ortiz, who’s been with the Pharr Police Department for eight years, said that seeing his future partner’s calm demeanor was a far cry from the way he was before he began his training.

“You can see the difference between how he was with his drive before to how he is now — more relaxed,” Ortiz, who’s been a dog handler for four years, said. “Before you would see him in his kennel, and he was just so excited — running in circles inside the kennel. Now he just walks around. If you stop walking, he’ll sit next to you. He’s more relaxed.” 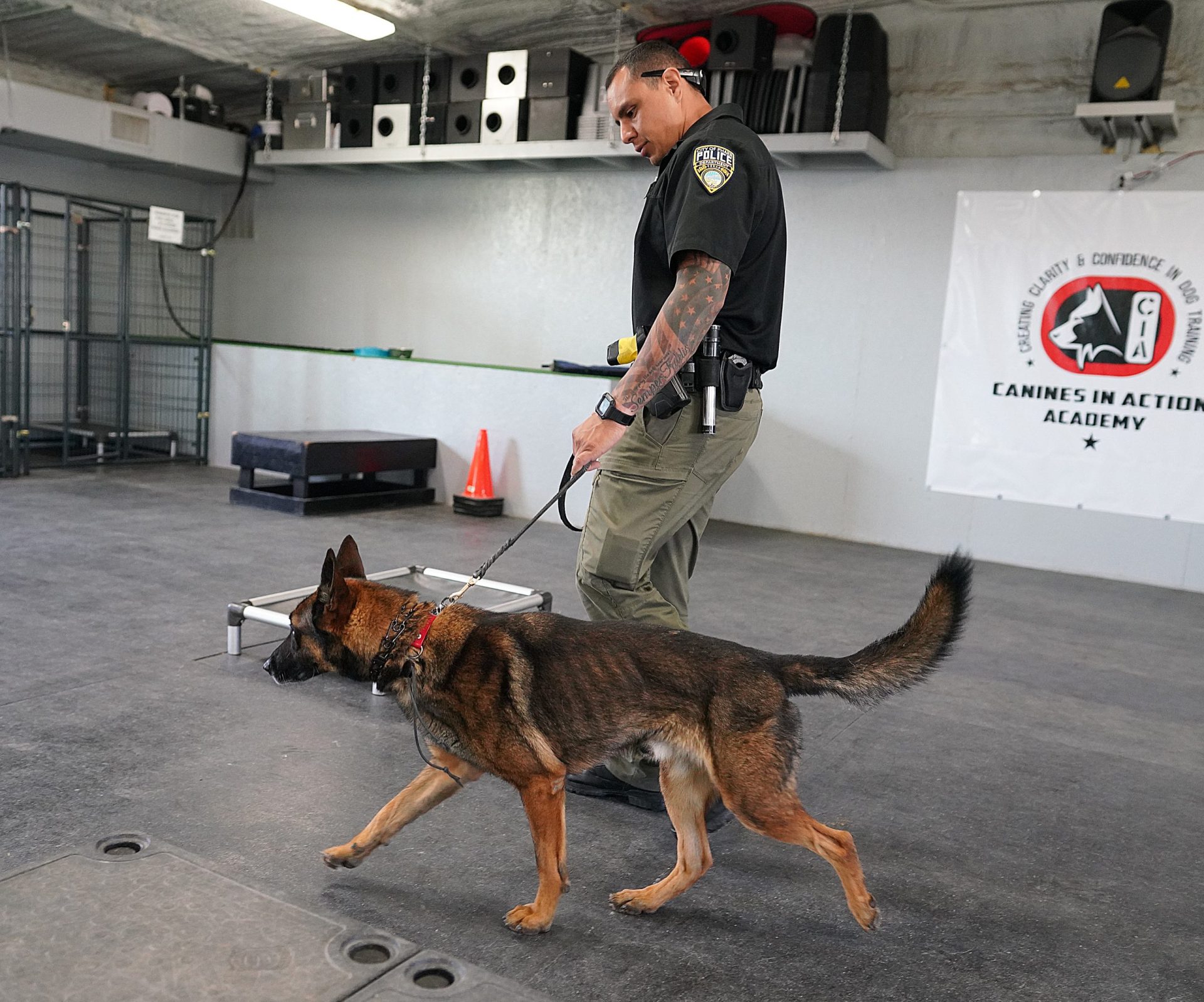 Ortiz currently works with the department’s community engagement unit, but with Ammo, the two will be providing assistance to individuals who may benefit from visits from the furry partner.

He said he is able to draw a connection to Ammo’s reacclimation due to his own experience as a marine and going from a combat environment back to civilian life.

“Vet’s coming back from a combat environment, they have to transition back to society,” Ortiz, who served in the Marine Corps from 2003 to 2007, said. “It’s the same thing that Ammo is going through. He was made to work, search, hunt, and now he’s transitioning to a more normal dog. It’s a transition he has to go through, and it’s something that I’m familiar with and a lot of vets are familiar with.

“I think it’s a good thing that we’re going to have that in common,” Ortiz continued. “It’s going to help us out there in the community.”

Wednesday was Ortiz’s first time meeting with Ammo since his four-legged partner began his training. The connection between the two was already evident in the way Ammo responded to Ortiz’s commands.

“It’s a slow transition, but people transition during difficult times in life,” Ortiz said. “They have to transition and find that peace that they have. That’s what Ammo is doing right now. He’s transitioning from that 100-mile-per-hour dog to a little peaceful canine.

“It’s a work in progress. It’s a transition for both of us.”