In addition to humans, dogs and cats also tested positive for COVID-19 (coronavirus disease 2019). Nevertheless, we do not know for sure whether pets are involved in the transmission of the severe acute respiratory syndrome coronavirus 2 (SARS-CoV-2). To date, SARS-CoV-2, the etiological pathogen of COVID-19, has infected over 173 million people and claimed over 3.72 million human lives worldwide.

To monitor the occurrence of trans-species transmission, researchers from the Institute for Diagnostic Virology, Friedrich-Loeffler-Institut, Germany, conducted a survey on the seroprevalence in domestic cats.

The researchers observed the seroprevalence in cats to be higher than in a previous study. “A doubling in seroprevalence in cats is consistent with the increase in reported cases in the human population and indicates a continued incidence of trans-species transmission from infected owners to their cats,” the researchers note in their recently published article in the journal firmly, viruses.

This study was conducted from September 2020 to February 2021 by taking serum samples from domestic cats during clinical examinations by veterinarians. Using an indirect ELISA against the receptor binding domain (RBD) of the viral spike protein, the researchers tested 1,173 samples for antibodies. The results were further confirmed with an indirect immunofluorescence assay (iIFA).

The researchers selected the samples for this study at random – without knowing the health status of the cats or the SARS-CoV-2 infection status of the owners. Therefore, this study cannot determine whether the virus caused disease in the cats.

In Germany, human SARS-CoV-2 infections are registered by the Robert Koch Institute (RKI), the German federal authority responsible for disease control and prevention.

A previous sero survey was carried out during the first wave of pandemics from February to March 2020. The researchers then detected antibodies against SARS-CoV-2 in 0.65% of the cat serum samples randomly taken across Germany. This study showed that transmission from infected humans to their cats was regular, though infrequent.

“Since the higher number of infections in humans could also lead to a higher risk of species transmission, the collection of serum samples from domestic cats from all over Germany was continued during the second wave of pandemics.” 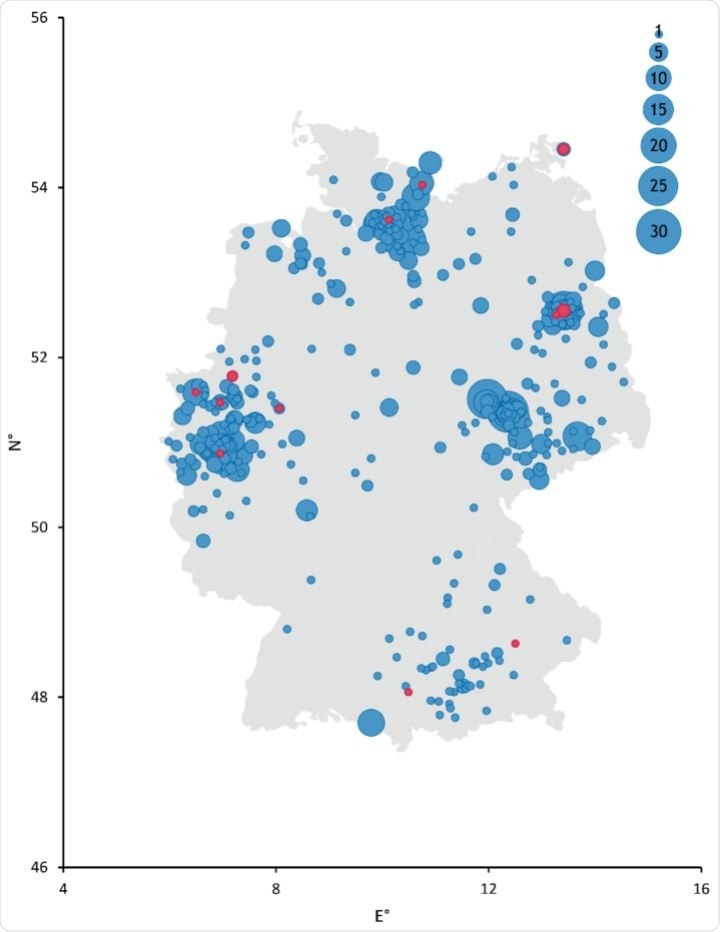 Schematic representation of collection points throughout Germany. The diameter of the points correlates with the number of samples collected from each location. Serum samples that tested positive for antibodies against SARS-CoV-2 in the ELISA and an indirect immunofluorescence test (iIFT) are colored red. Negative samples are colored blue. N ° = decimal degrees of longitude and E ° = decimal degrees of latitude.

The seroprevalence tested on the cat’s samples during the second wave of the COVID-19 pandemic is almost twice that of the first wave of the virus. The researchers inform: “For comparison, the number of registered human infections increased from 289,189 cases at the end of September 2020 to 2,442,336 at the end of February 2021, which corresponds to a more than eight-fold increase in the total number of registered human cases in Germany over the course of the second wave the pandemic. “

Specifically, the researchers observed that the highest rates were found in January (2.15%) and February (2.50%) 2021. This is exactly one month after the virus was found to have doubled in the human population within a month.

They also found that only a few of the animals infected with SARS-CoV-2 were found to have neutralizing antibodies.

Overall, it can be seen from this study that the survey carried out during the second wave shows that there is regular cross-species transmission from infected humans to cats.

During such a pandemic period, this study raises important implications for the handling of home-owned cats by people who may or may not be infected with SARS-CoV-2. This also underscores the need for further study of antibody kinetics and immune responses in cats.

The doubling of the seroprevalence detected in the domestic cat population follows the increase in registered cases of SARS-CoV-2 infections in humans, but not to an extent that suggests an increase in the frequency of trans-species transmission, the researchers write.