The virus that causes COVID-19 had infected nearly 5 million people worldwide and killed about 322,000 people by the end of May. The virus has left no area untouched, including the veterinary profession. The following stories represent only two of the people who died during this pandemic. You can find her obituaries in this issue.

Dr. Peter Sakas (Illinois ’83), a veterinarian at the Veterinary Clinic and Bird Medical Center in Niles, Illinois, died of COVID-19 on March 30. In his work he focused on wildlife veterinary medicine. Those who knew him said he was charismatic, had a great personality, and cared deeply for his customers and their animals.

“He had such a loyal following that there were customers who drove from out of state in several hours to see him for an appointment,” said his daughter, Courtney Sakas, MD. “My uncle recently told the story that Elizabeth Taylor once sent her bird to my father’s clinic in a limo to be seen by him.”

Dr. Courtney Sakas said her father was an active member of the veterinary community. He traveled frequently to conferences, veterinary schools, and local elementary schools. On Saturdays, students shadowed him so they could learn firsthand about veterinary medicine.

Dr. Peter Sakas specializes in avian veterinary medicine. In fact, birds were the whole reason he became a veterinarian. Dr. Sakas found a small, injured bird when he was young and tried to nurse it back to health.

“He has carried the same compassion throughout his career,” said Dr. Courtney Sakas. “He often took on cases that others thought hopeless because he was a firm believer that all animals have souls and deserve to be given a chance.”

Dr. Peter Sakas even wrote a book on caring for birds, “Basics of Avian Medicine: A Practitioner’s Guide”.

Dr. Sakas had no plans to retire. He wanted to keep working. Then on March 20th he showed symptoms.

“A lot of attention has been paid to the frontline health workers, but I think people often forget that vets are front line workers too,” said Dr. Courtney Sakas. “My father told us that he would never retire because he loved his job so much. I knew he would keep working as long as possible to keep taking care of the customers and animals he loved, even if it meant putting himself in danger. “ 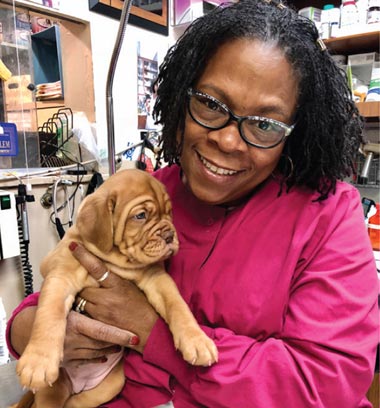 She was the only black person in her class, an experience she described as “bittersweet” according to her sister Sheila Butler, MD.

In her professional life, Dr. Julie Butler a kind of vet who never turned an animal away.

Dr. Butler co-founded New York Save Animals in Veterinary Emergency, a nonprofit that sponsors pets in need of emergency care. She was also President of the New York City VMA. She served the Harlem Ward for over 30 years and used her experience to train and mentor other veterinarians.
Dr. Butler was a lifelong student. She loved expanding her knowledge in both veterinary medicine and as an artist.

“It was amazing to see how quickly she could acquire a new skill,” said Alex Howard, a cook and Dr. Butler’s son. “She even started to master Thai cuisine. … We have experimented a lot and created many great meals together. “

“On Thanksgiving and New Years Day, everyone would be waiting for the cake to be ready so they could enjoy it or maybe even take something home,” said Howard.

“DR. Butler was the kind of vet who was very concerned about their job and its impact on others,” she said.

“She showed a rare confidence that comforted the unknown,” said Zachary Butler-Jones, her nephew and veterinary technician. “She would refer to necessary texts, make a game plan, and carry out the process, even if she had never done it before. That trust would never lead to arrogance, however, and she has made sure her ducks are always in line when it comes to her patients. “