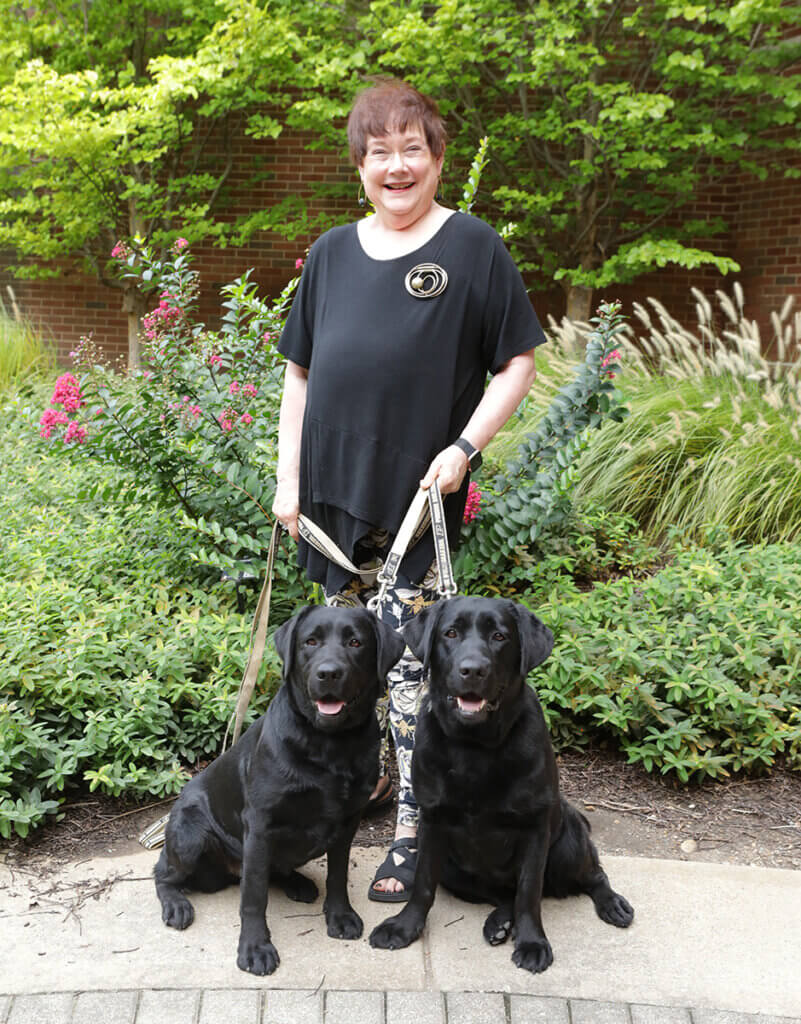 Joanne Troutner with her two dogs, Billie Sue and Brandy.

When the Purdue University College of Veterinary Medicine launched its fundraising effort to secure support for the new Purdue University Veterinary Hospital facilities, it was at the time of its 60th anniversary in 2019. The need was for donors to step forward as leaders and “set the pace” for raising the needed private funds for the new hospital project. So, the college created the 60 Pacesetters giving initiative, connecting the occasion of the 60th anniversary with the call for donors to provide leadership gifts.

One of the first individuals to respond was Purdue alumna Joanne Troutner, a graduate of the College of Liberal Arts, who is an animal lover and longtime friend of Purdue Veterinary Medicine. Setting the pace as a leader in giving to the college suited Joanne perfectly, and she provided a wonderful example when the campaign needed it most. Many others also stepped forward at that time and in the months that followed and the campaign proved wonderfully successful.

Today, you can see evidence of Joanne’s pacesetting role in giving to the college when you step into the Joanne Troutner Reception Area at the front of the brand new David and Bonnie Brunner Small Animal Hospital. But her pacesetting giving extends to many other areas, both in the College of Veterinary Medicine and across the University. Her giving also not only involves financial donations, but also gifts of time and talent.

Joanne’s generosity reflects the reality that for her, Purdue University is more than her alma mater. It’s a family. “How could I not want to give back?” she asks in a story on The Persistent Pursuit website that shares inspiring features about Purdue graduates.

Joanne earned her bachelor’s degree in English and media science at Purdue in 1974 and then pursued graduate study, earning her master’s degree in library science two years later. She describes Purdue as a launchpad — “A place where I was allowed to be excellent.”

She went on to have a decades-long career as a K-12 educator, which only makes her passion for giving back to Purdue burn brighter. “Being an educator, you look at how can you impact the future. What can you do for students?” Joanne says. “Purdue gave me a lot. So they’re entitled to expect me to do a lot.”

Joanne describes herself as someone who thinks broadly, and today she is translating that into giving broadly. She is one of the University’s most frequent, and most passionate, donors.

Through her giving, Joanne supports diverse areas across Purdue’s campus, including the library system, a number of student scholarship programs (including one in the College of Agriculture named for her parents and another in the history department named in honor of her husband, Lary W .Troutner), and the Purdue Women’s Network, as well as the College of Veterinary Medicine.

“The Troutner kids have always been four-legged, so they go to Purdue as their vet,” she says. “Of course I would support the vet school.” 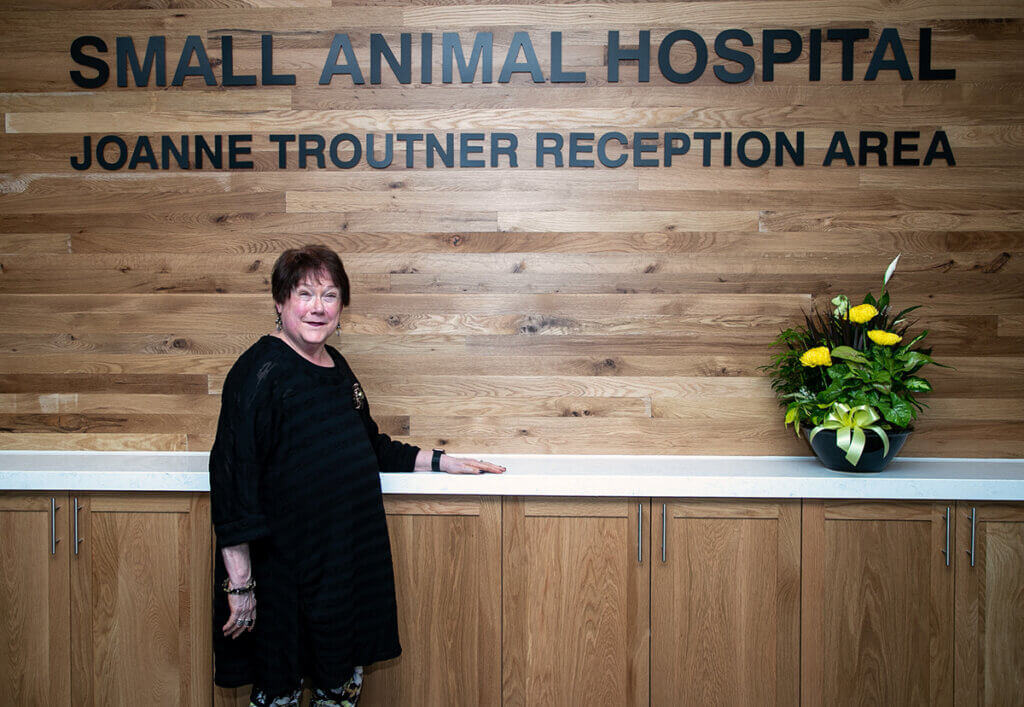 Longtime friend and supporter of the College of Veterinary Medicine, Joanne is pictured in the David and Bonnie Brunner Small Animal Hospital reception area named in honor of her generosity ahead of the hospital’s dedication ceremony on April 8.

For Joanne, supporting the University is about securing the future and sustaining the community. “That is the heartbeat and foundation of our University,” she says. “Without those relationships, you don’t learn. You don’t progress. You don’t pursue excellence.”

Joanne met her husband at Purdue when the two were undergrads, and the University remained integral to the Troutners until Lary’s passing in 2011. And to this day, Joanne stands tall among the University’s most enthusiastic supporters.

Joanne’s interests include wanting to do her part to make the Boilermaker community — the Purdue family — as welcoming and inclusive as possible. “I felt it was very important to have an opportunity to give back in the area of ​​underrepresented students, staff, and faculty,” she says. “We need to be ready to prepare leaders. It’s essential that Purdue continue their pursuit of excellence by including underrepresented students and faculty and staff.”

One of Joanne’s biggest passions is mentoring young Purdue women. “It’s just part of who I am,” she says. “I wish I had someone do that for me when I was that age.” She also is quick to point out that she has learned just as much from students she has mentored as they have from her.

Looking to the future, Troutner is optimistic. “I see Purdue is still a leader across the nation. I see Purdue pursuing excellence. I see Purdue taking those giant leaps — sending the first person to Mars, making a vast number of improvements in medicine, from the Cancer Research Center to veterinary medicine to biology. The future’s so bright, because of our students and the caliber of students that we recruit.”

Ultimately, that impact is what it’s all about for Troutner. “You leave your legacy; you give back to areas that are your passion — what you find important and impactful.”

Click here to view the entire feature article about Joanne, which includes video clips from an interview she did this spring with one of her mentees, Molly Grotjan, a graduating senior with a major in agribusiness. In the interview, Joanne shares about the importance of relationships as the foundation of the Boilermaker community; the importance of giving, regardless of the amount; and her hopes for the future of the Purdue community.

A Great Medicine for Animals, Plants and Humans

The importance of telehealth and virtual care in veterinary medicine