Neil McMahon is a limerickman who has lived in Iceland for five decades. After graduating from University College Cork with a degree in history and archeology, he went there as a postgraduate. After teaching at all levels of the Icelandic education system, McMahon is now a leader in Iceland and East Greenland

On a stormy day in September 47 years ago, I boarded a Pan Am flight from Shannon to Chicago for a brief stopover in Iceland. I realized that I was the only passenger to get off there, a land supposedly discovered by St. Brendan in the sixth century.

Although it was almost half a century ago, I can still vividly remember many of my first impressions of Iceland: exiting Keflavik International Airport through a US military checkpoint; the rugged treeless landscape formed by volcanic activity; the locals speaking at breakneck speed in a language I couldn’t understand a word of, and the big American cars I’d only seen from movies.

So here I was in Iceland in the early 1970s, a young fellow from Limerick, fresh from UCC with a degree in history and archeology and an H dip. A one-year study with a scholarship at the Icelandic National University was imminent.

First there was a three month intensive course in Icelandic, not the easiest language. Icelandic is a strong language, and due to the country’s isolation over the centuries, it has retained many of the archaic features of Old Norse. My arduous progress in those first few months meant it took me forever to string a few coherent sentences together.

But while my inability to express myself adequately in Icelandic was frustrating, there was much to please the heart. There was regular outdoor swimming in the geothermal waters of the neighborhood pool and my first sight of the aurora borealis illuminating the arctic winter sky. There were horse rides along long coastal beaches and my first hike to the Snæfellsnes Glacier, which was immortalized in Jules Verne’s Journey to the Center of the Earth.

After my year was up, I had to decide what my next step would be. I knew that teaching jobs were rare in Ireland and I felt that my progressive views were not going to go down well with conservative Catholic management. As I was leafing through the local newspaper, I saw an ad for an English teacher at a new secondary school and decided to apply. A few days later I was called for an interview and got the job. As I left the principal’s office, I never imagined that I would end up teaching at this school for more than four decades and being its longest-serving teacher.

In the classroom, I was surprised by the relaxed atmosphere. Here an environment was devoid of the you-and-us antagonism that all too often exists between students and teachers. Teachers and students used first names. In Iceland it is customary to use first names regardless of social rank or social position.

Descendants of farmers and fishermen, Icelanders are the salt of the earth, but like any other nation, I’ve discovered that they have a quirky side, at least when it comes to dogs and beer.

I soon realized that not a single dog was to be seen in town; Apparently, dogs were banned in Reykjavik from 1928 to 1978 because they were considered farm animals and therefore unsuitable for city life. Dogs, too, have often had the tapeworm echinococcosis, which can be transmitted to humans and cause serious health problems.

A more immediate concern was realizing that there were no bars and no beer. The beer ban lasted from 1915 to 1989 and was largely politically motivated, similar to the GAA’s ban on international games. Beer was associated with the colonial power of Denmark and was therefore considered unpatriotic to drink. 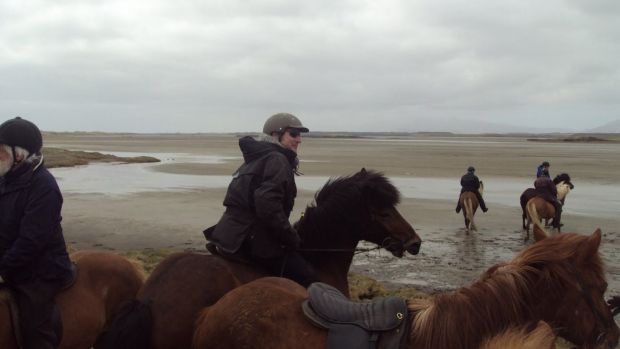 Neil McMahon rides an Icelandic horse on the beaches of the Snaefellsnes peninsula on Iceland’s west coast, Iceland

In 1996, the school staff traveled to Greenland as part of a four day trip to learn about the Greenlandic education system and to explore the south east of the country, where Erik the Red founded the first Nordic colony in AD 985, beauty of Greenland and very curious about the history and culture of the beauty of Greenland Native people. This was a place I dearly wanted to return to.

All Icelandic teachers are eligible for a one-year paid sabbatical during their careers, so I returned to university in 2010 and qualified as a tour guide. Here was a job I could do full-time during my summer vacation and also after my retirement. As luck would have it, I got a job with a US company that offers extensive tours in Iceland and Greenland. After West Clare, East Greenland has become a second home, and for the past ten years I’ve made two or three trips there every summer.

According to Nordic mythology, the three Norns (mighty virgins) at the foot of the tree of life spin the threads of their own fate into an artful tapestry. Like everyone, I have no idea when they’ll cut the thread and end my life. So far, however, I am not dissatisfied with the interesting and unexpected pattern they have chosen to weave.

If you live abroad and want to share your Irish Times Abroad experience, send an email ausland@irishtimes.com with some information about you and what you do