Flint, a dog owned by Jaye Foucher who was seriously injured after being hit by a truck on January 19, 2022. Photo courtesy of Jaye Foucher

On Wednesday, musher Jaye Foucher was on a training run with her team when the dogs were hit by a truck near mile 75 of Parks Highway in Willow.

It’s one of a musher’s worst nightmares. Just after 2:00 p.m. Wednesday afternoon, Jaye Foucher took her team for a run. In this area of ​​Willow, one of the main trails runs alongside the Parks Highway, and it’s not uncommon to see a dog team driving by. Foucher says in an area where the track hadn’t been broken since the last snow, her guide dogs veered onto the freeway because they saw it as an easier route.

“I’m not sure what made the decision that the road looked easier than the uninterrupted path and they just jumped over the snowdrift and ended up on the road.”

Foucher says she tried to call the dogs back onto the trail and then prepared to use a snow hook and physically get them back on track, but by then an approaching truck was too close.

Foucher says the truck’s driver may not have seen the team or them waving because the truck didn’t slow down before it reached the dogs. It stopped after hitting the team just behind the leaders.

A passer-by saw what had happened and came to Foucher’s aid. She says in the chaos of the moment she didn’t ask his name but wanted him to know he was valued.

“Whoever was the Good Samaritan who stopped to help me, I want to say ‘thank you very much.’ I couldn’t get his name out.”

Foucher says the driver’s identity is also not known because he left the scene before Alaska State Troopers arrived.

One member of the team, Noddy, died at the scene and another, Felicity, was missing Thursday afternoon. Seven dogs were examined by a veterinary clinic and later released, but two, who sustained more serious injuries, were still hospitalized as of Thursday. One of those dogs, Flint, had already had surgery for serious leg injuries.

“His front legs were seriously ripped to the bone, so he’s wearing two splints. And he had to have his tail amputated because it was pretty battered and they couldn’t save it.” 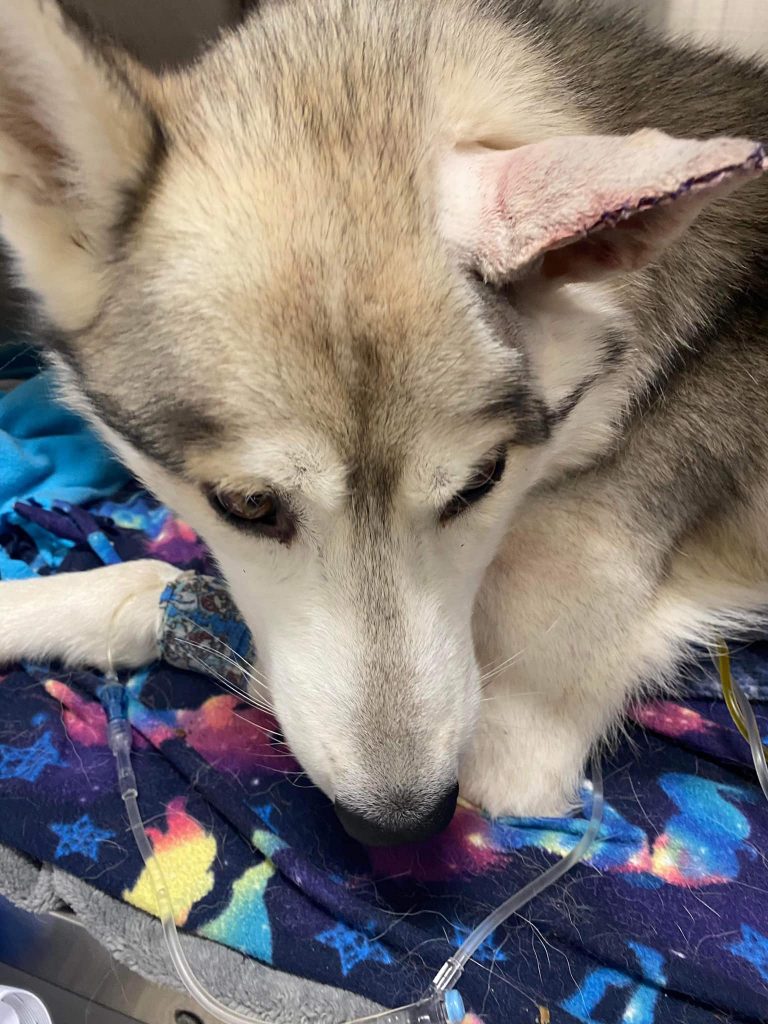 Kona, a dog owned by Jaye Foucher who was seriously injured after being hit by a truck on January 19, 2022. Photo courtesy of Jaye Foucher

The other seriously injured dog, Kona, has a fractured pelvis, according to Foucher, and it’s not clear what his recovery will require.

Amid the tragedy, Foucher says there has been a huge outpouring of support from the Willow community, with people using snow machines to search for the missing dog on Wednesday and Thursday while the light permitted.

One of those Wednesday volunteers was Karin Hendrickson, a musher who was also hit by a vehicle while on a training run near Parks Highway in 2014. Although Hendrickson suffered serious injuries herself, she was very thankful that her dogs were unharmed in the incident.

“That was my salvation. I know Jaye is really struggling right now. Of course, most people know that our dogs are our family and our teammates… and they have so much emotion in them. It’s terrible.”

Foucher says that in addition to local people, people from outside have found ways to help, including feeding staff at the Tier 1 Veterinary Medical Center.

Someone actually sent the entire vet clinic coffee and donuts this morning as a thank you for all their help yesterday and today. And the financial support to help us recover and pay the vet bills – I obviously wanted my whole team checked last night.”

Foucher is signed up for next week’s Willow 300 race as well as the 2022 Iditarod. For now, she says, the main concern is looking after the team’s health, including finding Felcity and getting her to a vet.

A GoFundMe was set up on behalf of Foucher on Thursday morning. Within hours, it had raised nearly $17,000.

Foucher describes Felicity, the dog missing since Thursday afternoon, as petite and weighing about thirty-five pounds. Their coloration is mostly cream with a gray stripe down their spine. Felicity may still be wearing her purple harness. Foucher says community members are helping to bring Felicity home with live traps and that she has been seen more than once since the accident. If Felicity is spoken to, she’s likely to run away, and Foucher says the hope is she wanders off to someone’s house or dog run where she can be picked up and examined by a veterinarian. 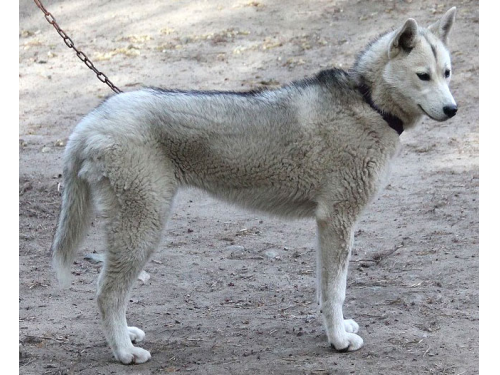 Felicity, the dog who is still missing a day after Jaye Foucher’s team was hit by a truck near mile 75 of Parks Highway.