Enlarge / Chicago’s Shedd Aquarium teamed up with Northwestern University microbiologists to find out why chloroquine keeps disappearing from the water in the quarantine habitat.

The Shedd Aquarium in Chicago, founded in 1930, isn’t just a popular tourist attraction. Its staff also assist in global conservation efforts and conduct fundamental research on animal health and behavior, nutrition, genetics, aquatic filtration, and molecular and microbial ecology. For the past four years, these staff have been puzzled by the mysterious disappearance of an anti-parasitic drug that is routinely added to the water in the aquarium’s quarantine habitat. Now, with the help of Northwestern University microbiologists, they’ve cracked the case. The culprits: about 21 members of a family of microbes who regularly chewed medicine in water, according to a recent article in Science of the Total Environment.

The aquarium’s conservation and research center includes an animal care and science department with a state-of-the-art veterinary clinic to monitor the health of all animals in the exhibits and any treatment required. (If you want to know how to give an MRI to an electric eel, the center’s team is there for you.)

Since 2015 the center has been working on a special research project to study aquarium microbiomes. The project deals, among other things, with the investigation of microbial communities in aquarium biofilters. Such closed water systems can quickly become toxic thanks to the ammonia waste from the fish, and certain microbial communities can help keep these levels in check. However, other microbes are less useful, as the case of the lack of chloroquine shows.

Whenever the Shedd Aquarium acquires new animals, the creatures are first moved to the quarantine habitat to prevent them from introducing any outside pathogens into the carefully controlled environment of the aquarium. Part of this process involves administering chloroquine phosphate, usually by adding it to the water of the habitat. Staff regularly monitor chloroquine levels and found that these levels were usually much lower than expected – often too low to be effective anti-parasitic drugs.

Enter co-author Erica M. Hartmann and her fellow microbe detectives from Northwestern University. They took samples of the water in the quarantine habitat as well as swab samples from the walls and pipes of the habitat. They brought the samples back to their laboratory for full analysis. All in all, they counted around 754 different microbes that called the habitat home, and the team quickly suspected the chloroquine thief was among them. 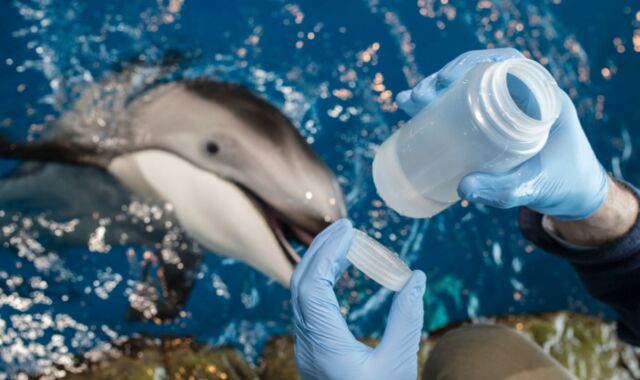 Next, the researchers had to filter out the suspects. First they took cultures of each microbe and gave each one only chloroquine as food. Unfortunately, these results have not narrowed the field that much. But their chemical analysis of the chloroquine residue revealed a critical clue: all of the nitrogen was missing.

“Carbon, nitrogen, oxygen and phosphorus are basic needs that everything needs to be alive,” says Hartmann. “In this case, it looks like the microbes are using the drug as a source of nitrogen. When we looked at how the drug was broken down, we found that the piece of the molecule that contained the nitrogen had disappeared. It would be the equivalent of just eating the pickles out of a cheeseburger and leaving the rest behind. “

Finally, Hartmann et al. were able to identify 21 potential offenders thriving in the habitat’s tubes, some of which appear to have not yet been investigated. It is still unclear which of them is sucking up all of the nitrogen in the chloroquine, but at least the aquarium now knows that the problem is in the pipes. Unfortunately, simply flushing these pipes regularly isn’t likely to fix the problem because the microbes are stubbornly clinging to the sides. According to Hartmann, the habitat pipes will need to be scrubbed or possibly replaced entirely. Switching between freshwater and marine water could also help keep microbial populations in check in the future.

“Overall, our results expand the knowledge base on the microbiome of aquariums and the degradation of veterinary drugs and show how microbial ecology and chemistry can be integrated into the future management of saltwater circulating enclosures,” the authors concluded. “In addition, these results could shed light on phenomena that occur in other nitrogen-limited environments when nitrogenous anthropogenic chemicals are added.”