Bone broth is one of the oldest foods known to man, with the first recorded instance of the dish’s preparation dating back almost 2500 years. The dish was consumed all over the world as a means of eating the whole animal, head to toe, since hunting often had a low success rate.

If you’re looking for an easy way to add more nutrition and umami flavor to your meals, broth should definitely be on your list. Broths are created by simmering different types of meat or animal bones in water. This method extracts proteins from the bones, namely gelatin and collagen, along with a host of other nutrients, including vitamins, minerals, and amino acids. Broths are also low in calories, making them an excellent choice if you’re trying to lose weight or eat healthier.

Bone broth is one of the oldest foods known to man, with the first recorded instance of the dish’s preparation dating back almost 2500 years. The dish was consumed all over the world as a means of eating the whole animal, head to toe, since hunting often had a low success rate. Experts think that these early humans made the broth by placing hot rocks on animal carcasses to draw out juices, later using a pot to improve efficiency. The dish continues to be a mainstay in both European and Asian cuisines, often as a base for other dishes. The Greek physician Hippocrates recommended consuming bone broth to remedy digestive issues. The liquid was also used for medicine in the east, with several bone broths still used in traditional Chinese medicine today.

The Americas were the last to get wind of the golden liquid, being introduced to the dish only in the late 17th century by Jewish immigrants. For centuries, Jewish communities consumed the dish as a way to cope with the cold and as nourishment for the ailing. The first Jewish immigrants in the country were doctors, who considered the amber liquid to be a panacea that could cure any ailment, from indigestion to leprosy. “Jewish Penicillin” would henceforth become popular across the country, hailed as a godsend by the poor and the sick. It wasn’t long before the broth penetrated other sections of society, with chefs across the country using it as a means to flavor foods, making it an integral part of several American cuisines. With the advancement of pharmacopeia, this would remain the liquids’ primary use case, up until the introduction of MSG in the early 1900s. This would see the humble soup become almost obsolete in the few decades leading up to the 1960s, after which it gained traction as a key part of several fad diets that revolved around demonizing carbs. The broth would also make a return as a flavorant since MSG was considered toxic following several consumer complaints towards the end of the decade. 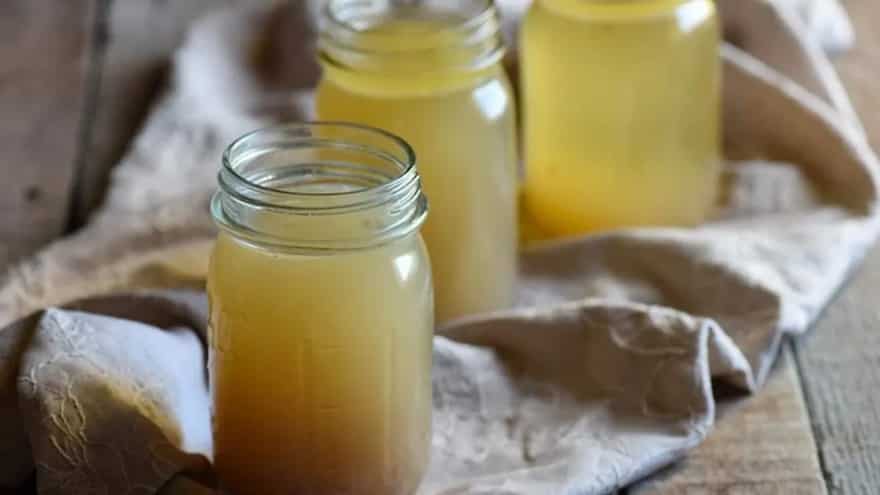 Fast forward to today, and bone broth is still popular for many of the same reasons. The nutrient-dense soup is one of the best sources of collagen, a protein that is essential for optimal intercellular connectivity. Consuming foods rich in collagen has been proven to boost skin and good health. The high percentage of collagen peptides in the soup is said to help heal the gut membrane. Bodybuilders and martial artists that fast to cut weight have long credited bone broth for optimizing gut function during prolonged fasts. Athletes also use the liquid to break fasts since it is rich in an amino acid called glycine, which boosts the body’s serotonin levels without affecting dopamine, enhancing mood sans the dopamine crash. Because the technicalities of the majority of these alleged benefits are based on anecdotal evidence rather than peer-reviewed studies, their real-world efficacy spans a wide range. That said, the liquid still has numerous health benefits, most of them nutritional. There are very few foods that can match the soups’ protein to calorie ratio; a 250-ml serving is only 63 kcal while being packed with almost ten grams of high-quality protein. Bone broth is also incredibly easy and inexpensive to prepare. The only ingredients you will need are animal bones, water, and seasonings to taste. Read on for a simple bone broth recipe that can be prepared with just about any type of bone and/or cartilage.