Even though Labrador Retrievers are still the United States’ number 1 dog for over three decades, the active and intelligent poodle has made a strong return to the top 10 since 1997. The American Kennel Club’s rankings of popular dog breeds just came out with some surprising results. While dog breeding is still a debatable topic, purebreds and mixes are still increasing in popularity.

The American Kennel Club is a nonprofit organization recognized for its knowledge of dogs breeds, training and health. The AKC held its yearly rankings on the most popular breeds from last year’s list of almost 800,000 purebred puppies and dogs.

Labrador Retrievers are still America’s number one choice after 31 years, but there were some surprising results. Poodles have not been in the top ten for 25 years. Now, they have moved to 5th place.

Poodles of all sizes ruled as most popular dog for 22 years between 1960 and 1982, before decreasing in popularity. Now, they have regained a top spot for the first time in almost 25 years.

Poodles are intelligent dogs that were used throughout history to find fresh water.

They are very active and complex, plus they are good companions for people with allergies. Poodles can provide support for people in hospitals and work as guide dogs for people who cannot see. They can hunt and even compete in obedienceor other dog sports.

Poodles easily remember past behavior and can create high expectations for their owners.

Doodles are a popular mix of poodle and another dog breed. Examples of doodles include: golden doodles, a mixture of golden retriever and poodle; Labradoodles, a blend of Labrador retrievers and poodles; and even maltipoos, a combination of Maltese and poodle.

The AKC governs many dog ​​shows in the United States. It has not yet agreed that the doodle is a breed. 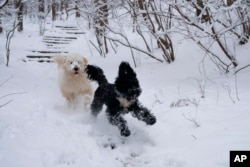 Brandi Hunter is a spokesperson for the AKC. She says that doodle lovers are trying to find a way to have the animal recognized as a breed.

The main requirement for recognition is creating a list of traits for the breed that become required.

“The predictability is one of the things that draws people to purebred dogs,” Hunter explains.

Although the list of popular dogs does not change much from one year to the next, over time, big changes can happen. Since 2000, eight breeds have slowly moved into the top 25, such as the Great Dane and the Pembroke Welsh corgi.

Some dog breeds have quickly entered the top 25 like French bulldogs and the cane corso, which was not part of the AKC until 2010.

Cane corsos are very large dogs. Their ancestors are from the Italian countryside, and they were used as farm defenders that could pull small carts and also hunt. This interesting breed also competes in competitions and can be seen on TV shows and music videos. 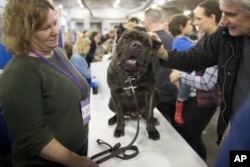 FILE – Ledous, a cane corso, gets his ear scratched while being shown during the meet the breeds companion event at the Westminster Kennel Club Dog Show, in New York, Feb. 10, 2018.

Voluntary purebred registrations have increased 45 percent in the last 10 years. Many animals-rights activists say that there are some problems with breeders. Activists claim the breeders are more concerned about the appearance rather than the health of the dogs.

They say creating purebreds supports puppy mills and increases the amount of dogs left in shelters.

The AKC has defended itself and their partner breed clubs by saying they are concerned about dog health and breeding practices. The AKC says that correct breeding has a purpose. It creates dogs with acceptable traits, like size and ability to smell. These traits help humans and fit different owner lifestyles.

Jennifer Peltz reports this story for The Associated Press. Faith Pirlo adapted it for Learning English.

Words in This Story

purebred – adj. born from the same type as their parents

allergies – n. the body’s reaction to something that it is sensitive to

obedience – n. Observation of an order, request, or law

foot – v. to show too much attention

puppy mills – n. places where small dogs are bred without care for the animals and with bad living conditions

What do you think about the top 10 most popular dog breeds? We want to hear from you. Write to us in the Comments Section.