At the park near Duboce Triangle in San Francisco, 5 pm is canine happy hour. About 40 dogs run around, chasing balls and wrestling, as their owners coo and ’90s hip-hop bumps out of a portable speaker.

A Chihuahua mix named Honey lounges on a bench wearing a blue tutu and a string of pearls. Her owner, Diana McAllister, feeds her home-made treats from a blue Ziploc bag, then pops one into her own mouth.

And after spending two years at home through the pandemic, it’s clear that for a lot of these owners, their dogs are their children.

“I always say, dogs are people, so I love him,” says Yves Dudley, looking on as her 9-month-old collie-schnauzer mix plays in the grass.

Across the country, 23 million families adopted a new pet in the first year of the pandemic. Others, working from home, started paying more attention to their existing pets’ daily routines, noticing symptoms like vomiting or coughing. The resulting spike in pet health concerns has been straining a corner of the medical world that doesn’t get as much attention as doctors and nurses: veterinarians.

The overwork and short staffing of the pandemic has affected veterinarians as much as it has other doctors and nurses, and dealing with the constant moral dilemmas and emotional output is driving many to burn out. At the Society for the Prevention of Cruelty to Animals’ veterinary hospital in San Francisco, so many vets and technicians have left that the clinic has had to cut back its hours, says veterinarian Kathy Gervais.

Dog owners say they’ve had to wait months for vet appointments or drive to vets far from home to get care.

“Getting your dog in to see the vet is as competitive as trying to buy Coachella tickets online,” says Laura Vittet, whose golden retriever, Gertrude, is 1 1/2 years old. “You have to wait by the phone, you have to be ready to refresh your browser. It’s a very intense experience.”

Diana McAllister takes her dog, Honey, to a park in San Francisco, where some owners have had to wait months to get veterinarian appointments.

Gervais says she works 12-hour days, constantly zigzagging from new puppies to dying cats. And the whole time, she takes care of the humans, too.

“To these people, and especially in these times, this is their love,” she says, thinking especially of the owners who dress and coif and cook for their dogs. “This is their being, this is what they live for. And for vets, it’s very hard for us to draw the line.”

Even before the pandemic, vets’ mental health was suffering from empathy overload and compassion fatigue. They carry the weight of having to euthanize animals that could be saved, but their owners can’t afford the care — Gervais says her practice has to euthanize about five animals every day. Some upset owners become downright abusive, consulting vets or later bullying them online. 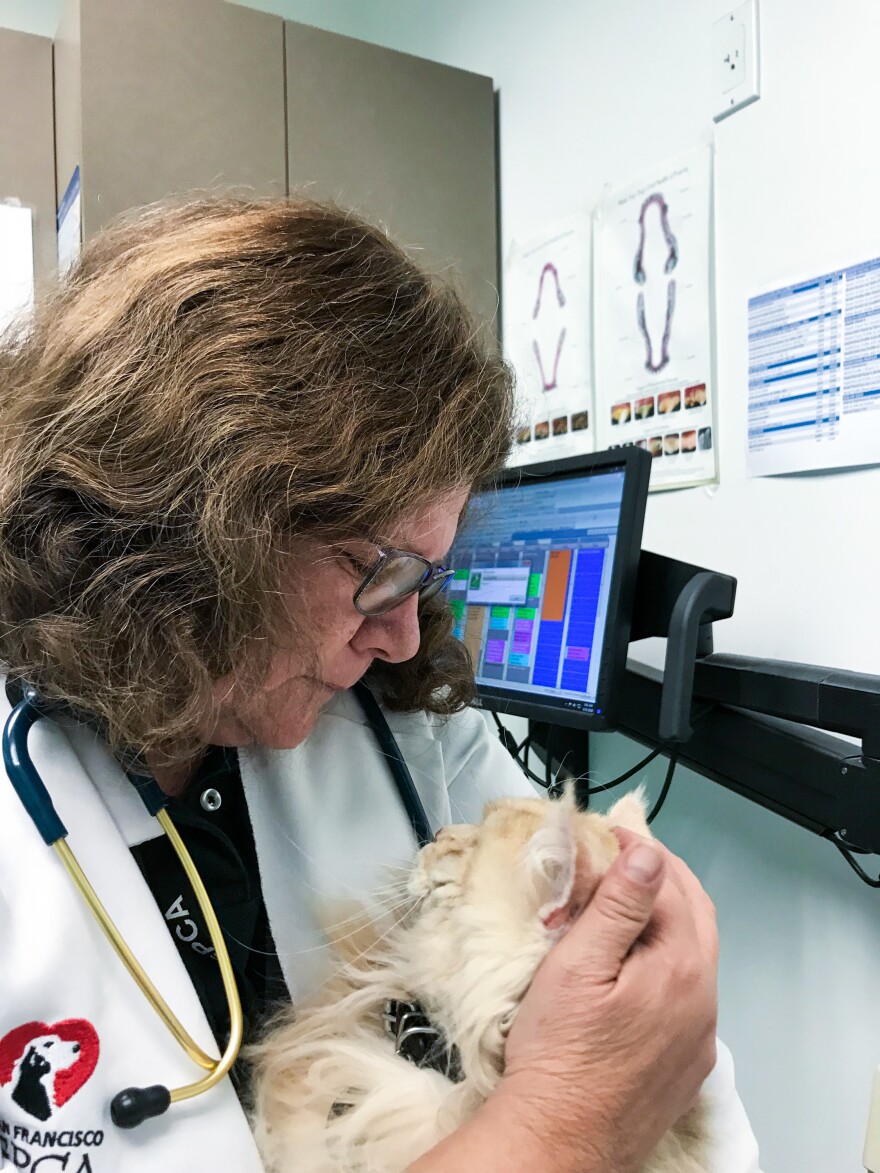 “I dare you to try to talk to a veterinarian who’s been in practice more than five years who doesn’t know somebody who has committed suicide,” says Gervais. “I, unfortunately, can count on more than 10 fingers: classmates, colleagues, people I’ve dated.”

One out of 6 veterinarians has considered suicide, according to studies from the Centers for Disease Control and Prevention. Female vets are 2.4 times more likely to die by suicide than the general population, and 80% of vets are women. Male vets have a 1.6% elevated risk. The most common means is euthanasia drugs.

In the months early of the pandemic, Gervais could see things getting worse. She helped organize the Veterinary Mental Health Initiative, which offers free support groups and one-on-one help to vets across the country.

All of the facilitators have doctorate-level training, says founder and director Katie Lawlor, also a psychologist, and they’re all familiar with the issues troubling vets.

“Burnout, compassion fatigue, managing panic attacks, how to communicate with both supervisors, colleagues and clients when you’re under extreme deadlines or very intense stress,” she says. “And, the loss of their own companion animals.”

The initiative helped Razyeeh Mazaheri work through the anxiety she was feeling every day caring for animals at a clinic outside Chicago last year. The clinic was regularly double or triple booked. As a new vet — Mazaheri graduated from veterinary school last spring — juggling so many cases was terrifying.

Through the support groups, Mazaheri was able to see that others shared her concerns and she learned tools for managing them. The initiative, housed under the nonprofit Shanti Project, has groups specifically for emergency vets, vet technicians, recent grads like Mazaheri, and for longtime vets like Kathy Gervais who have more than 20 or 30 years of experience.

“I’ve had people look at me sometimes when they’ve seen me really tired, going, ‘Kathy, walk away,'” she says.