The first veterinary school in Texas in more than a century officially opened its doors to students on Monday.

When the clock hits 8 a.m., the seats in the Happy State Bank Auditorium of the new
Texas Tech University School of Veterinary Medicine Amarillo Campus building were filled with the next generation of veterinarians. Students from across
rural and regional communities of Texas and Eastern New Mexico came together for the
first day of class. First up: DVM 5380 – Parasitology.

The future of veterinary medical education has arrived. 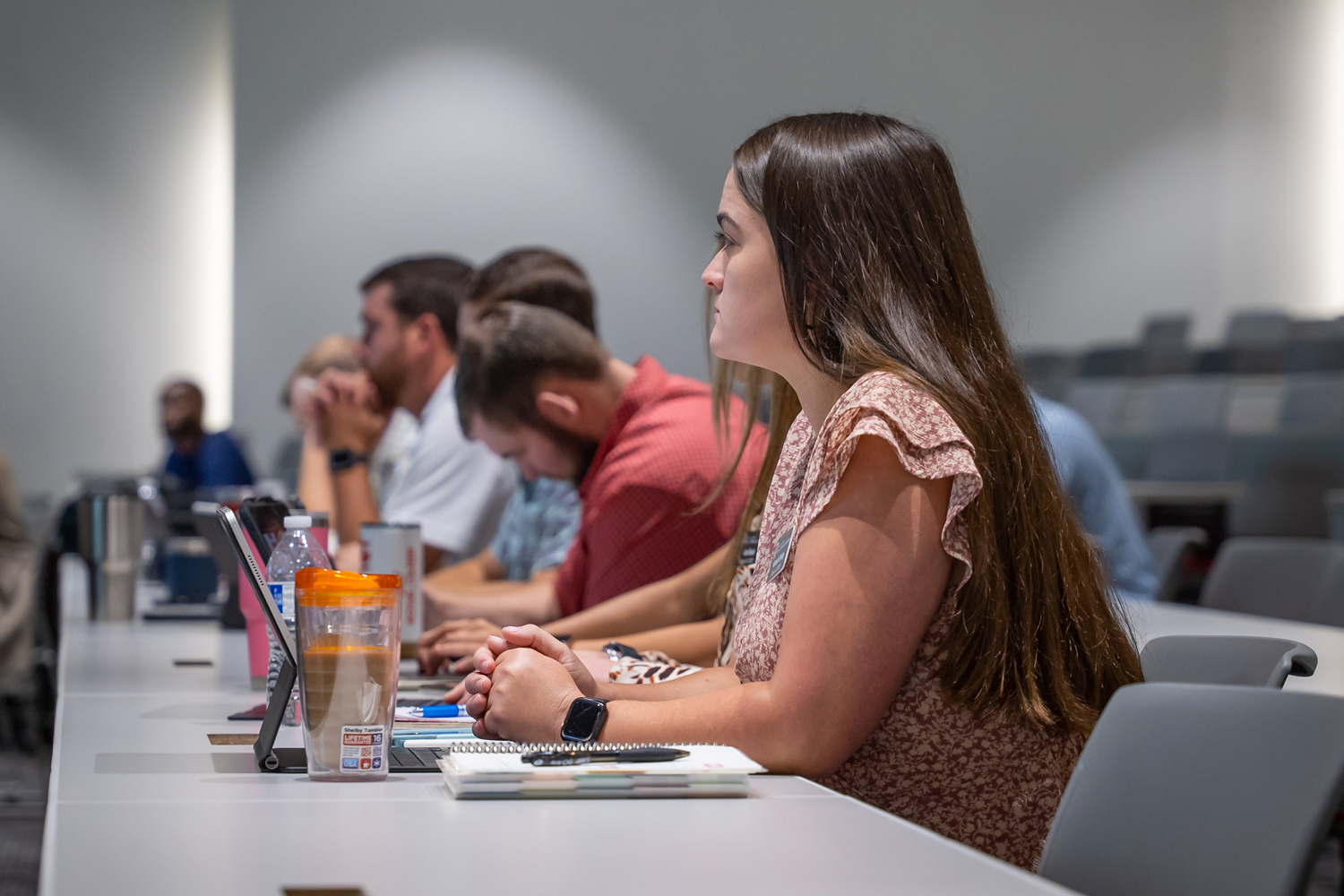 “Day one is in the books!” Dean Guy Loneragan said. “After all these years of dreaming and believing, it is so wonderful to be
a part of a fantastic team that gets to see firsthand the reality of what it has become.
We are so lucky to have an outstanding group of students – a group of partners – to
kick off this academic program.”

For the 64 students of the first class, it’s more than just the beginning of pursuing
their dream to become veterinarians. It is the realization they are embarking on a
historical undertaking. They will forever be known as the first class of students
to walk through the halls of the state-of-the-art Amarillo Campus, to experience hands-on
learning with large animals at the purpose-built Mariposa Station and, eventually,
participate in experiential learning with one of the numerous veterinary practices
across the state that have partnered with the School of Veterinary Medicine.

The historical significance of the moment is not lost on these students.

“There is a lot riding on this first class at the Texas Tech School of Veterinary
Medicine, and I know the faculty will do everything they can to push us to be successful
even beyond our graduation date,” said Jadeyn Arthur, a Ralls native who earned her
bachelor’s degree in animal science from West Texas A&M University.

“There is a sense of pride in being able to say, ‘I’m going to be in the inaugural
class and be the first step in building a legacy that will last beyond my lifetime.’
In four years, when we walk that stage and head our separate ways, we will always
be connected because we are the first class.” 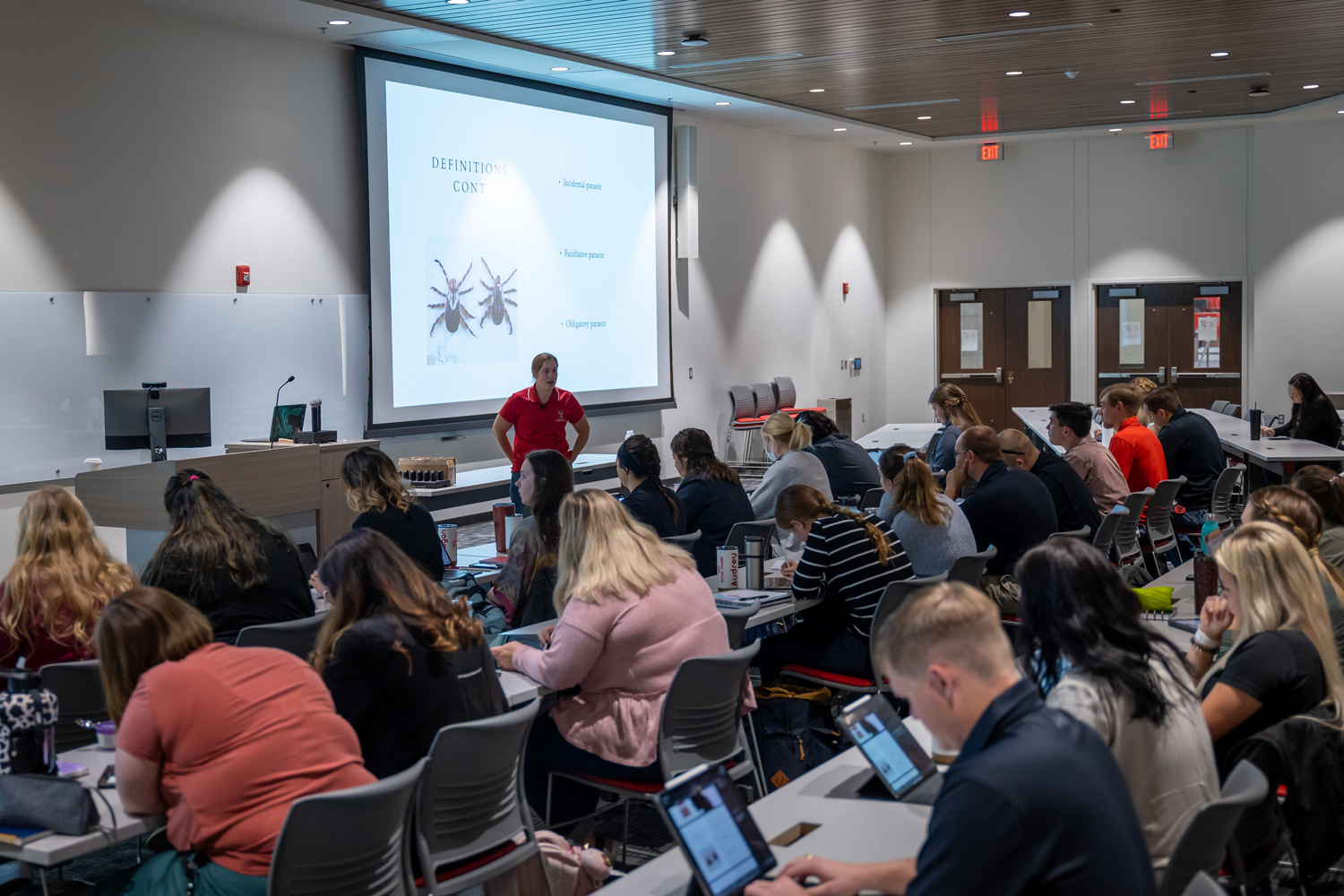 The goal is to produce veterinarians who will, upon graduation, serve rural and regional
areas, where the need for all types of veterinary service is immense and growing.
Jovani Armendariz, a first-year veterinary student from House, New Mexico, a rural
town between Clovis and Santa Rosa, grew up on sheep and cattle ranches. Armendariz
said the school’s orientation toward training and producing rural veterinarians was
a factor in his decision to apply.

“I grew up in and have lived and worked in rural communities most of my life,” said
Armendariz, who earned his bachelor’s degree in animal science from New Mexico State
University in 2010 and served five years in the U.S. Army as a medic. “I’m familiar
with the needs of rural communities, many of which are at least an hour’s drive from
the nearest veterinary services. My goal is to provide these services to my community,
and I am happy to be part of a program that has an emphasis on rural service.”

According to Texas Tech University, of the 64 first-year students enrolled, almost 70% are from hometowns considered
rural or sparsely populated – but not all. 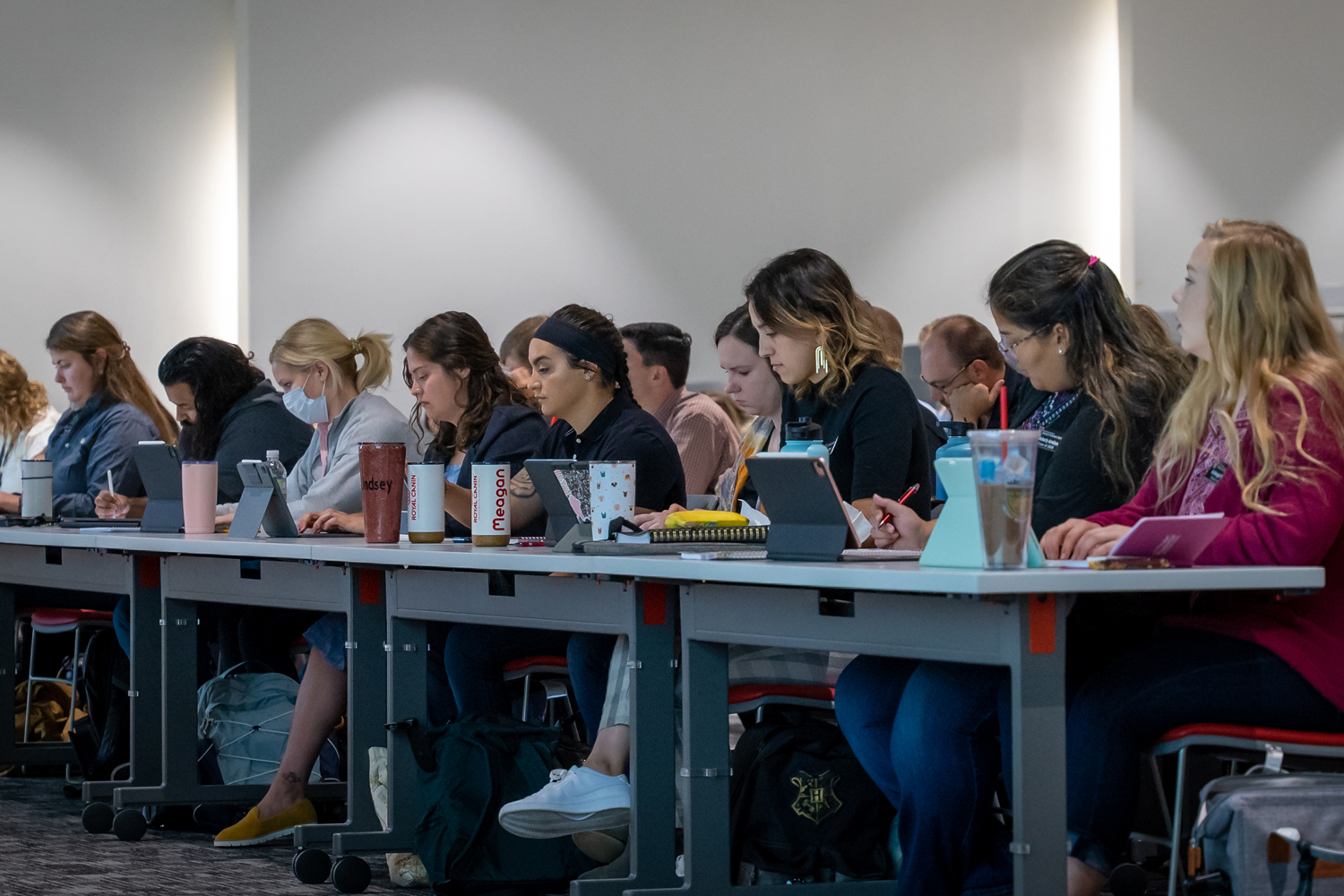 Sarah Cate Hyde, a native of Fort Worth, earned her bachelor’s degree in pre-med chemical
engineering from the University of Oklahoma in 2017. She always had a desire to pursue
a career in veterinary medicine but chose what she called the “responsible” career
path after graduation and worked in the oil and gas industry for two years.

Eventually, though, she decided to pursue a dream that began in her youth and was
influenced by riding horses and competing in rodeos.

“Working with horses brings me a peace and fulfillment unlike anything else I’ve ever
felt in my life,” Hyde said. “When I found out Texas Tech’s program was designated
toward Texas rural and regional communities with an elevated emphasis on large-animal
medicine, I knew it was the perfect school for me. My passion is in equine medicine,
and I aspire to practice mixed large-animal medicine. I knew I wanted to stay in Texas,
which was another big win for me with this program.”

About one-third of the inaugural classmates self-identify as first-generation veterinary
students. Approximately 25% of the cohort are members of an underrepresented ethnic
or racial group, and 70% are female.

“After one tour of the facilities and a few short phone calls with the faculty, I
knew the Texas Tech School of Veterinary Medicine was the place for me,” Arthur said.
“I just couldn’t help but feel at home when I walked through those doors, even if
the building wasn’t finished. What really pulled me in was that the faculty would
say, ‘This is where you are going to do surgeries,’ or, ‘This is where you are going
to be completing research.’ They don’t just want us to watch and learn, they want
their students to do and learn. I have no doubt my professors will push me to be successful
and give me the tools to do so.” 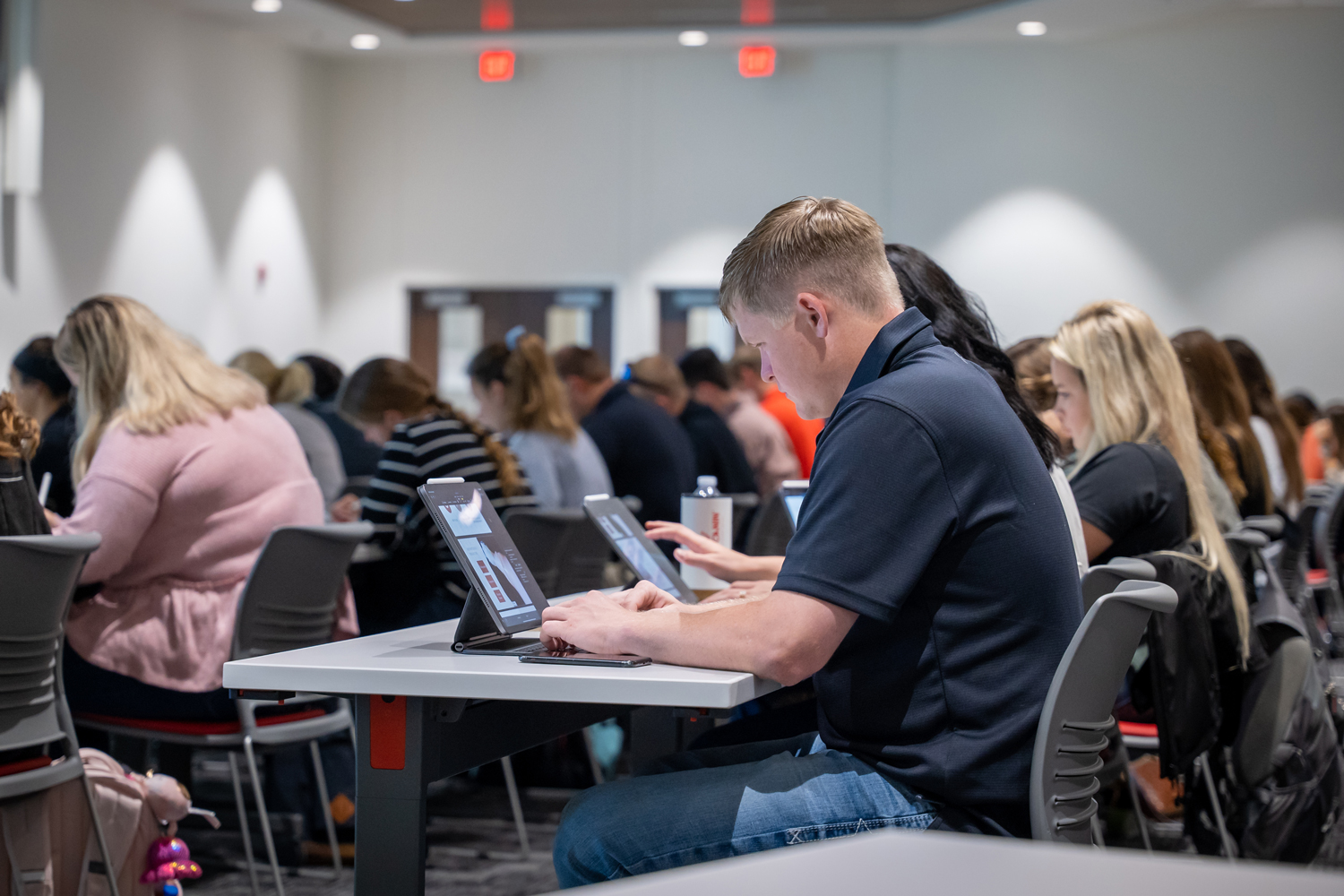 Considering the high cost of a veterinary education, the fact the curriculum for the
Texas Tech School of Veterinary Medicine promises to produce a practice-ready veterinarian
in just four years is extremely attractive to students.

According to a feasibility study by Texas Tech in 2018, the average debt incurred
by Texas veterinary school graduates from an out-of-state program was more than 20%
more than the debt of in-state students. So, as Texas Tech began to pursue building
a veterinary school, it was imperative to recruit potential students likely to return
to rural and regional practices and provide them with a cost-effective education so
they wouldn’t be saddled with crippling student debt.

With a curriculum that eliminates the need for a teaching hospital, instead having
fourth-year students learn directly from veterinary practices throughout the state,
students will incur less cost and will be in practice in four years instead of five
as with most veterinary schools.

“The model of the curriculum at Texas Tech is really exciting and was another huge
selling point for me,” Hyde said. “I love that they are taking a new approach to the
veterinary education model. As a second-career student, I can appreciate how important
it is to understand the applications of what is being learned in the classroom, and
I know this model will help graduate successful, confident doctors.” 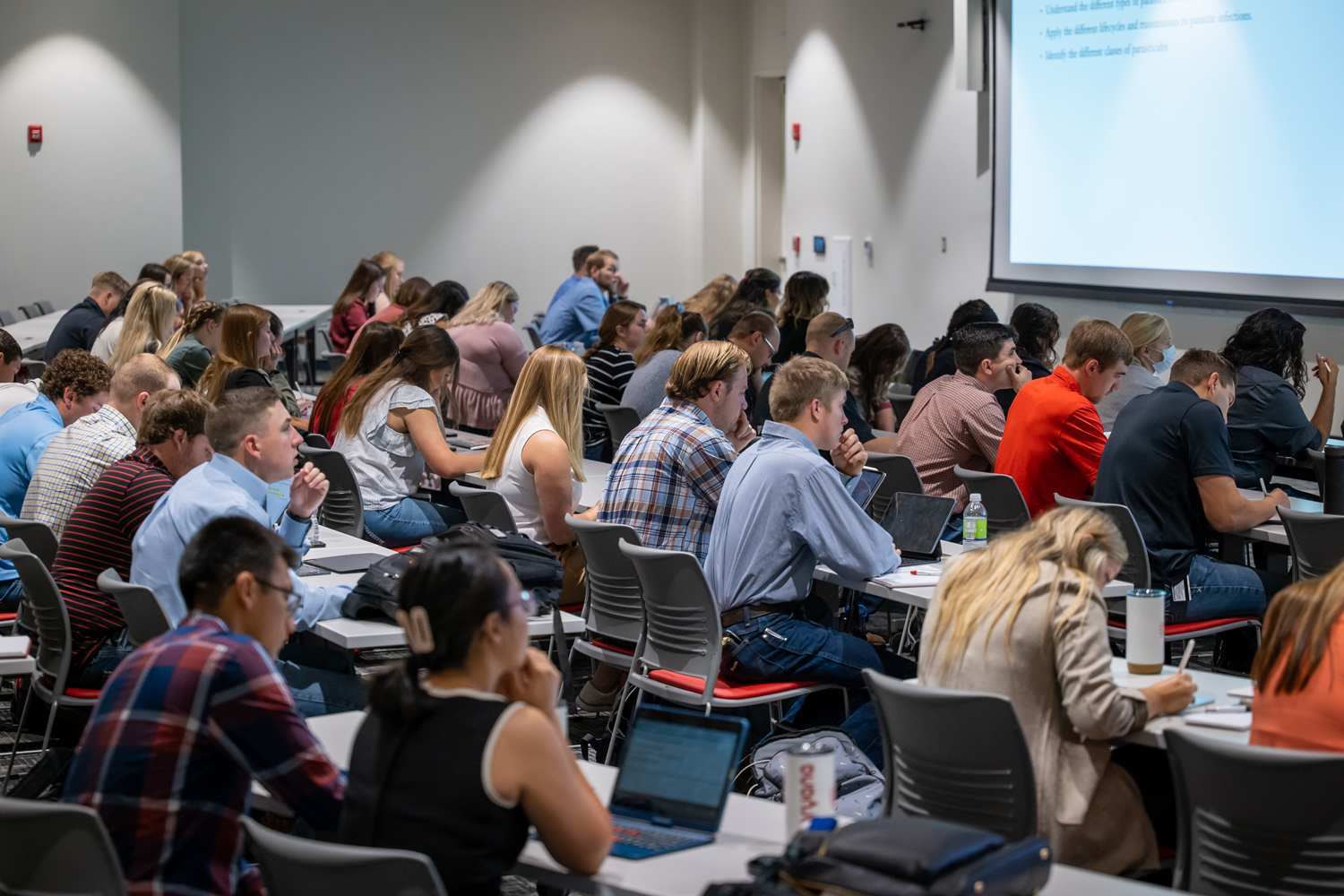 Armendariz added that locating the Texas Tech School of Veterinary Medicine in Amarillo
made it even more attractive as the place to earn his degree and hastened his pursuit
of it.

“When I learned about Texas Tech’s new School of Veterinary Medicine, my interest
in a career in veterinary medicine was renewed,” Armendariz said. “By then, the thought
of uprooting our family of four to attend vet school in Colorado or Oklahoma was not
really an option. However, Amarillo was very much an option as it is only two hours
away from home and our existing farm and sheep and cattle operation.”

History in the making

Four years from now, the Texas Tech School of Veterinary Medicine will mark another
milestone – graduating its first class. When the students are in their final semester,
the school is eligible to apply for the final step in the accreditation process.

But beyond that, it will show that not only was the vision of so many to pursue this
initiative right and justified, but that Texas Tech, once again, has become a leader
in educational opportunity and access to affordable, world-class education. This time,
it’s all about solving the veterinary education and veterinary services needs for
underserved communities of rural and regional Texas.

“I would have been very happy to have been accepted to any veterinary program, but
to be part of the inaugural class of a new program like Texas Tech School of Veterinary
Medicine is an honor,” Armendariz said. “It is exciting to know we will be attending
classes in brand new facilities with the newest available technology that was designed
specifically to meet the training needs of rural veterinary medicine. I also understand
that every new program comes with challenges, and as the school continues to develop
for future classes, our class will become the foundation for future classes to build
on. I believe that is a big responsibility for both the faculty and staff as well
as the students.”