The inland movement of Ida was north rather than northwest. This could save Baton Rouge from having to deal with the worst that Ida has to offer. Metro Baton Rouge will continue to struggle with strong winds and heavy rainfall. But the latest forecast reflects the heaviest rain and winds that could stay closer to Corridors I-55 and I-59.

The Ascension Parish sheriff’s office reported the first death related to Hurricane Ida. Officials said MPs received reports around 8:30 p.m. of a person who may have been injured from a fallen tree in a house off LA 621 in Prairieville. MPs confirmed that the victim died from the incident. The Louisiana Department of Health reported that the victim was a 60-year-old man. The victim’s name was not published.

The strongest wind from Ida will blow on the east side of the circulation. Gusty winds will remain on the west side, but the east side will likely have sustained hurricane strength winds. That means eastern portions of our observation area, including portions of the Livingston, St. Helena, East Feliciana, Tangipahoa, St. Tammany, and Washington communities, and portions of Amite, Pike, and Walthall counties, could still feel the brunt of Ida. Hurricane strength sustained winds on the order of 75 to 85 miles per hour with occasional gusts of up to 100 miles per hour. Winds for areas along and west of the Baton Rouge Metro are likely to remain of tropical storm strength with sustained winds of 40-55 mph and isolated gusts of 65 mph. The worst wind in these areas will occur late tonight at dawn on Monday. The winds will begin to drop below the strength of a tropical storm across the board by noon on Monday. 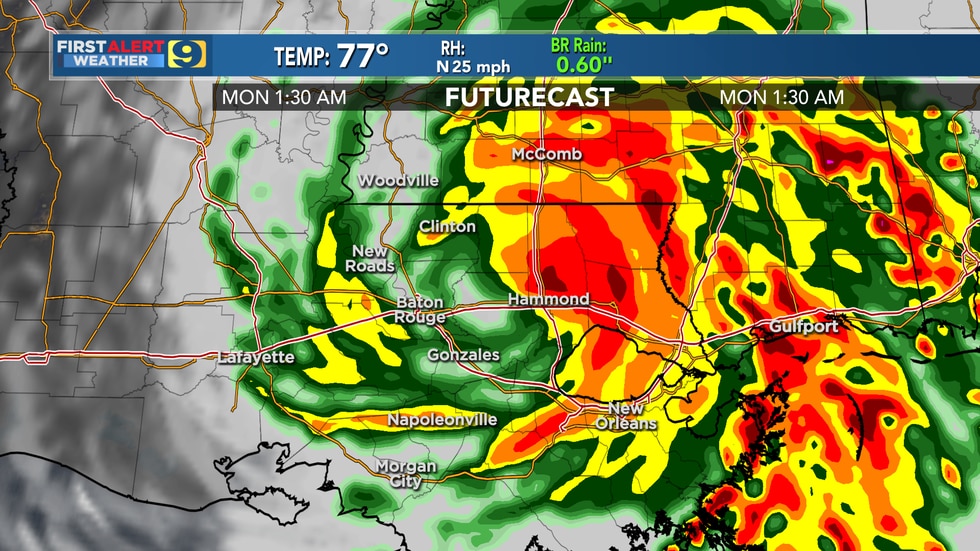 Persistent heavy rain bands will continue to drop rain on the east and north sides of Ida’s circulation. Precipitation estimates for the region have decreased slightly through Tuesday afternoon based on the latest forecast from the Weather Prediction Center. The forecast is for average totals of 10-15 “for areas along Corridors I-55 and I-59. Near the Baton Rouge metro, the rain total averages 5-10 ″ through Tuesday afternoon, with the total increasing from west to east. As you continue west towards the False River and Acadian, rainfall estimates drop to 1-3 “. Rain could continue to be problematic for salvage efforts on Monday and Tuesday because of the feeder belts on the extreme south side of the storm circulation. These feeder bands tend to move over the same area for extended periods of time, resulting in localized bullseyes with significant amounts of rain. The danger of heavy rain ends late Tuesday. 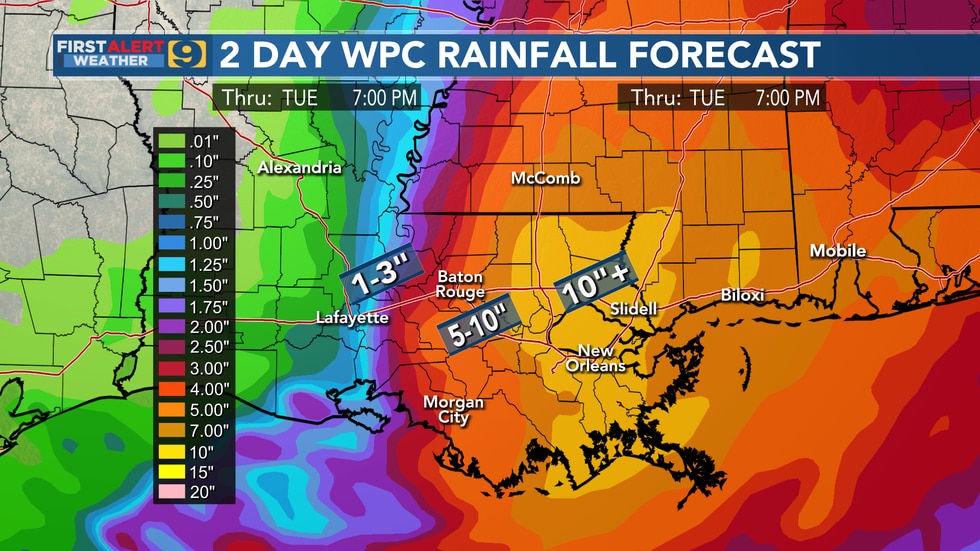 Speaking of area rivers, the Ida track shift means positive news for the area rivers. River basins are not considered to be a significant accumulation of rain. This is likely to reduce the threat to moderate flooding, with the exception of the rivers along the lower reaches of these area rivers, mainly due to the rise in tidal lakes. The upper reaches of the Comite and Amite Rivers are still likely to turn into minor floods. The Tickfaw River and Tangipahoa River stay close enough to the heavy rain threat that these predictions need to be closely monitored. We expect a new release of forecast data from the Lower Mississippi River Forecast Center on Monday morning.

A tornado surveillance will remain in effect for areas along and east of the I-55 corridor until 6 a.m. Monday. A tornado clock offers favorable conditions for the production of tornadoes. The serious threat to the Baton Rouge Metro remains low.

The heaviest rain and winds will likely occur tonight through the Monday before sunrise. Make sure you are notified if severe weather warnings are issued for your location. We still expect problems with power outages tonight. Make sure you operate generators properly and safely.

Flood Watch continues nationwide through Tuesday morning, with a Tornado Watch Box east of Hammond for tonight. The expected storm surge on the coast is more than 10-15 feet as we have already seen the Grand Isle area almost under water.

The rain totals are still on the high end east of Baton Rouge, between 10-15 inches, while we should see four to six inches in the downtown area. Gusts of wind could reach as high as 95 mph in Baton Rouge overnight until early Monday morning, however the sustained winds will be much lower, closer to 60 mph. Stay tuned to WAFB for more updates. 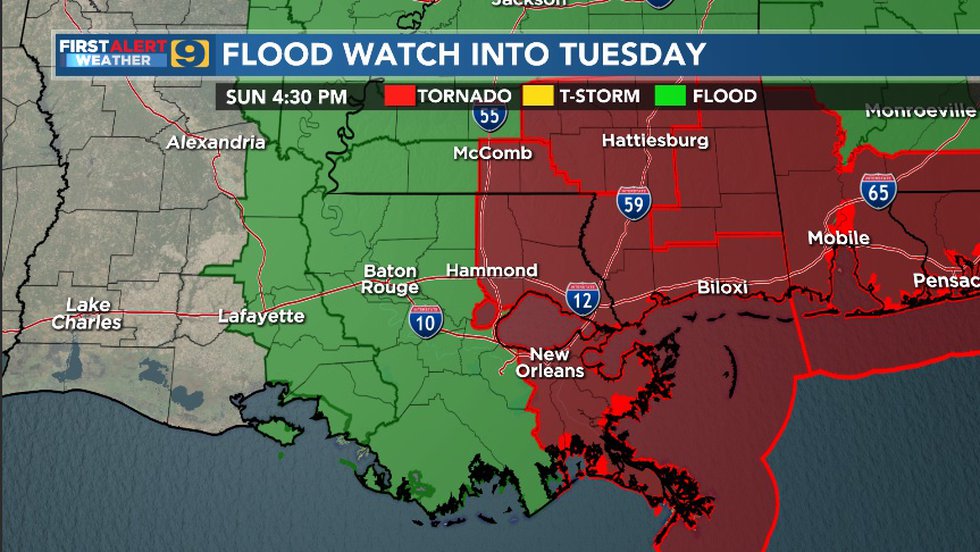 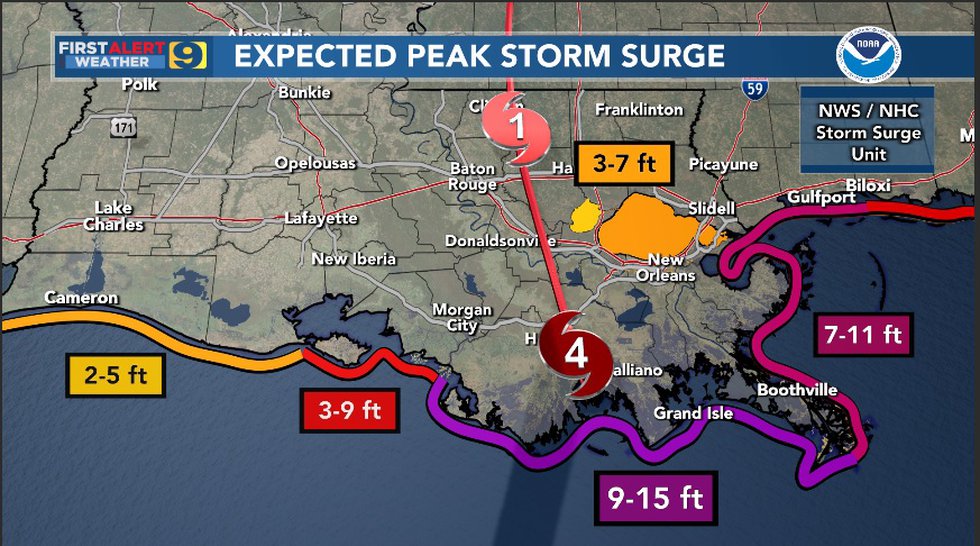 Stay with WAFB and the First Alert Storm Team for ongoing updates during the duration of this weather event.