I knew I wanted to be an animal trainer when I was 7, so I started training the family dog ​​when I was 9 and I was naturally gifted with it, so I won awards. I’ve also always tried to save injured native wildlife and bring them back to health. I was a social outcast, didn’t really fit into my small town, and you have a lot more time to yourself when you don’t have a lot of friends. But that enabled me to be comfortable in my own skin, to learn, to entertain myself, and to be comfortable with animals.

I got my first rat when I was 16 and I remember reading about how highly intelligent they are. Then I moved to Chicago when I was 23 and really found my niche and my people. I worked in a pet store and had this group of rats that I trained. I even had small business cards printed that said, “The Rat Company: Trained Acro-Rats for All Occasions”. The Acro Rats show became a cult hit. I was hugged for something I had been rejected for in the first half of my life.

I kept telling people that someday someone would come through the door of the pet store to have a rat for a movie. Everyone thought I was crazy. Well one day someone who was working on an independent movie came to the pet store and needed a rat.

I quit my job at the pet store for this unpaid movie gig, and a TV station showed up to film me with the rats. They showed how I had taught them to answer phone calls and do tricks. That TV show then went all over the country and a guy in Italy saw it and asked me to fly to Italy and do a show with the rats on Christmas Eve. That was when everything was snowing and I was appearing on all sorts of different TV shows. I was the “rat lady” before I became the “cat lady”, it really is a “rat to fortune” story. But the rats were small, so I could only perform in smaller venues like nightclubs, and I realized that I couldn’t live like that. So I expanded and ran wildlife education programs to make ends meet.

In the early 2000s, I realized that I had not fulfilled my dream of training animals for film and television. Cats are the second most popular pet in the United States, but they are known to be a nightmare to work with. I had tried to incorporate cats into my live show with the rats and it was a disaster. But then a cat named Tuna came into my life and she was extraordinary. So I decided to teach her to do all kinds of tricks and I started taking her to pet shows. She rang the doorbell and I handed out cards and Tuna started photo shoots and filming.

I use clicker training, it’s about positive reinforcement. Cats do not respond very well to any form of punishment. In clicker training, you click on the clicker at the same time as you deliver a treat. The sound of the click means they have just done something that will earn them a reward. You can also instruct them to perform certain actions with a target stick. It’s a way of communicating the behavior you want the cat to behave.

Three of the Rock Cats perform on stage.
Samantha Martin 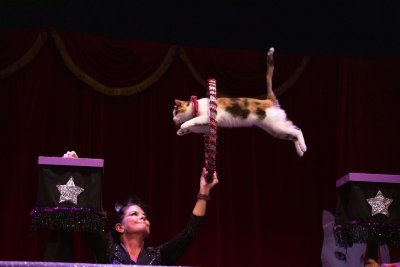 In 2004 I put together the cat band. I was touring with my wildlife show in a mobile home and had trained tuna and several other cats put together a cat band that played the piano, drums, and guitar. They actually play the instruments. Their claws are natural pickers for them
Guitar and they hit the keys on the keyboard. The drums are set up to hit one side of the sticks so that they go up and down on the drums.

I put the gang of cats on the camper’s table and when we stopped somewhere I would open the door and ask passers-by if they wanted to see something cool. It went down really well and when I got back from that tour I decided to put an entire show together with the cats.

I still ran a business selling cats for film and television, but I decided to do what I had done with the rats all those years ago. The show has developed a life of its own. They started in art galleries and people came in droves. There are so many cat lovers out there. 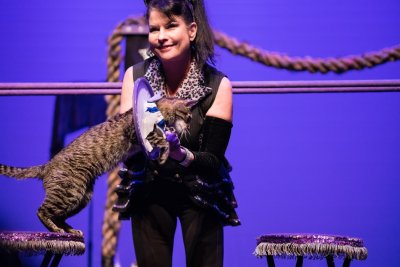 Since the cats are my pets – they are all ex-orphans, rescues, and strays – I live with them and raise many of them when they are babies. So I watch what they do alone; Do you spend a lot of time high up or do you prefer to be on the ground? Do they often use their paws or their nose instead? From there I come with tricks.

At such a show you have to be able to laugh at yourself and be ashamed when the cats don’t do anything. I had to come up with lines to fill the air. We have already traveled all over America and also to Canada. We’re doing very well in Texas and people love us in places like New Orleans, Portland, San Francisco, and San Diego.

We have 600 seats, but because the cats are small, I like the intimate venues; those between 200-500 places. In 2009 the mission changed a little as I started caring and have looked after over 300 cats and kittens to date. So the show is now about spreading the topic of rescue.

The show now begins with the first meeting of the new tuna. Unfortunately, the original tuna has passed away and now there are two new tunas that set an applause sign and ring a bell. Then I talk about the cats and do a little clicker training demonstration with a rescue cat. Next we do the part where cats who are still learning tricks perform, then the Amazing Acro-Cats perform to music that is sometimes amazing and sometimes a train wreck. But even if it’s a train wreck, people still say it’s the best show they’ve seen in their life. Then I talk about some of the cats, there is a competition between two cats and a chicken, and finally the cat band Rock Cats is playing. It’s a nine piece band that also has a cowbell, glockenspiel, cymbal and tambourine, saxophone, trumpet and clarinet, so now it’s really the Rock Cats and Jazz Cats.

We have a cat named Jax who knows all the tricks, but at some point she decided she just wanted to sit on a skull. It was Halloween and I bought a skull for the show and she really got into it. Sometimes she sat on the head, but then she decided that she really wanted to be in the audience. She roams the audience and works the crowd. Sometimes she sits on someone’s lap for 20 minutes and sometimes she comes back with bills in her collar. It’s really fun. At some point in the show I announce her and her trick and she keeps coming on stage because she doesn’t want to miss her curtain.

In 2019 I was on the road for about 9 months, it was a bit exhausting. I was diagnosed with cancer the year before, but survived and got out right away. Then I was betrayed and the pandemic struck, so it was one blow at a time. We hit the streets again after almost two years and recently completed a tour of the US east coast. We now have a 45 foot tour bus and the back third of the bus is cat paradise. But there is also space for people to sleep and a refrigerator, shower and bathroom.

I wish I had celebrity fans, but I’ve just been to a lot of TV shows and appeared on the Netflix TV show Cat People. I was on the Late Show with Stephen Colbert, but the cats bombed on that show; only three appeared. Stephen Colbert was a good sport, but I was hoping it would be great and it wasn’t. The cats freeze up when we do these talk shows, but they’re fine in a live theater with hundreds of people in the audience!

I had to retire a few cats and I still have some 16 year olds on the show. The future will be full of tears and heartache for I will lose my family members. I’ve raised some of these cats since they were two days old and chances are I’ll be taking in more.

When I die, I will have such a large following that I will know these cats and anyone else I take in will be looked after. Until then, I’ll keep going because I can make a difference; I save the lives of animals.

Samantha Martin is the founder and trainer of The Amazing Acro Cats and the Rock Cats. She also helps with the rescue, care, and adoption of cats with Rock Rescue Cats. Learn more about both at rockcatsrescue.org. Follow them here on YouTube.

All views expressed in this article are the author’s own views.