HYDE PARK — After several years of managing a dog-walking operation out of their home, two South Side residents have moved the thriving business into a Hyde Park store and expanded it to include a “boutique” dog day care service and play park.

Hyde Bark had its soft opening in the historical Deco Arts Building, 5508 S. Lake Park Ave., in early January. Owners LeAnna Quartuccio and Brandon Elkins, who are married and live in North Kenwood, have been ramping up to full capacity in the weeks since.

Dog day care is $40 for a half day and $50 for a full day. All dogs visiting Hyde Bark’s day care for the first time, and all dogs who haven’t attended for three months or more, must complete a free trial session to gauge the dog’s ability to play with others.

Since the facility opened, dogs “are excited to come in; they’re happy to be here and happy to play with their friends,” Quartuccio said. “Because we’re so small, we basically have the same dogs all the time, so they know each other. They’re best friends.”

Quartuccio started Hyde Bark in fall 2015 after years of walking dogs for various companies on the North Side. Within six months, Hyde Bark was successful enough for Elkins to quit his corporate job and commit to the venture full-time.

“We went from one dog and just [Quartuccio] to four employees and me in six months,” Elkins said. “We stepped into this not having any idea what the hell we were doing, and we’ve learned on our feet the whole time.”

Hyde Bark, who now has 24 employees across its operations, walks about 150 dogs a day. Hyde Bark’s 3,000-square-foot play park can host up to 55 dogs per day; about helped that many were being cared for Tuesday.

Dog walkers’ pay starts at about $20 an hour, while full-time employees receive health benefits, Quartuccio said. The couple aims to pay “over the industry standard” and retain employees, as their skill sets are just as crucial to the business as the owners’, Elkins said.

Hyde Bark’s service boundaries cover Hyde Park, Woodlawn and Bronzeville, as the South Side “is such an overlooked area” for pet care and other services, Quartuccio said. While she’s focused for now on maxing out the new day care facility’s capacity, she’s open to expansion down the line.

“If more retail space opens up in the building, we are interested in expanding this location a little bit,” said Quartuccio, who lives with Elkins in North Kenwood. “But our ultimate goal would be to open a couple more of these smaller ones, like one in Woodlawn [and] one in Bronzeville, [to create] a little network.”

The business was approved for city grant funding in 2020 to restore a large garage at 4534 S. Cottage Grove Ave. in Grand Boulevard, but plans for the space fell through over zoning issues and the grant was never awarded, Quartuccio said.

“We finally just threw in the towel and decided to try a smaller, more personal approach” with the Hyde Park store, she said. The garage on Cottage Grove was “almost three times the size of this, so we decided to instead go with a boutique doggy day care.”

Quartuccio and Elkins put about $300,000 of their own money into renovating the Hyde Park space, which they rent inside the historical Deco Arts Building.

They remodeled a former insurance office and portions of Maravillas, the neighboring Mexican restaurant which downsized, Elkins said.

“It’s always been us just going out and taking care of animals — we go to people,” she said. “It’s different to have them come to our space and have something professional for them to come into.” 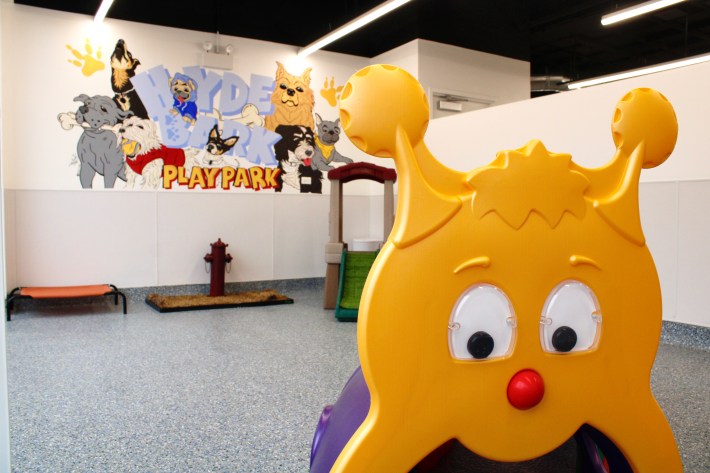 Credit: Maxwell Evans/Block Club ChicagoToys and equipment rest in an unused Hyde Bark play area Tuesday, with an A’Keem Muhammad mural in the background. The facility’s long run for dogs includes another mural by Arch Budzar.

Click here to support Block Club with a tax-deductible donation.

Thanks for subscribing to Block Club Chicago, an independent, 501(c)(3), journalist-run newsroom. Every dime we make funds reporting from Chicago’s neighborhoods. Click here to support Block Club with a tax-deductible donation.