Staff at the Tweed Regional Museum in Murwillumbah must be suckers for punishment.

They have gone above the call of duty for their latest exhibition, allowing leeches to feed on their hands and arms for a whole day.

“Myself and the rest of the staff have put ourselves on the platter,” museum director Molly Green said.

“We have been feeding our new pets.”

But Ms Green said it was all in a day’s work – she and her colleagues rolled up their sleeves to receive a style of health care from a bygone era.

The leeches have been brought into the museum as part of the Cure All exhibition, which looks at the history of health and medicine in the Tweed.

Museum curator Erica Taylor said the exhibition was not for the faint-hearted, but aimed to make people “appreciate modern health care”.

“Some of it is quite gruesome,” she said.

As part of the exhibition, the oldest items — blood-sucking parasites — are living in a special leech tank.

Leeches have been used for thousands of years in the medical industry to extract blood and are still used today in the plastic surgery industry.

The team at the museum spent the day “feeding” the animals.

“They’re quite intimidating when they’re on your arm for breakfast,” Ms Green said.

“We’re actually, excuse the pun, quite attached to the leeches now.” The leeches were given to the museum by a local medical supplier.(ABC Gold Coast: Cathy Border)

The creatures, which were given to the museum by a medical supplier, are different from wild leeches.

“We didn’t go fishing in the riverbeds around Murwillumbah to find them,” Ms Green said.

“While you might have found one in your sock on a hike, these are big, beautiful leeches.

“At first they turned our stomachs quite a little bit, but now we’re quite fond of them.”

‘Have a Bex and a lie down’

As well as the leeches, more than 200 historic items have been donated to the museum by chemists and pharmacists from in the area.

The Whittle family, which was made up of five generations of pharmacists, played a major role.

One of the displays included Bex tea, which was touted as a cure-all for common ailments. 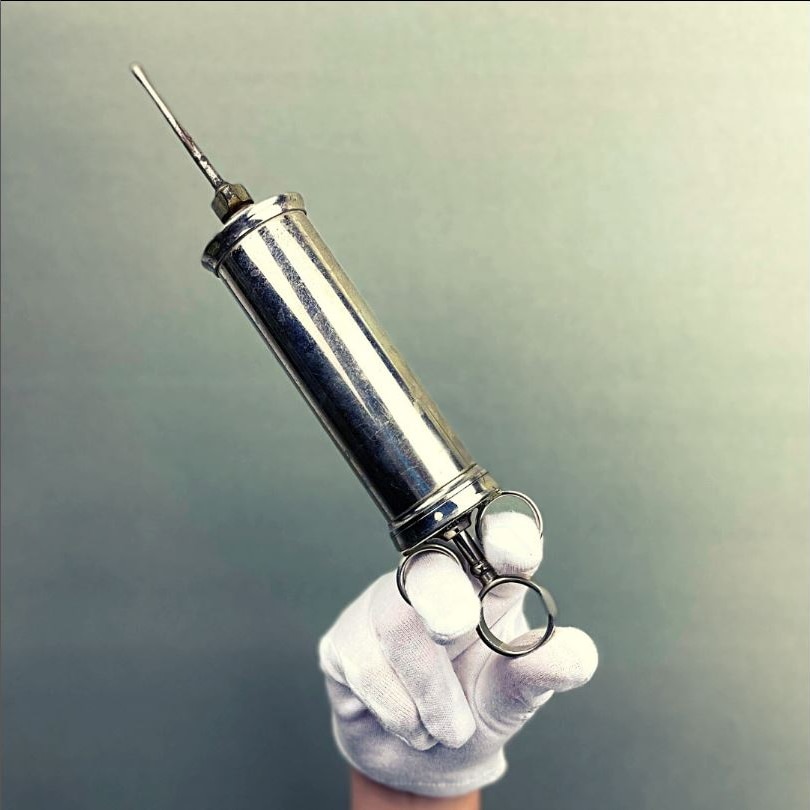 The exhibit is full of old medicines and machines, including this stainless steel syringe.(Supplied: Tweed Regional Museum)

“Many people would’ve had Bex in their life,” Ms Taylor said.

“[It] didn’t work and was highly addictive and unfortunately caused a lot of liver and kidney problems.”

Other surprises in the collection include opiates and morphine, which led Ms Taylor down a research rabbit hole.

“They actually, at one stage, tried to grow opium [in the Tweed Shire] commercially, but the weather was too wet,” she said.

“We used to put opiates in cough medication for children and toothache medication.

“Then of course doctors realized it was very addictive and stopped overprescribing it, and that’s when it became illegal.”

From quirky and quack

Ms Taylor said the museum had a special license to house the medications.

Other “gizmos and gadgets” being displayed include a violet ray machine, otherwise known as an electro-therapeutic machine, from the 1950s.

“These were quack medicines – they were advertised to cure everything from cancer to baldness.” People attached the machine to parts of their body externally or internally, hoping to be electro-shocked into wellness.

“These kinds of devices … were actually the [fourth] most common home appliance after we got electricity in the home,” Ms Taylor said.