The push to crack down on selective breeding coincidences with Norway recently banning the breeding of Cavalier King Charles spaniels and English bulldogs due to concerns the practice is causing breathing, heart and eye issues.

The Australian Veterinary Association is concerned about the recent surge in popularity of brachycephalic dog breeds, such as British and French Bulldogs, Boston terriers and pugs. It’s calling for dogs with a muzzle length less than a third of the length of their skull to be banned from being bred or displayed at dog shows.

“Continued selection for a dramatically shortened face has resulted in multiple anatomic changes which cause brachycephalic obstructive airway syndrome … [which] affects the animal’s ability to breathe, exercise, thermoregulate, sleep, play and undertake other normal behaviors,” it states in a new policy document.

The peak body for veterinarians would also like to see these flat-faced breeds screened for spinal issues associated with their corkscrew tails.

Veterinarian and spokesman for the association, Dr David Neck, said while there were laws in Australia aimed at preventing the breeding of animals with defects, these were not routinely enforced.

In Victoria, it’s an offense to intentionally or recklessly allow an animal with a heritable defect to breed. But Dr Neck said the state’s list of defects did not include common defects such as the breathing issues that plagued brachycephalic dog breeds or intervertebral disc disease in dachshunds.

It’s not known how many, if any, breeders have been charged. A spokeswoman for Animal Welfare Victoria, a branch of Agriculture Victoria, said the state government department did not keep compliance data on these offenses.

“Victoria’s commercial dog breeding laws are the toughest in the nation,” the spokeswoman said.

Dr Neck said most flat-faced dogs struggled to breathe due to reckless breeding and would benefit from airway surgery, a high-risk procedure that costs between $1500 and $4000.

“We want the dog to have their best life and that involves airway surgery so they can breathe later in life,” he said.

A senior scientific officer for the RSPCA, Dr Sarah Zito, said breeders should be required to inform prospective buyers of the health and welfare risks of dog breeds with “exaggerated features” and the cost of managing these disorders.

Dogs Australia, the peak body for purebred breeders, is opposed to any bans on dog breeds and believes this would drive the industry underground.

The organisation’s ambassador, Dr Rob Zammit, said in a statement that dogs and owners were suffering at the hands of unethical breeders who bypassed the checks undertaken by reputable kennels, such as DNA tests to monitor bloodlines.

“Legitimate breeders are registered and regulated, so they can be easily identified,” he said. “Illegal operators usually only have a mobile phone contact – they’re largely untraceable, so there’s no pressure on them to observe health and welfare issues.”

Every week, a steady stream of dogs arrive at the Melbourne Bulldog Clinic in Cheltenham, in Melbourne’s south-east.

Surgeons at Dr Marcus Hayes’ clinic then get to work, removing tissues from bulldogs’ nostrils to improve airflow, thinning and shortening their elongated palates and removing tonsils and saccules in the larynx.

“Breeders will tell you that most of these dogs don’t have any problems,” Dr Hayes said. “But these dogs suffer from nausea, chronic vomiting, an inability to enjoy normal exercise under normal conditions and most lead sleep-deprived lives because they have restricted airflow. Surgery allows them to live their most comfortable life. What we’ve done to them as humans is absolutely horrendous.”

Dr Hayes has been agitating for a raft of changes to stamp out unethical, selective breeding. He said breeders were not incentivized to change their behavior because “flatter faces are more popular”. 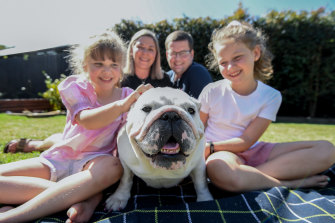 While the surgery was largely preventative, it’s dramatically improved Maggie’s quality of life. She no longer snores, vomits or suffers reflux and can walk two kilometers with minimal recovery time. Before the surgery, she was unable to walk more than one kilometer and would then collapse on the ground for an hour, panting heavily.

“We walked into this so ignorant,” she said. “We feel very guilty.”

While Maggie is adored by the Strachan family, and even gets her claws painted by Isla, 9, and Holly, 6, they won’t be rushing to buy another British bulldog.

“I don’t think we could buy another one ethically,” Ms Strachan said. “I feel like we would be encouraging bad breeders.”

It’s a similar story for Ms Holbrook, who has vowed to never buy another dachshund.

While Ms Holbrook can’t bring back her beloved Angus, she’d like consumers to be aware of the health risks associated with certain dog breeds.

“We need to take a step back from how incredibly cute and adorable sausage dogs are,” she said. “We need to ask questions about animal welfare. What’s the right thing to do?”

The Morning Edition newsletter is our guide to the day’s most important and interesting stories, analysis and insights. Sign up here.