Have you dreamed of a Doberman or thought about adopting a Dachshund? Do you think about the special personalities of a pug or maybe a poodle? Would you like to know the differences between an American Cocker Spaniel and an English Cocker Spaniel?

If so, consider coming next Saturday and Sunday 14-15. August, at the recently reopened San Diego Convention Center for the American Kennel Club’s Meet the Breeds event.

The education-based weekend show is expected to attract hundreds of different dog breeds from across Southern California to the venue at 111 W. Harbor Drive in downtown. This is the only stop on the Seven Cities Tour on the west coast.

Information about the country of origin of each breed, the historical purpose and function of the respective dog line and its characteristics as a family pet will be provided at individual stands in the convention center.

A family takes a closer look at the Beagle at a 2020 “Meet the Breeds” event in New York. The AKC events provide an opportunity for those considering pets to learn about different breeds.

The organizers of the nonprofit AKC say the event promotes responsible pet ownership and gives people a glimpse into the breeds that are suitable for them. While the animals will not be given up for adoption at the event, visitors can meet, stroke, and play with the canines on site.

“This event can help people make an informed decision about the type of dog they want,” said Brandi Hunter Munden of the AKC. “By looking at a husky mix online, you can come and learn more about the characteristics of husky, how they blow (shed) their fur. When you think of a Dachshund, you will learn how they love to dig holes.

“Once you learn about the breeds, how big they get, how much exercise they need, what traits they have and what care they need throughout their lives, you can make a better decision which dog to go with She is best suited. And you can pet cute dogs all day long. “ 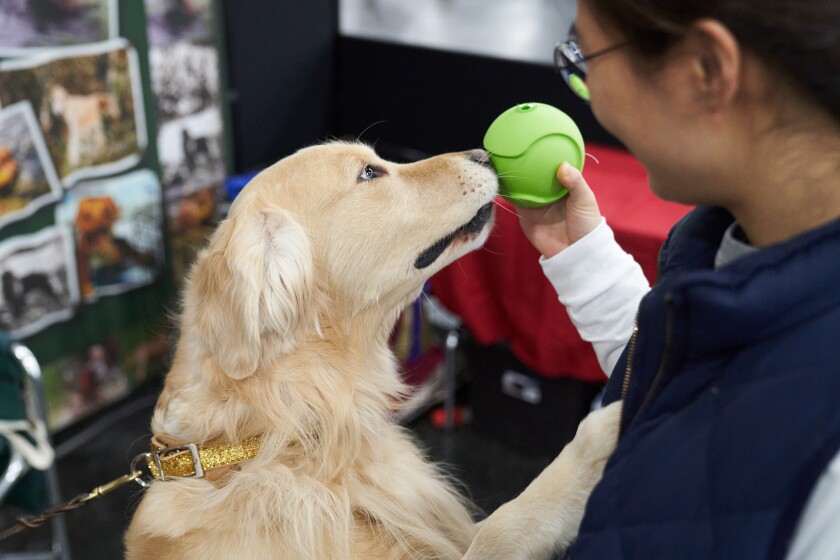 A Golden Retriever represents its breed at the 2020 American Kennel Club event in New York.

The event includes demonstrations of dog sports such as flyball, relay teams, and rallies; Police sniffer dogs; interactive spaces; a place for people to try an agility class; and photo opportunities galore.

The AKC is hosting Meet the Breeds in New York City in its 136th year, 11 years, but this year the event is moving to cities across the United States and kicking off its first national tour in San Diego.

Why start in San Diego?

Amber Vallejo, president of the Bulldog Club of Greater San Diego County, will bring some “good breed representatives” to the event, although a planned “kissing booth” will not take place due to COVID-19 health protocols. Vallejo said Bulldog fans can opt for “Shake the Paw” at the event instead.

Vallejo said her group is working to educate people about bulldogs and dispel the notion that they are not the healthiest breed. She said that people should distinguish between commercial breeders and those like her who breed dogs as a hobby “to keep the breed’s healthy line going.” People should always visit the place where their dogs are bred, she added.

“Failing to breed a bulldog properly is a disservice to the dog,” said Vallejo. “We are maintenance breeders and we believe there is a standard that has been developed and we breed to keep this standard bred bulldog going. Hobby breeders tend to breed for health, not profit, and because we enjoy the breed and dogs in general. “

She said the true nature of the AKC-sponsored clubs is “raising the proper breed standards” and that the AKC specializes in the certification (issuing of dogs), agility and obedience of the dogs it has registered.

Steve Dale, a certified animal behavior specialist and radio host, said he felt that “it’s really important to understand what you get when you get a dog.”

Dale said he supports these hobby breeders “who work very hard to get a dog’s temperament as good as possible and minimize health risks,” adding that “a place where you can never buy a dog is in one.” Pet shop is. because no responsible breeder will ever, ever, ever, ever sell in a pet store. “

However, Dale, the Humane Society of the United States, and others have criticized the AKC in the past, saying the group does not oppose irresponsible breeders – such as those involved in so-called “puppy mills” with animals living in poor conditions Mass breeding are held. 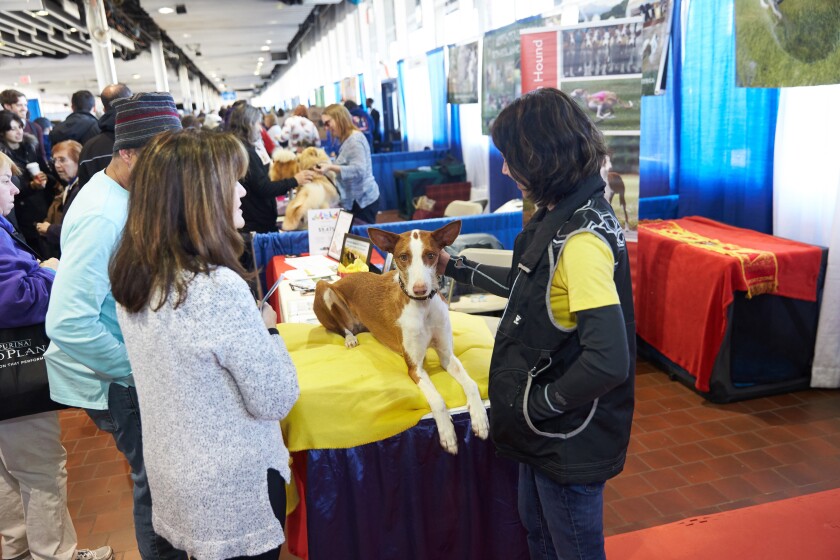 Dog lovers are hosting a Meet the Breeds event in New York in 2019. Although animals will not be available for adoption at the San Diego event, there are plenty of opportunities for visitors to greet and pet the animals.

Only four states, including California, have current laws prohibiting commercially-bred dogs, cats, and rabbits from being sold in pet stores. In California, only animals from a rescue organization or animal shelter may be sold in a pet store. The other states are Maine, Maryland, and Washington. Illinois stands ready to follow suit, said Dale.

He suggested that people go to rescue organizations where each breed is available.

Hunter Munden said that while the AKC is “really about education,” the group prides itself on having a “vast network” of 501c-3 rescue organizations that it works with. She said that every club has a rescue component on their registry.

“We do not support any form of irresponsible breeding, and to say that is a long-standing myth that is actually not true,” she said. “We have a compliance department that does inspections. We have inspectors who travel and go out 300 days a year. If we get legal action or animal cruelty, we punish these breeders. “

“Meet the Breeds” runs from 10 a.m. to 5 p.m. on both days. Tickets start at $ 27 with early access and VIP packages. No pet dogs are allowed. In accordance with the Americans with Disabilities Act, only service animals are allowed in the convention center. Event organizers will encourage social distancing and recommend masks for two-legged visitors, with disinfection stations set up throughout.