An international research team led by Dr. Ana Guadaño at the Alberto Sols Biomedical Research Institute (IIBM, a combined CSIC-UAM center) and involving the Complutense University of Madrid (UCM), used CRISPR gene editing techniques to incorporate into mice a mutation of the MCT8 protein responsible for transporting thyroid hormones to the interior of the cell.

Patients with mutations in this protein suffer from Allan-Herndon-Dudley syndrome, a rare disease that takes the form of serious neurological alterations, in which each patient may reveal a different mutation of MCT8.

This study, published in Neurobiology of Disease, describes the first avatar model for the disease—in other words, the first animal model with the same genetic alteration as various patients.

“The development of avatar models faithfully reproducing the patients’ alterations with this same mutation is the first step towards targeted therapy. It specifically lays the foundations to allow us to study the possible ‘genetic repair’ of this mutation in an animal model, and to evaluate whether this serves to avoid or revert the serious neurological alterations which exist in such patients,” says Carmen Grijota, researcher at the Cellular Biology Department of the UCM and IIBM. 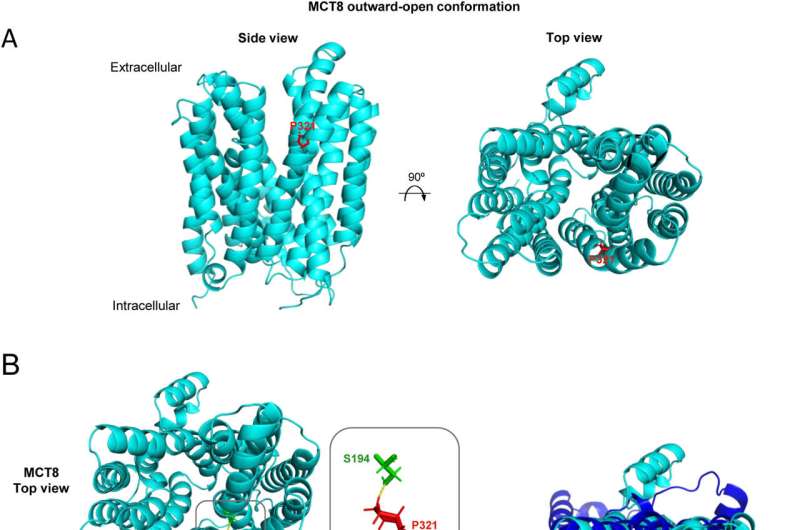 Tertiary structure of MCT8 homology model in the outward-open conformation. (A) MCT8 structure was predicted using the Robetta server based on the cryo-electron microscopy structure of the outward-open conformation of human MCT1 (PDB: 6LYY). The model was refined to eliminate non-precisely predicted residues (>5 Å of error). Side (left) and top (right) cartoon views of the MCT8 structure were generated with PyMOL software. Proline 321, the residue mutated in two AHDS patients, is shown as red sticks. (B) 3D alignment of MCT8 (light blue) and MCT8-P321L (dark blue) models show a decrease in the distance between TMHs in the mutant. P321L mutation changes the amino acidic interaction network in MCT8. Changes in TMHs position between both models are indicated with red arrows (right panel). MCT8-P321L structure was predicted as described in A. 3D alignment was performed by means of Pymol software. P321L mutation changes the amino acidic interaction network in MCT8 (left panel). While P321 residue only interacts with S194 from TMH1, the P321L mutant also interacts with I197 from TMH1 and W431, L434, and V435 from TMH8. Intra-protein interactions of MCT8 and MCT8-P321L were assessed by RINGS 2.0 and the predicted amino acidic interaction networks were represented by Pymol. Residues are shown as colored sticks. (C) A comparison of the structure of the inner pocket of MCT8 (yellow) and MCT8-P321L (green) shows a dramatic change in the shape and size of the pocket. MCT8 (light blue) and MCT8-P321L (dark blue) are shown as cartoons with the inner cavity represented as a surface in yellow and green respectively. Hormone influx sense was represented by blue arrows. Triiodothyronine (T3) structure was represented as yellow sticks. CASTp server and PyMOL were used for substrate-binding pocket volume analysis and image generation. Credit: Neurobiology of Disease (2022). DOI: 10.1016/j.nbd.2022.105896

Same neurological and motor alterations in avatars and humans

This study used mice carrying the “P321L” mutation. Tests were conducted to study the behavior, levels of anxiety and motor coordination capacity of the mice. The animals’ brains were then extracted and specific stains applied to review and study different types of neuron.

“Lastly, an in-depth computerized analysis was conducted to understand how the mutation could be affecting the structure of the MCT8 carrier, and hence its function of transporting thyroid hormones,” says Víctor Valcárcel, IIBM researcher and co-author of the paper.

According to the scientists, the next steps to be taken in their research would involve the administration of drugs that mimic the activity of thyroid hormones, but do not require MCT8 to enter the cells, because they use other different carriers. “The idea is to ascertain whether these drugs can reach the brain of the mutant mouse and improve all these alterations,” explains IIBM researcher, Marina Guillén.

Provided by Complutense University of Madrid

This document is subject to copyright. Apart from any fair dealing for the purpose of private study or research, no part may be reproduced without the written permission. The content is provided for information purposes only.