When Geelong midfielder Brandon Parfitt was out for the rest of the year, Tom Stewart, another Cat whose season was deemed over, made an enticing return to training.

Stewart returned to straight-line running and kicking the ball in training on Sunday as he continued to rehabilitate from a Lisfranc ligament injury in his foot that required surgery.

While it still seems very unlikely that the Australian defender could return this year if the Cats reach the pre-finals and a grand final two weeks later, they are currently unwilling to completely rule him out.

Tom Stewart is training with the Cats again. Credit:AFL photos

Stewart’s long-term future is a priority, as coach Chris Scott previously said and soccer manager Simon Lloyd reiterated on Monday, but the sight of Stewart back in training has been encouraging to the mood of the Cats players and officials currently in Perth. 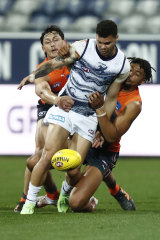 “We’ll entertain it when we have to,” said Lloyd of Stewart’s possible surprise availability should the Cats win in the pre-finals.

“He’s started running and kicking, walking in straight lines, and he’s dressed well, but he still has a lot of areas to tick off – change of direction, aerial work, speed – before continuing, and at this point that we are sitting here, we don’t have to make that decision.

“It will be a medical decision about what happens next to Tom, not a football decision, and it will keep an eye on Tom’s long-term health.

“Even though he started running, which is only part of his rehabilitation program, he is not ahead of him, he has not been accelerated, he is still on the timeline we set from the beginning.”