Suicide is an issue affecting the veterinary profession, but not to the extent that it’s been made out to be, according to experts. More importantly, suicide is preventable. That there is hope for survivors—nine in 10 go on to live after an attempt—also doesn’t get discussed as much.

The general inaccurate discourse focusing on suicide in the veterinary community as an epidemic serves only to trigger vulnerable individuals and diminish the effective ways to combat it, according to the experts.

A few of those individuals spoke at the first Suicide Prevention Roundtable convened by the AVMA, American Association of Veterinary Medical Colleges, and American Foundation for Suicide Prevention. Jen Brandt, PhD, AVMA director of well-being, diversity, and inclusion initiatives, said the Sept. 14 meeting was called because of the need to address the ongoing proliferation of misinformation and the harm it causes and to instill hope that things can and do get better.

Images courtesy of the American Foundation for Suicide Prevention 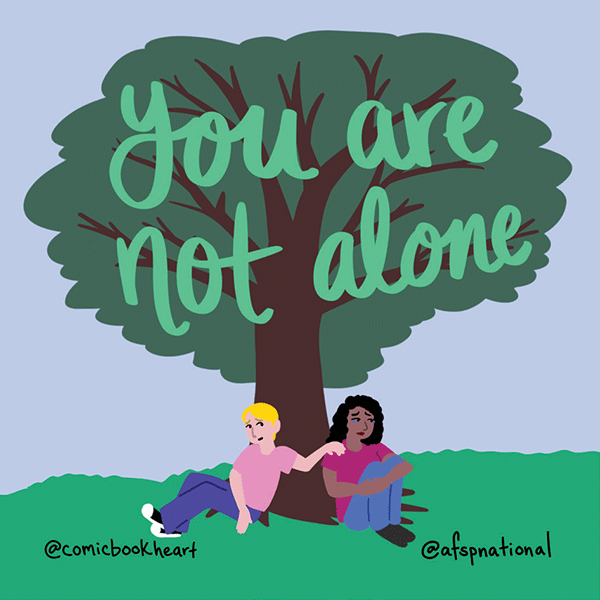 “It may not be easy, and you might not feel better overnight, so it’s important we consistently convey that with appropriate support, the sense of hopelessness—and thoughts of suicide—do lift,” she said. “Suicide is not an inevitable outcome of someone experiencing pain or crisis in their life. Nor is one’s choice of occupation the root cause of suicide.”

Held with more than two dozen stakeholders, the roundtable aimed to change the prevailing narrative with evidence-based strategies for suicide prevention and effective communication on the topic.

Evidence indicates that addressing the stigma against seeking help and removing barriers to accessing mental health treatment are key ways to help those considering suicide and that talking about suicide publicly can help when done in a mindful and informed way.

Dr. Janet Donlin, AVMA CEO, said addressing how the veterinary profession talks about suicide is a matter of public safety. She said, “We are a caring, giving community … and we will continue to work together to use evidenced-based prevention and communication in this area.” 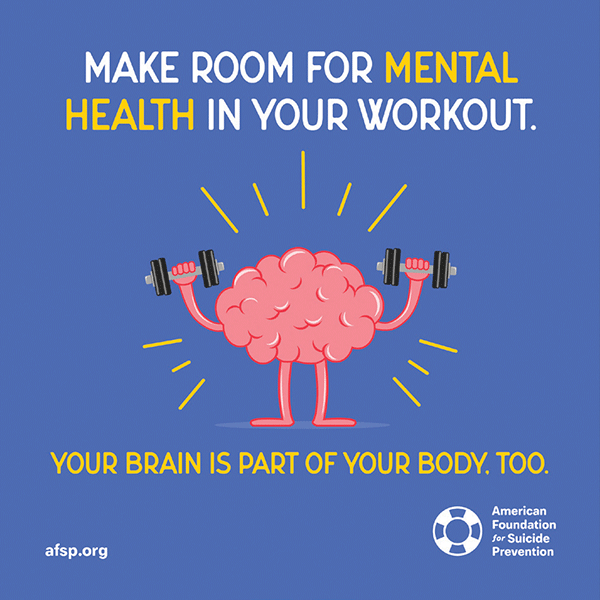 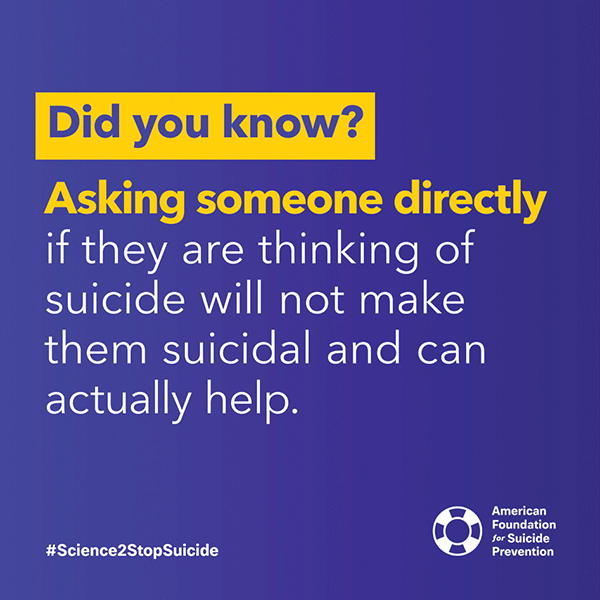 Christine Yu Moutier, MD, is chief medical officer of the AFSP, the largest nonprofit that is fighting suicide, with chapters in all 50 states and a stated mission to “save lives and bring hope to those affected by suicide.”

“When I hear things like physicians or veterinarians have the highest rate of suicide in the world, those are not true statements,” she said during the roundtable. “It is true we have higher rates than the general population, though there are many industries whose rates are higher.”

Doreen Marshall, PhD, who oversees the AFSP’s Prevention and Education Program and Loss and Healing Program, pointed out during the roundtable that suicide is rare enough that it’s calculated by a rate of suicides per 100,000 individuals.

“Saying suicide is an epidemic is saying it’s more of a problem than it is and that there is nothing you can do about it when we actually can,” Dr. Marshall said.

She pointed to a study by Tracy K. Witte, PhD, and others published in JAVMA in 2019 (J Am Vet Med Assoc 2019:255;595-608), which found that 40% of suicides by veterinarians were by poisoning, “which says to me there are preventive strategies to think through for lethal means.” The two most commonly identified substances were pentobarbital or opioids.

Dr. Moutier, the AFSP chief medical officer, said every industry that her organization works with has its own cultural factors, and occupation is just one potential layer of influence in terms of attitudes and behavior in managing mental health. Many other factors also play a role, including family history of suicide, genes, and prior trauma or adverse childhood experiences, which are largely invisible to others. Suicidal behavior, she said, is never a one-cause phenomenon.

“That’s hard for us because if you’ve experienced loss from suicide or attempted suicide, you want to find a way to understand it,” she said.

In fact, a lot of suicide risk doesn’t even come to the conscious level, she said. Psychological autopsies, in which trained investigators glean data from interviews, records, and other sources, can uncover more than a dozen factors not often visible to others.

“Suicide behavior requires a cognitive process,” Dr. Moutier said. “That’s what has confused the world for so long. Those decisions are made by a brain that, at that moment, is a distressed brain.”

Although there is frequently incorrect speculation that suicide has a singular cause, such as a poor online review or a challenging encounter with a client, the most common risk factor for suicide is unaddressed mental health conditions or stress.

For health professionals, Dr. Moutier said, some of their personality traits can become liabilities, such as the need for control and achievement, exaggerated sense of responsibility, and difficulty taking time for oneself or asking for help.

According to the 2020 Merck Animal Health Veterinary Wellbeing Study, 57% of surveyed veterinarians agreed with the statement “Veterinarians are caring toward those with mental illness,” compared with 24% in the 2018 study. Yet, in the 2020 study, 52% of distressed veterinarians who needed mental health treatment or therapy in the past 12 months said they didn’t get it.

“There’s stigma on a cultural level and then stigma among those suffering,” Dr. Moutier said. “You have to remember, if you’re sick, if you don’t feel like yourself, you feel frightened and vulnerable. Your brain plays tricks on you. That internal layer of dialogue is something we have to go out of our way to overcome,” and people are not great at calibrating their own level of distress.

One common misconception is that if someone has been diagnosed with clinical depression, post-traumatic stress disorder, or some other mental health issue, their work must be impaired.

For the vast majority of those who manage a mental health condition and more proactively address it, Dr. Moutier said, it will likely never affect their work. She said: “You want to optimize your clarity of mind and functioning. That’s what therapy can do.”

Lizzie Lockett is chief executive of the Royal College of Veterinary Surgeons in the United Kingdom and director of Mind Matters, a U.K. initiative that seeks to increase the accessibility and acceptance of support for mental health issues. She was interested by the idea that medical professionals are not great at help-seeking behavior.

“There’s a linkage between mental and physical health, and it’s interesting how much easier it is to talk about physical health and not mental health. One can be supported with the other,” she said during the roundtable. “We always make sure animals have good physical health and behave in way that is natural to them, but that doesn’t always happen with veterinarians themselves. We can’t care for other people until we sort ourselves out.”

Suicide prevention requires both individuals and organizations to play a role, according to the experts. The CDC has come up with the following recommendations:

Practices to promote well-being and resilience need to be cultivated at all stages of a career, from student to retiree, and are a shared responsibility, Dr. Moutier said.

“A healthy professional culture will lead to improved health care for all providers and patients,” she said. “It’s having an environment that feels safe and supportive at baseline and continuously reminds people that we’re stronger together and we can connect with one another and that mental health is real and the support and resources are available.”

For people at risk of suicide, the first step is to acknowledge the risk so they can take action for themselves, Dr. Moutier said, which is why it is important to reach out to others when they do show signs of risk. A common myth is that just because someone is thinking about suicide means the person is at risk of dying of suicide.

“You will not make someone suicidal by asking about it,” Dr. Moutier said. But there are ways of handling the conversation better than others. Let the person talk, and ask opened-ended questions. If the person has a tone that seems hopeless, you can say, “When you say X, I wonder if you’ve had thoughts about ending your life,” and let the person take it from there. Or you can call a suicide lifeline to get advice or help for the person.

Dr. Moutier said that ideally a workplace would have a team of people, who represent various levels in the institution, committed to coming together around this topic, whether in the aftermath of a suicide or working to prevent one.

“It takes time and energy but will not only address things in the moment, but also next steps moving forward,” she said.

Language matters when discussing issues of suicide. For example, Jen Brandt, PhD, AVMA director of well-being, diversity, and inclusion initiatives, would say, “I’m working with someone who is experiencing suicidal thoughts,” rather than, “I’m dealing with someone in a suicidal crisis.”

The language used when talking about suicide is important, said Dr. Marshall of the AFSP. Discussion can occur in many places, from social media and podcasts to blogs and news stories to email.

“The public messages about suicide can impact those who are grieving, those with lived experience, and those who are vulnerable,” she said. “Unsafe messaging can increase risk of contagion among vulnerable individuals.”

For example, the term “suicide attempt” is acceptable but not “failed attempt” or “unsuccessful attempt” because those terms attach judgment to the attempt. And it is acceptable to use the term “died by suicide” but not to use the terms “committed suicide” or “successful suicide” for the same reason, with “committed suicide” sounding similar to “committed a crime.” Or don’t say “veterinary suicide,” but “suicide in the veterinary profession,” because there are reasons for someone to die by suicide that may in fact have nothing to do with their work.

Helpful suicide messaging should also have some positive or hopeful narrative along with a call to action for help-seeking, either by sharing a lifeline number such as 1-800-273-TALK or a website such as Lifeline. The information should be factual and grounded in research on suicide prevention.

“Don’t speculate on stressors or risk factors except to highlight that suicide is complex and we can’t know who ends their life and for what reasons,” Dr. Marshall said.

By positive messaging, Dr. Marshall means information about actions that people can take to help prevent suicide, how prevention works, that resilience and recovery is possible, and that effective programs and services exist.

Dr. Brandt of the AVMA said, “We know suicide is preventable, and evidence-based resources provide vital guidance into how we can help the profession by minimizing the risk of suicide contagion and maximizing our collective impact.”