Ori Itzchaki is an aspiring journalist. For the magazine of Shavvim, an Israeli organization for people with disabilities, he interviewed “Wonder Woman” Gal Gadot and the Brazilian football legend Ronaldo.

For now, however, journalism is not paying the bills for this 27-year-old Tel Aviv resident on the highly functional end of the autism spectrum. Itzchaki tried working in a coffee shop, a gardener, and other jobs that he found boring.

And then his social worker at the Beit Ekstein organization referred him to Dogiz, a Tel Aviv company with a social project called Walking Together.

Or Itzchaki and one of his dog customers. Photo courtesy Dogiz

“I love the dogs so much and enjoy going for a walk with them – except when it’s very hot outside,” he tells ISRAEL21c. “This job is very healthy for me because it helps me stay fit.” 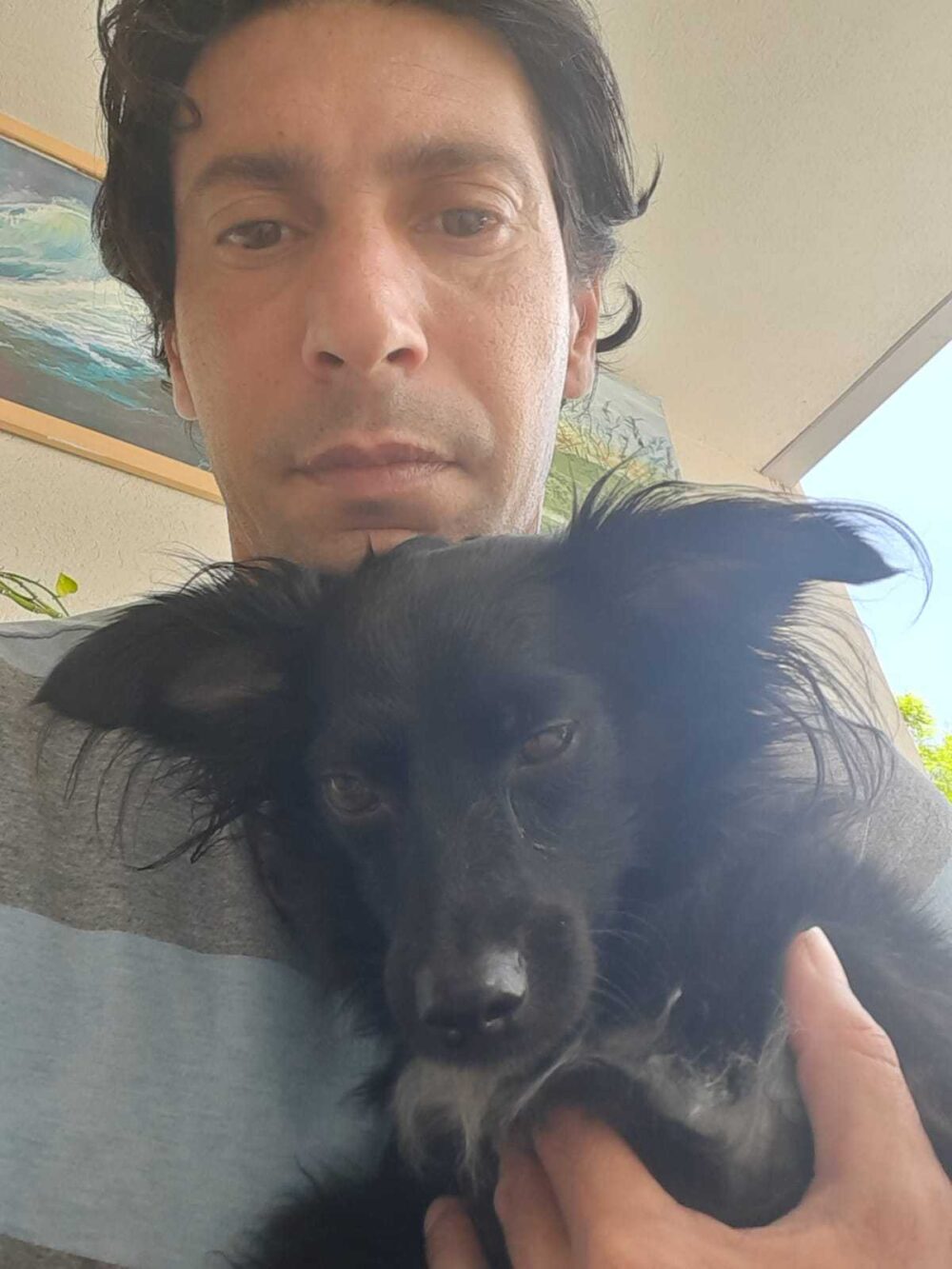 Dani Gindi with one of his Walking Together protégés. Photo courtesy Dogiz

Dani Gindi, 42, also came to Walking Together after a series of unhappy job experiences. Although Gindi can’t read, he can find every address with the intuitive Dogiz app. He is unusually hardworking and manages eight walks a day.

As ISRAEL21c reported in 2017, Dogiz originally offered a smartphone app that connected urban dog owners with local walkers, trainers, dog groomers, dog sitters and veterinarians and provided these small businesses with management software. Eventually, Dogiz consolidated some of the stores under its own brand.

The first Dogiz dog walker was Avrum Friedman, a young man with an autism spectrum. His father, Aviad Friedman, became the chairman of Dogiz, raising awareness among the co-founders about the employment challenges of people with disabilities.

“That became the core of what Dogiz is about,” says Djanogly.

“We’ve always wanted to do some kind of ‘Profit with Purpose’ project, and that’s an amazing way to do it.”

He and his co-founder Alon Zlatkin learned that adults on the autism spectrum are chronically underemployed, stuck below their skills in low-paying jobs, and are often exploited by their employers.

In addition, many people on the spectrum find it easier to connect with animals than with humans. Interacting with animals has been shown to help them reduce stress and blood pressure and even improve their interpersonal skills. 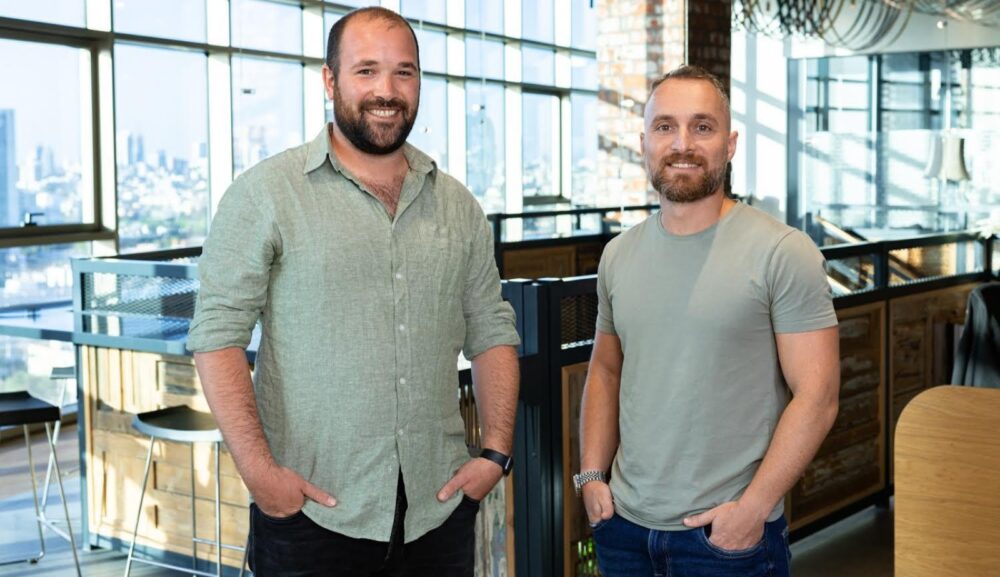 “We saw research on the mental and physical health benefits of people with autism who work with dogs, and we knew that employing them as dog walkers was a win-win-win idea,” says Djanogly.

“It’s about giving people the opportunity to work with dignity in a job that keeps them fit, active and financially independent. We were amazed at how effortlessly the synergy fit together. “

During the pandemic, when fewer dog owners needed strollers because they were at home, Walking Together customers continued to book, “just to give these guys, who are some of our best employees, an opportunity. They are hardworking and love what they do, ”Djanogly told ISRAEL21c.

Dogiz wants to increase the proportion of his disabled people to 20 by the end of the year. Some future employees may be from Oketz, the IDF canine unit that offers non-combat roles to soldiers on the autism spectrum. Walking dogs can be a great option for post-military employment.

“We want to be one of the largest employers for people with special needs in Israel,” says Djanogly.

Dogiz hired a behavioral analyst / therapist to assess the physical and emotional abilities of the Walking Together candidates.

“It’s in our interest to hire people who can do this job for the long term,” says Djanogly.

Every new Walking Together employee takes part in a month-long training course led by a dog trainer who is experienced in working with disabled people. You will learn to use the Dogiz app and talk to customers.

“We quickly realized that they needed emotional support,” says Djanogly, and Dogiz offers this through monthly meetings with a counselor.

“We work with wonderful organizations like Shekel and Beit Ekstein and with special schools in Tel Aviv. They help us to support our employees and to offer them more than just a job, ”says Djanogly.

“We want them to generally acquire life skills that can be hard to come by after leaving the education system,” he adds. “The Walking Together staff meet with us monthly to set goals and expectations, and they meet with their advisors on a weekly basis.”

Dogiz has invested in these services.

“We incur costs, so we raised money to support this. But we believe this model is not just a nice-to-have charity project on the side. It’s a robust business model. “

In June, Dogiz invited investors and families of Walking Together employees to an event where dog walkers, including Itzchaki and Gindi, shared their stories. 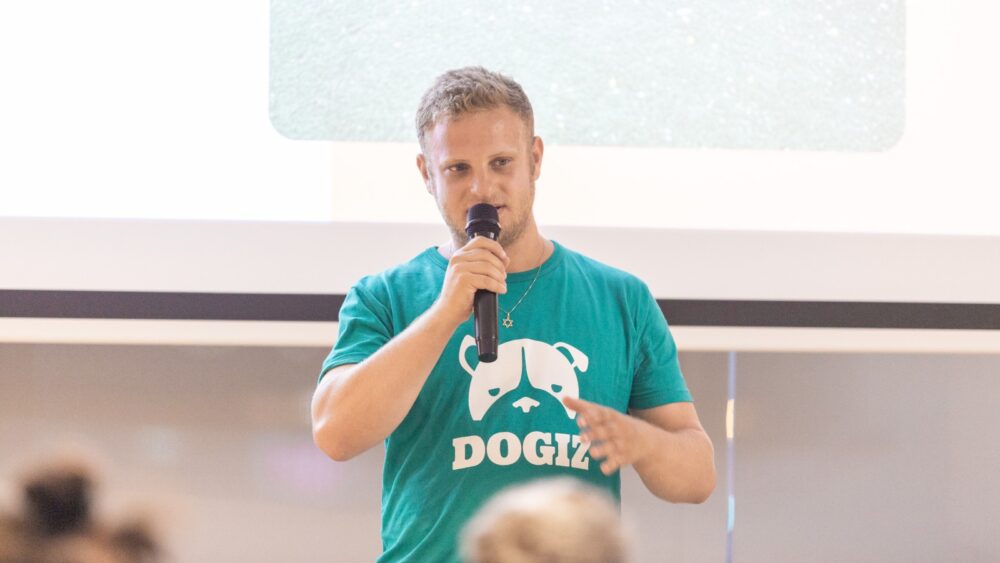 Ori Itzchaki tells investors about his success with Walking Together. Photo courtesy Dogiz

Djanogly and Zlatkin have recognized that every success at work has beneficial effects on the whole family. “Dani Gindi’s sister said that she can now sleep well at night because she knows that her brother has a good work situation,” says Djanogly.

Dogiz, which has spread to central Israel and is now launching in Haifa, is developing a new digital health product to help people better groom their dogs using crowdsourcing and AI.

“This will add more services and increase the opportunities for people with special needs in our company,” says Djanogly.