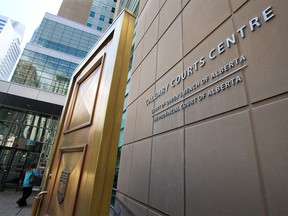 If Calgary dog ​​owner Andrico Reid had followed veterinary advice for treating his pet she would not have suffered severely before having to be euthanized, a prosecutor said Friday.

But the lawyer for Reid, Parbinder Bhangu, said his client attempted to care for his pet using alternative methods and never intended Seiko to suffer.

But in seeking a conviction on two Criminal Code charges of animal cruelty and one under the provincial Animal Protection Act, Munn Gafuik said Reid simply decided he knew best how to care for his dog, which led to excruciating pain for Seiko before she was euthanized in July 2020.

The prosecutor noted the dog was grossly underweight in February 2019, the last time Reid took her for veterinary care after the Calgary Humane Society initially intervened.

His attitude was “he knew what was best for Seiko,” she said.

Munn Gafuik said Reid told Dr. Iain Chynoweth “that he had a degree in herbal medicine and that was the medicine he believed in.”

By the time humane society officers seized the dog on July 5, 2020, after a citizen spotted the dog on Reid’s balcony and called authorities, Seiko was severely emaciated.

“Essentially just skin on a skeleton,” Munn Gafuik told Barley. “She was completely emaciated to the point where she could barely stand.”

The prosecutor said that while Reid told authorities he was regularly feeding his dog, it was certainly not adequately.

The veterinarian who examined Seiko when she was ultimately seized, Dr. Margaret Doyle said if the animal had been completely starved it would have taken four to six weeks to get to the shape she was in.

Doyle said the dog’s skin problem was an autoimmune disease which would likely have resulted in a full recovery 80 per cent of the time if she was properly prescribed steroids.

Barley will hand down a verdict on July 15.

Sign up to receive daily headline news from the Calgary Herald, a division of Postmedia Network Inc.

Thanks for signing up!

A welcome email is on its way. If you don’t see it, please check your junk folder.

The next issue of Calgary Herald Headline News will be in your inbox soon.

We encountered an issue signing you up. Please try again

Postmedia is committed to maintaining a lively but civil forum for discussion and encouraging all readers to share their views on our articles. Comments may take up to an hour for moderation before appearing on the site. We ask you to keep your comments relevant and respectful. We have enabled email notifications—you will now receive an email if you receive a reply to your comment, there is an update to a comment thread you follow or if a user you follow comments. Visit our Community Guidelines for more information and details on how to adjust your email settings.