Low-cost rabies vaccination clinics for dogs and cats are returning to six rural Lambton County communities in April and May after the annual program paused for two years because of the pandemic. 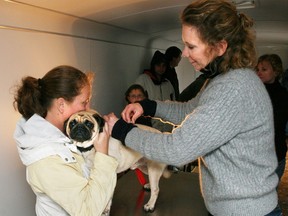 Low-cost rabies vaccination clinics for dogs and cats are returning to six rural Lambton County communities in April and May after the annual program paused for two years because of the pandemic.

The drop-in clinics are organized by municipalities with veterinarians administering the shots for $25 to cover the cost of materials. The clinics only accept cash, and dogs and cats must be at least three months old, in good health, and leashed or contained. They also must not have been vaccinated within the past year.

“It is important to prevent the spread of rabies to get your pets vaccinated,” said Lori Lucus, supervisor of health protection with Lambton public health.

Rabies vaccinations are also required by law in Ontario for cats and dogs older than three months, she said.

On April 2, the clinic will be at the public works garage at 4590 Lambton Line in Rutherford from 9 am to noon, and then from 1 pm to 3 pm at the Dawn-Euphemia Community Center at 6213 Mill St. in Florence.

About 900 animals are typically vaccinated each year at the clinics, Lucas said.

Human cases of rabies are rare in Canada, due largely to prevention and control programs, according to a Lambton public health report to Lambton County council.

There have been 26 deaths recorded in Canada since 1926, and Ontario’s latest human case involved a Toronto man found in 2012 to have acquired rabies while abroad.

There were two positive cases of rabies found in bats in 2021 in Lambton, Lucas said.

“We followed up 366 animal exposure investigations” that year, and 50 people received post-exposure rabies vaccine, she said.

Rabies is a fatal disease spread by the saliva of an infected animal that can enter the body through a bite or scratch, the agency said.

Post-exposure shots for humans can follow exposure to a wild or stray animal, Lucas said.

In cases where the report is an exposure to a pet, the agency contacts the owners, if they can be identified, to have them isolate and observe the animal for 10 days.

“We know that if the animal is alive and healthy after that 10-day period there’s no risk of rabies to that person who was begging or scratched,” Lucas said.

If the individual exposed to an animal requires the post-exposure vaccine, it is administered in four to five shots over several days.

Between 2012 and 2021, there were five cases of animal rabies recorded at Lambton. All were bats, the public health agency said. 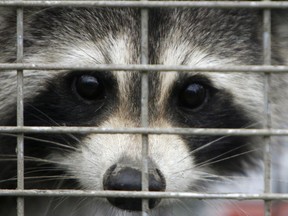 A captured raccoon peers through the bars of a trap in Grand Isle, Vt., in 2007. Photo by Toby Talbot /THE CANADIAN PRESS

Raccoon rabies re-emerged in Ontario in 2015 and, by July 2021, 486 cases had been identified in the province in six health units, including Hamilton, Halton, Niagara, Haldimand-Norfolk, Brant and Waterloo.

The province continued its efforts in 2021 to immunize animals in some areas of the province by aerial and hand baiting, as well as live trapping and immunization.