Several Ukrainian veterinarians shared with AVMA News their experiences since the Russian invasion began in February. Their lives have been completely upended by the war. Displaced, separated from their families, and in fear for their lives. Yet they endure, supporting their fellow citizens as well as the animals of Ukraine as best they can. Following are their stories, which have been edited for length and clarity.

In Ukraine after the Russian invasion, Dr. Denis Seleznov assists his colleagues in human medicine by sorting deliveries of drugs and medical supplies. (Photos by Dr Seleznov)

dr Andriy Kletsov, small animal practice owner
I own three veterinary clinics in the city of Sumy, which is 40 kilometers from the Russian border. Before the war I employed 25 veterinarians. Now I only have two employees, one of whom is my 70-year-old father, also a veterinarian. Everyone else has either fled or is hiding. Every day, there are air strikes that take the lives of my friends, and I’m tired of counting the losses. My wife has taken our children, niece, and disabled cat to the woods. We thought it would be safer, but there are explosions 200 meters away from the house where they are sheltering. My younger children are afraid of every loud sound, and when I see them so frightened, I want to cry. Nobody should have to see this.

dr Natalia Ignatenko, Ukraine representative to the European Federation of Companion Animal Veterinary Associations (FECAVA)
I couldn’t believe Russia would invade my country. I was under the deep delusion that peace is possible only when people continue to communicate with each other. After the annexation of Crimea in 2014, I attended the Russian Veterinary Congress and asked an audience of 5,000 colleagues to stand up if they did not support the war in Ukraine and wanted peace. Everyone stood, but eight years later, Russia invaded my homeland, and is bombing peaceful cities and residents. Many Russian colleagues support this war, and Russian voices against it are isolated. Each of these voices is extremely important to me, but I believe that until Russia withdraws its troops from Ukraine, Russia cannot be a member of international veterinary organizations. Many colleagues consider my request for a boycott to be unethical since we are veterinarians and save lives. But in my country, children are dying, civilians are dying, animals are dying because of Russian aggression, which is supported by a silent majority. I ask for a boycott of Russian veterinary events. International companies cannot sponsor events that take place in Russia nor should prominent veterinarians speak at the congresses of the aggressor country.

dr Anastasia Vasilyeva, small animal practitioner
I work at a companion animal clinic in Kharkov with my common-law spouse, Vladimir, and our roommate, Evgeny, who are also veterinarians. We did not hear when the Russians began bombing our city, and we awoke to the calls of worried friends and family. The clinic managers fled, leaving behind five animals, but the three of us continued working at the clinic for a week. We returned two animals to their owners with medication and food. There was a very ill cat we could not diagnose or treat because of the power outage. Unfortunately, she died. After four days, the managers returned for the equipment. Bombs started falling again on the seventh day, and we decided to flee. We still had two cats with us. We returned one to its owners, but the owners of the other cat refused the animal and it was released into the streets. The evacuation from Kharkov was comical in a way—two cats and six people crammed into a car built for four, but it all worked out. Sadly, our profession in Ukraine is dead for the foreseeable future. There is no money and no prospect of finding a job. Many of our veterinary colleagues are huddled in refugee centers with little hope for the future. 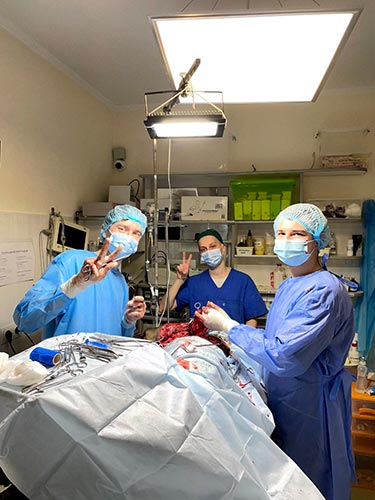 Veterinarians in the city of Lviv, Ukraine, operate on a dog with a gunshot wound.

dr Oleksandr Machuskyy, small animal practice owner
I own two veterinary clinics on the outskirts of Kyiv, but I closed one when staff evacuated. I’ve driven my family to Poland along with several clinic staff and their families. We’re taking in the pets left behind but there are no medicines or food for these animals. I’ve been networking with my veterinary colleagues, but they are having the same problems. I am not a soldier. I am a veterinarian, and I love animals. I do not want to fight, but I will if I have to because this is my country.

dr Denis Seleznov, veterinary surgeon
On the third day of the war, my family and I sheltered in the basement of our house in Kyiv because of the constant shelling. We fled to Lviv, normally a six-hour drive, but this time it took more than a day. Unfortunately, more and more internally displaced persons arrived in Lviv, so it was decided to evacuate my wife and children to Poland. I returned to Lviv, continuing to help with the resettlement of refugees and driving women and children to the Polish border. When my car no longer worked, I helped sandbag the city hospitals and sort the medicines arriving from the West. I also help my veterinary colleagues in Lviv, doing what I can. I don’t want anyone to experience what ordinary people encounter in war. No one even thought that the ambitions of individual countries could repeat the catastrophe of the last century (World War II)—a war of such magnitude that it turned into genocide.