A woman from Dartmouth, NS says she can’t believe she’s getting her dog back almost a year after River ran away in the Portapique, NS area.

Michelle MacLean got the call at 5 a.m. on Friday from one of the people who were working on tracking the pastoral mix. River was in Great Village, NS, about six miles from Portapique.

“I know it’s true, but part of me is like, ‘Okay, what will happen now before I take her home?'” MacLean said.

MacLean adopted River from Texas in late October 2020. She said River was shy when she arrived and got used to life in her new home.

“We were just beginning to get to know each other and were really just at the tip of this iceberg,” said MacLean.

This picture was captured by the motion detection camera after River was trapped on Friday, December 2, 2021. (Submitted by Kim Hillier)

She had just moved last December and was temporarily looking after the dog from a friend in Portapique. Out on December 30th, River took off.

The past year has been a lost-and-return cycle, sparked by the sightings of River.

“I just lost hope and then she poked her head back out to say, ‘Hey, here I am, I’m still fine,'” said MacLean.

Kim Hillier has read the post. She took a missing animal location class and contacted MacLean to volunteer.

Hillier said that one of the most important things to do after missing a dog is posting lost dog posters with tips from people about where the dog will be spotted. The sightings will then prompt the search efforts.

Armed with a trap and surveillance cameras, the Great Village resident spent countless hours wandering through wooded areas and moving the trap.

She even lost 10 pounds during the entire process while also cutting her hands and bruising her knees from tripping in the woods. 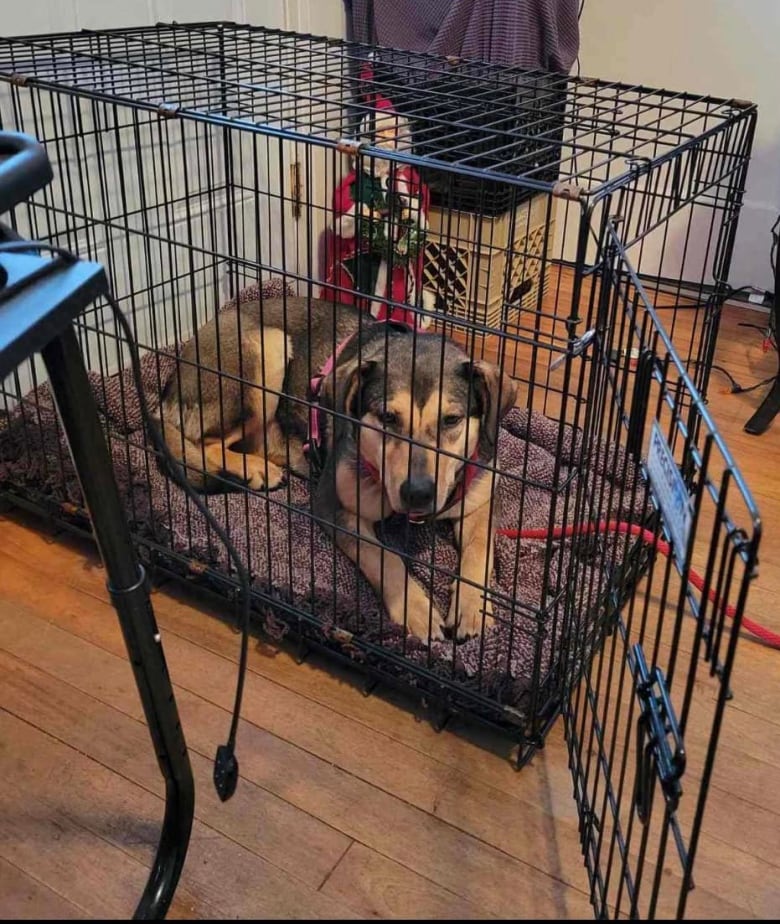 River is recovering at the dog-seeker Kim Hillier’s home. This photo was taken after River was caught. (Submitted by Michelle MacLean)

“It’s mentally tough,” said Hillier. “It costs a lot and people just don’t get it.”

River was a well-traveled dog who stopped in Pictou before eventually ending up in Great Village, minutes from Hillier’s house.

Hillier’s surveillance cameras send notifications to their phone when motion is detected. A bear was spotted in the trap two days before River was caught.

She said River appeared in the trap a couple of times in the past year but didn’t want to go in. Hillier suspects that something in River’s Texas life was holding her back.

But after the bear sighting, Hillier was even more determined to bring River home and set the trap again. 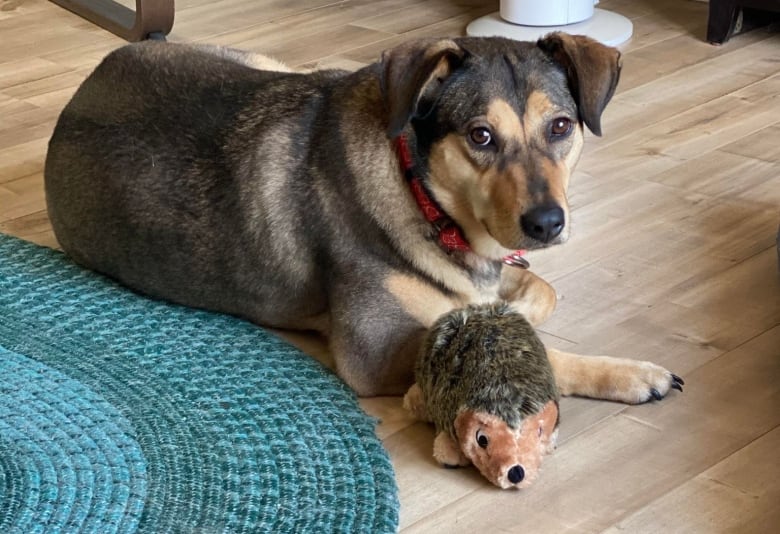 River can be seen in a photo taken shortly after she was adopted by MacLean in late October 2020. (Submitted by Michelle MacLean)

At 4:00 a.m. on Thursday, Hillier took a nap, expecting that she would be leaving shortly to fetch River. Her phone received notifications within an hour.

“The first camera showed them outside of the trap,” said Hillier. “The second brought them in. The third picture showed that the door was closed. Boom! I was out the door and up there within five minutes. “

Hillier works on a strawberry farm seasonally, so she can focus on searching outside of the strawberry season.

She was joined by Millie Hanlan, a Londonderry, NS resident who helped bait the trap while Hillier was working or taking a break from the search.

“You couldn’t take the smile off my face all day,” said Hanlan.

MacLean is grateful for the work of the volunteers and has helped them with their expenses. A crowdfunding campaign is also under way to pay for the search efforts and vet bills.

From experience, a connection has formed between MacLean and Hillier.

“The woman is an angel,” said MacLean. “Blood, sweat and tears, she didn’t stop. She went around the clock.”

The diagnosis from the vet

River has been examined by a veterinarian in Truro and is generally in good health, except that he has Lyme disease. She takes antibiotics for treatment. Despite her years of exertion in the wild, she lost little weight.

River is “decompressing” at Hillier’s house and will soon be returning to their Dartmouth home with MacLean.

After chasing River for nearly a year, Hillier admits she’ll miss the dog.