The motifs on the postage stamps four dog breeds – Beagle, Dalmatian, Collie and Pomeranian. The author of the stamps is Katarina Lončar, a designer from Zagreb.

The text on the occasion of the release of the new commemorative stamps was written by Boris Cebović, a small animal breeder. The Beagle is a fairly old and stable breed originating in England. It was first mentioned under this name in 1515 in the books of King Henry VIII, and a century later as a “little beagle”. One of the ancestors of the beagle was the so-called Hubert’s dog. In 1890, the British Kennel Club recognized and described this breed, which was created only for hunting, and individual, and especially for the pursuit of game in the pack.

Today, the beagle is up to 40 cm in height and weighs up to 18 kg, it is compact on relatively small, strong legs that give it speed and endurance. The head of this dog is long and has an excellent sense of smell, and one of the characteristics of the beagle is long, drooping ears. Beagle’s hair is short and firm, and all colors are recognized except brown – they are usually two-coloured, but there are also three-coloured.

Another important thing with a beagle is that the tip of the tail must be white and must stand straight up like an antenna. Beagles are intelligent dogs with a strong character and get along with other dogs after establishing a hierarchy because they try to impose themselves as leaders. The name of this beautiful breed speaks of its origin because the Dalmatian dog or popularly Dalmatian originates from our area. It is one of the oldest breeds, which is confirmed by the 4,000-year-old paintings found, which show a dog similar to today’s Dalmatian.

Throughout history, they were called the Dubrovnik hound, and later the Dalmatian birder. They served as a war dog and as an escort to the Uskoks of Senj, and was used in hunting as a bird hunter and retriever, and he also knew how to guard herds and hunt pests. The Dalmatian dog used to be often the forerunner and companion of fire trucks.

The International Kennel Club accepted it and prescribed the standard in 1955. When the cartoon “101 Dalmatians” started to be shown, the popularity of this breed rose sharply all over the world, especially after the feature film about their antics was made. This led to the fact that these dogs began to be bred en masse without paying attention to genetics, which led to certain health problems and shortcomings.

Today this has been resolved and if you want to get a Dalmatian dog, inquire about a kennel that has a reputation and good results at shows. It is a guarantee that you will get a healthy and stable friend.

There are many breeds of dogs named after their geographical origin (Scotland), but Collie also got the purpose for which they were bred. Although the origin of the breed has not been fully explored, it is assumed that they came to Britain at the time of the Roman conquests.

At that time, they did not look like this, and they were used for keeping cattle. Their present-day appearance is due to Queen Victoria, who brought several specimens of the Collie to London from a Scottish estate and began breeding them. Originally, these dogs were black to breed in multiple color combinations, and black was lost.

Collies are excellent both as service dogs and as therapeutic dogs for working with people with special needs. If you decide to get it, and you are an active family, find a proven breeder, get to know him and start raising him from day one – you will make a loyal friend for a long time who, in addition to occasional fur care, just asks you to give him a job. 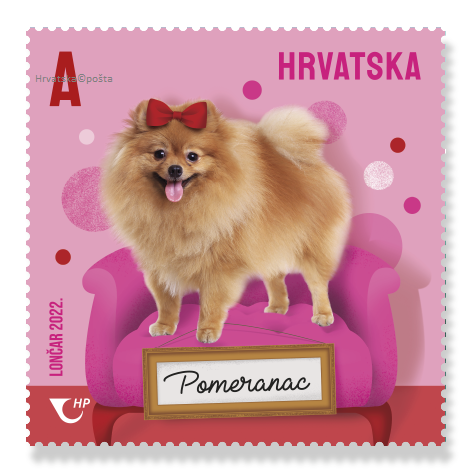 The Pomeranian is another breed of dog whose name comes from the area where it began to be bred, and that is Pomerania in today’s Germany and Poland. This dog originated from the Spitz breed, of which it is a miniature copy. During the 18th century, the breeding of small dogs began, and it is known that Queen Victoria had a very small spitz.

Pomeranians range from 18 to 22 cm. They have a thick and dense fur that consists of two layers: longer black hair, orange, grey, brown or white color protrudes through the thick undercoat, as well as a combination of the above. The hair on the neck resembles a lion’s mane and frames the face with a muzzle resembling a fox.

Their weight ranges from 1.8 to 3.5 kg, but they are not aware of that, so they act as if they weigh 40 kg. They are excellent guards and respond to any threat with loud and persistent barking. They are otherwise very sociable and playful and easily make friends with larger dogs, cats and people.