In a forest in the west African nation of Gabon, a chimp called Suzee plucks an insect from the air with a deft sweep of her hand.

She kills the insect, but then rather than discarding it, applies its crushed body to a wound on the foot of Sia, her adolescent son.

She’s not the only one to do this. The same behavior — applying a crushed insect to their own and others’ wounds — is observed in the chimp group 22 times over 15 months.

The researchers who documented the behavior in Current Biology earlier this week weren’t able to capture any of the insects to analyze, but hypothesized they perhaps contain a property that helps with wound recovery.

If they’re right, this is an example of animals practicing a form of self-medication, also known as zoopharmacognosy.

And it’s not the only case we know about.

Millipede with a black body covered in red stripes walking on the moss that covers a tree trunk, Ecuador.(Getty Images: Jarno Verdonk)

What would you rather — being bitten by mosquitoes or rubbed all over with a millipede? For capuchin monkeys from South America, it seems the latter.

The millipedes contain defensive chemicals, including benzoquinones, that have been shown to repel mosquitoes.

The monkeys have been recorded applying the millipede treatment more often in the wet season when mosquitoes were more abundant, as well as sharing the same millipede around. Capuchins have been observed rubbing themselves with millipedes.(Damien Larkins: ABC News)

In one study, when tissues soaked in benzoquinones were offered to captive monkeys, in the absence of any millipedes, they rubbed their bodies with the tissue and “drooled profusely”, according to the lead researcher.

While the hypothesis is that they use the compounds to repel mosquitoes, the problem, according to Bill Foley, who is an expert in the interactions between poisonous plants and animals, is in how we confirm these observations.

“The problem with understanding medicinal plant usage has always been experimental confirmation,” said Emeritus Professor Foley from the ANU.

He says there is some evidence in easily controlled species like sheep that they can self-medicate, but that wild animals are much harder to study.

“Obviously, there is little chance of experimental manipulations in chimps!”

Joint pain? There’s a balm for that 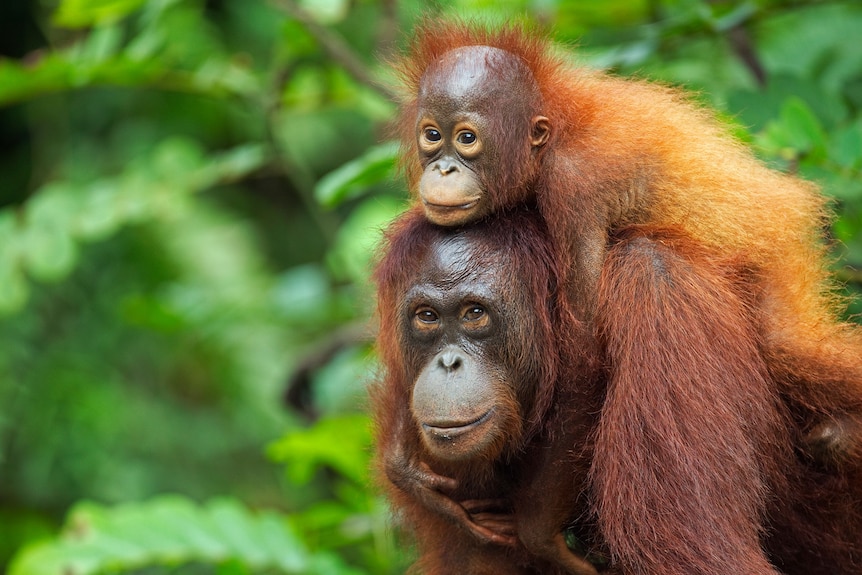 Orangutans are believed to use leaves mixed with saliva as an anti-inflammatory agent.(Getty Images: Anup Shah)

The only Asian great ape, orangutans have been observed concocting a salve of the leaves of a native plant called Dracaena cantleyi and their own saliva.

This forms a “foamy mixture”, which researchers say the orangutans rub onto specific points on the body.

Analysis of Dracaena has found that the leaves contain an anti-inflammatory steroid.

When the research was published in 2015, the animals had been seen on 10 occasions to be applying the salve, and nine of those instances involved female orangutans.

One explanation offered for the gender skew was that females may experience more arm strain from carrying babies while climbing.

And the mixture was most commonly applied to the arms, more so than any other part of the body.

However, it’s only orangutans from a specific region in the Central Kalimantan province in Indonesia that have been seen doing this.

So does this mean the orangutans might have learned from people? There’s some evidence to suggest it’s the other way around. Research shows that some indigenous discoveries of medicines have come from observing animals and by extension, Western medicine is also a benefactor of animal experimentation.

A number of Native American groups use a medicinal root called chuchupate, or “bear root”.

The root is reported to help with various ailments including an upset stomach, and bears have been seen consuming the root after emerging from hibernation.

According to Navajo legend, people learned of the root’s usefulness from bears.

But it’s not just mammals that are thought to engage in zoopharmacognosy. Red and green macaws are known to ingest clay, seemingly to aid digestion.

A research paper in Biology Letters found that sparrows may be lining their nests with cigarette butts to help repel mites.

Monarch butterflies — prone to parasitic infection — lay their eggs on anti-parasitic milkweed, wood-ants use an antimicrobial resin in their nests, dogs and cats eat grass to purge, and moths and fruit flies have been known to engage in what could be considered self-medication in their food selection.

So if they’re all doing it…

What about the cousins? There’s a lot of evidence that Neanderthals looked after their sick and injured.(Getty Images: Joe McNally)

Precisely when self-medication evolved is not clear, according to Michelle Langley from Griffith University, who researches the evolution of human cognition.

However, there is significant evidence in the fossil record that self-medication has its roots in deep history, she says.

Extracts of the plants contained anti-bacterial and anti-inflammatory properties, and the individual in question was knowing to be infected with a parasite that caused diarrhea, and to be suffering tooth abscesses.

Bone fractures were also common amongst Neanderthals, and many survived long term after suffering the type of injuries common amongst rodeo riders today, Dr Langley said.

Others survived without teeth and with significant disabilities — evidence of ongoing care from others. Ancient uses for plants and fungi, like this Amanita muscaria, are hard to determine because they’re rarely fossilised.(ABC Radio Sydney: Amanda Hoh)

One of the difficulties in this field of research is that soft-tissued plants typically break down well before they can become fossilised.

But if Neanderthals were using chemicals to treat illness, were they also using them for pleasure?

While there’s no rock-solid evidence of this, if humans are anything to go by, the chances are pretty good.

Those same geometric patterns have been found in cave art in southern Europe from the Upper Palaeolithic period.

Snuff, jimsonweed, betel nut, ayahuasca, alcohol and tobacco, and, in Australia, pituri, all have a deep history of human use as well.

In Siberia, both reindeer herders and their reindeer were known to consume the hallucinogenic mushroom Amanita muscaria.

One theory goes as far as to suggest that this is the origin of the myth of Santa and his “flying” reindeer.

But eating the mushrooms raw causes nausea and other unpleasant side effects in people.

To get around this, Siberian shamans would drink the urine of intoxicated reindeer. The urine would still contain the psychoactive ingredients, but be filtered of muscarine and other poisonous compounds.

If Neanderthals weren’t self-medicating for pleasure, it would seem they were out of the loop.

So long and thanks for all the puffer fish

Back in 2014, the BBC released footage of dolphins appearing to intentionally provoke a pufferfish into releasing its toxins.

If facial expression is anything to go by, the result was intoxicated dolphins.

At the time, the filmmakers described the unusual behavior of the animals after playing with the pufferfish, which included looking skyward under the surface of the water, as if “fascinated by their own reflections”.

Again, it’s very difficult to verify the effect on the dolphins, or their intent in playing with the pufferfish in the first place.

But Dr Langley says dolphins share many behavioral traits with humans, including playing, carrying objects and having sex for pleasure, and she wouldn’t be surprised if they also dabbled in psychopharmacology.

“Dolphins are pretty intelligent. They have large brains for their body size.”

If it’s the case that they’re using the pufferfish to get high, they’re playing a dangerous game.

When provoked, pufferfish excrete tetrodotoxin — a potent marine neurotoxin — that is found in a number of aquatic organisms including some algae, and has been implicated in dolphin deaths.

Tetrodotoxin is the same poison responsible for about 100 human deaths each year in Japan; an unwelcome side-effect of the local pufferfish delicacy, fugu.

None of this discounts the argument that the dolphins are milking the pufferfish for a high, though.

Anecdotally, dogs have been seen habitually licking cane toads (Rhinella marina) to a point of intoxication, whilst avoiding the worst effects of the toad’s poison.

But how much can we anthropomorphise here? Do animals really self-medicate, or is it a case of seeing what we want to see?

“But they understand it helps.”

Want more science from across the ABC?

Science in your inbox

Get all the latest science stories from across the ABC.