A cat that survived catastrophic injuries after being hit by a bus earlier this year is now looking forward to living in a new home forever.

Officials at the Royal Society for the Prevention of Cruelty to Animals (RSPCA) described Trudie’s survival after being struck by the vehicle on March 14 in Luton, UK, as nothing short of a “miracle”.

The four-year-old stray suffered severe head injuries in the collision and, despite the efforts of several local witnesses, ran away before receiving medical attention.

After hearing about the incidents, the team of dedicated staff and volunteers at the RSPCA’s Southridge Animal Center in Hertfordshire launched a concerted campaign to track them down and worked with Cat Welfare Luton to get the word out.

Posters and flyers were distributed, local vets were contacted and a call for help and information was also published on social media

Incredibly, about 16 days after the accident, Trudie was discovered, captured, and taken to a local veterinarian for life-saving treatment.

Her jaw, which was completely shattered in the collision, had to be put back together while one of her eyes was also removed. When she was seen by a vet, Trudie was in a severely debilitated condition, with injuries that she could no longer eat.

“It is a miracle she survived with these horrific injuries,” said Southridge assistant manager Mona Jorgensen. “She has shown that she is a real fighter.”

“After her surgery, she was tube-fed for the first week and then when she came into our kennel we slowly weaned her back to normal food and helped her walk again.”

Trudie during her recovery from surgery.
RSPCA

Baptized Trudie in honor of Saint Gertrude, the patron saint of cats, the staff spent the next six months nursing the kitten before they began looking for a new home.

“We’ve all spent so much time with Trudie and she had a special place in our hearts,” said Jorgensen. “After everything we’d been through, we knew we had to find the greatest home for her.”

That search is over now that Dennis Hooper and his partner Shirley Carter came forward to give this incredible tortoiseshell cat a place to call her own.

Hooper found out about Trudie’s story from his daughter, who had been desperately looking for the brave cat. When she found she couldn’t, her father decided to take Trudie in with a promise to give her “a good life”. 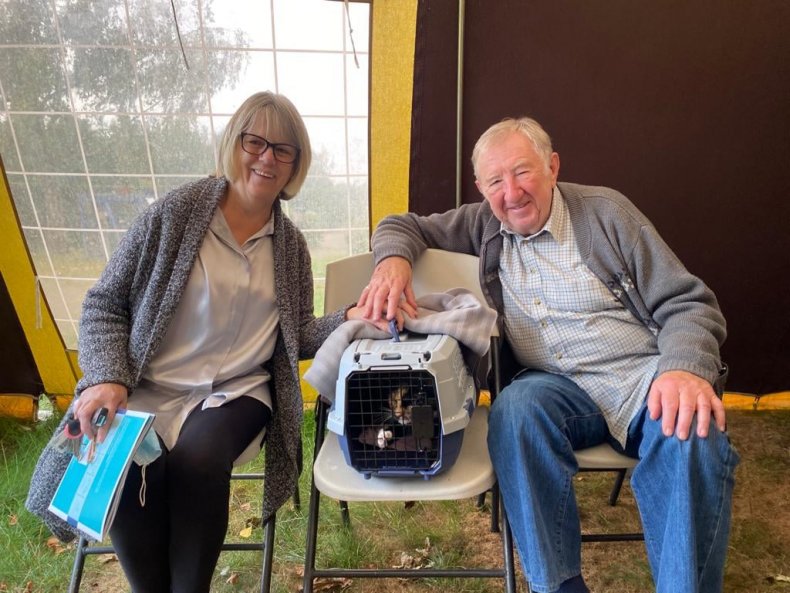 “My daughter and her fiancé were not suitable for Trudie because they have another cat, but we knew we could provide her with a nice, quiet home,” he said.

“We’re big animal lovers, especially cats, and I knew I would choose an animal that had been through the worst of times so I could show them a good life.”

The couple picked Trudie up last week and she has settled in well in their new home.

“She’s gorgeous; she loves excitement and is a real sweetheart,” said Hooper. “She is developing very well. She loves to spend time in the sunny winter garden, she has her own chair, two armchairs and a sofa to choose from, so that she can move around in different places to sleep!

“She likes to watch the birds in the bird bath and we have a nice big garden.

“When she was rescued, she was in such a condition and was really emaciated from having eaten in 16 days, but now she’s getting a bit pig-like so we need to cut down on her food!” 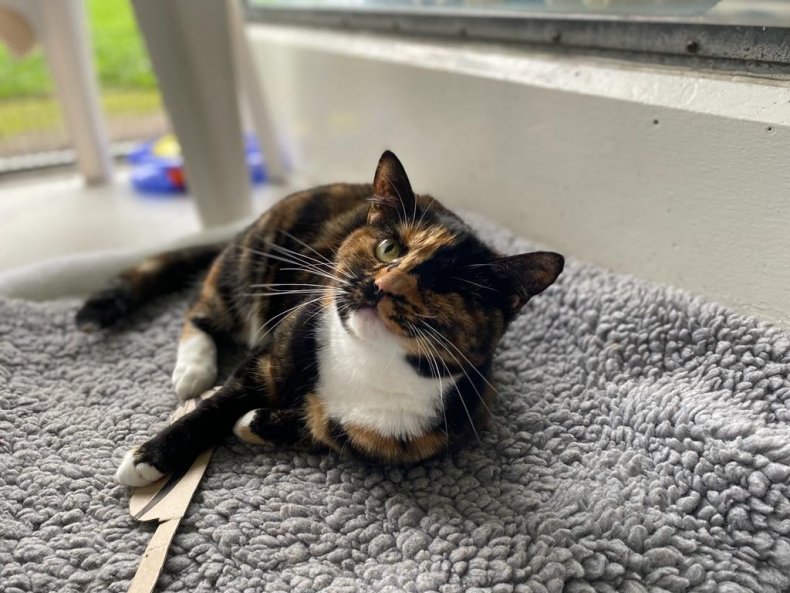 Trudie is enjoying life in her new home.
RSPCA

“We didn’t know how much she was a star; she even had people from America who made donations to help her and ask for updates.”

Hooper, a popular resident of the Southridge Animal Center, recalls emotional scenes when they picked Trudie up to bring her home.

“She’s been with Southridge a long time and the girls were almost in tears when we picked them up,” he said. “But we told them to stop by and visit them whenever they want!” 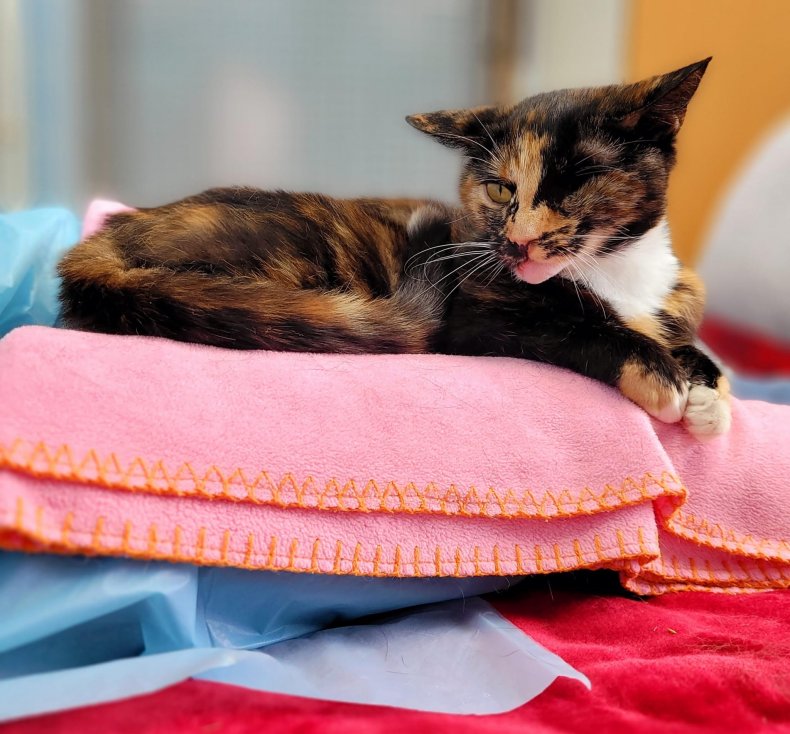 Trudie now – the four-year-old has recovered well since her ordeal.
RSPCA

Trudie’s story is a heartwarming happy ending and comes just months after a cat was reunited with its owner after living in a cemetery for over a decade and believed to be dead.

In another cute cat story, a firefighter adopted a kitten he rescued from a rain drain after developing a “special bond” with the animal. 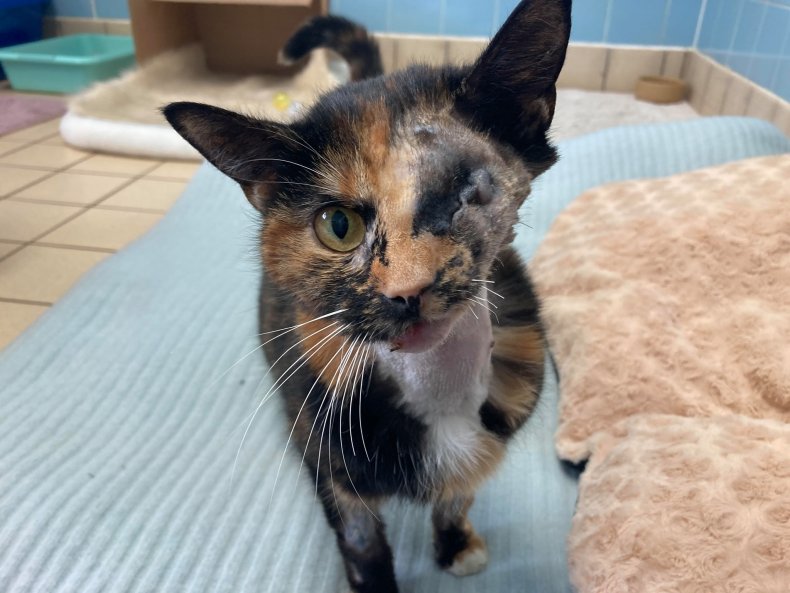 Trudie the Cat – Trudie lost an eye and her jaw was tied again after being hit by a bus.
RSPCA