While working on her capstone project, sociology student Alex Brown ’11 learned about Trap-Neuter-Return (TNR) in 2010, a humane approach to combating non-domesticated cat communities. By safely capturing, neutering, or neutering the animal and then returning it to its original place of residence, one can manage wildcat populations and reduce their numbers over a period of time without euthanasia. The catch-and-kill method has proven useless as wildcat populations will continue to multiply without ending the breeding cycle. The TNR Method can save cat lives, allay community concerns, reduce complaints about wild cats, and halt the breeding cycle, thereby improving the existence between cats in the open and people in shared settings. Brown knew it was successful on other college campuses and decided to give it a try in the southwest. However, she didn’t realize the extent of the problem until she started.

When Brown began regular feeding in one area, she found that the problem was significant and the overpopulation of the wild cats was significant. The campus administration had concerns about what the cats meant for pest control and care because the cats loved to walk under campus buildings, either through existing portals or digging new entrances and exits, potentially compromising the basic integrity of the building, entirely not to mention the detriment to the health of kittens born in these dangerous areas. A solution was needed – quickly.

With the help of faculty and staff from the Southwest, the TNR team, affiliated with Georgetown Animal Outreach (GAO), a local rescue group, and the Georgetown City Animal Shelter, was gradually captured, neutered, or neutered and taken to campus brought back the end of the 2010-2011 academic year. Everything seemed fine thanks to the efforts of Brown and the community who worked to catch, neuter, and return the cats on campus. The work Brown and others have done in the community began in 2010, and shortly afterwards an official club was formed in 2011. This also applies to the history of the origins of Cat Partners at Southwestern University (CPSU).

However, it can be said that there is a second origin story involving faculty administrative assistant Kelly Lessard, some members of the science faculty, and a particularly evasive Russian blue-gray mom, all of whom made the CPSU into that what she is today.

In the summer of 2014 Lessard had an office in what is now the Fondren-Jones Science Center. During the summer recess, the campus was sparsely populated, and when she, Professor of Chemistry Emily Niemeyer and Professor of Physics Steve Alexander, noticed the hungry-looking gray cat was hanging around her The elusive gray mom

Building they were concerned about. At the time, the CPSU was an existing organization but did not feed cats in this area of ​​campus. So Lessard turned to the professor of religion Laura Hobgood, who was involved in GAO, and Ben Nava, employee of the Physical Plant and well-known animal whisperer. They in turn referred her to the professor of political science Shannon Mariotti, who was then advisor to the CPSU. Lessard started feeding Gray Mama, making plans to take care of her health and catch her for TNR, and from that moment she was fully invested in caring for the cats on campus. She became a consultant after the summer of 2014 when Mariotti asked her to take over the management. This turned out to be just in time, as two litter of kittens were born the following fall semester, an indication of the many, many, many kittens to come in the future, most of which can be attributed to Gray Mama. The period between the end of Brown’s TNR efforts in 2011 and the restart of TNR efforts in 2014 gave the campus cat population time to repopulate and get out of hand.

Campus cats matriarch Gray Mama is notorious for her evasive maneuvers as she only successfully TNRed in March 2017, but not for lack of attempts. in the 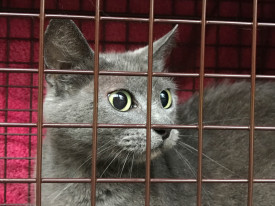 Gray mom after captureIn fact, she was successfully captured by the CPSU in May 2015, but then made a daring escape and stayed at large long enough to give birth to over half a dozen litters of kittens (we know of).

And so the CPSU’s TNR efforts were reborn and revitalized. A new club constitution has been created that states that its goal is “to protect all cats living in the wild on campus, both stray and feral, according to the tried-and-tested Trap-Neuter Return (TNR) formula and the one we know To provide for the CPSU ”and love came to fruition today.

A key attribute of the club is how many people have been involved, contributed over the years, and what the club is like. Currently, in addition to staff and faculty, the club has approximately 25 active student feeders, as well as an extensive email list of others who have invested in cat welfare. Still, CPSU President Hannah Roark ’21 declares that they still need new volunteers. Her introduction to the CPSU was characteristic of her creation: she got involved thanks to a friend who asked her to be on the leadership team. She says, “I think we’re a great example of how Southwestern creates such a strong sense of community. We really all bonded through our love for these cats. “And when Roark is asked about her favorite cat, she shows her affinity for Mister Squinty – a white-bellied gray tabby – and his angry eyes.

Unfortunately, Mr. Squinty has a congenital disorder caused by his eyelash hairs 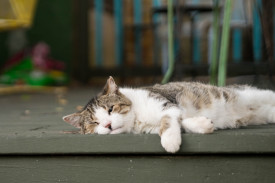 Mr Squinty is waiting for CPSU President Hannah Roark ’21 to bring him foodFollicles grow towards his eye, hence the seemingly smelly eye he always serves. But while this mean Muggin moult looks like it has the disposition of the unscrupulous pirate Blackbeard, it’s actually a contented old cat who happily lived behind it Korouva milk bar on the Southwestern campus, patiently waiting for Roark to bring him food. After the ice storm in February, Mister Squinty moved to Mood-Bridwell with the other four cats. As a result, the feeding station behind the Korouva Milk Bar was closed.

There is no doubt that Mister Squinty is the favorite of many; It does, however, have some competition from an up and coming orange tabby, Pumpkin, who recently took up residence under the steps of the Mabee Residence Hall. Although he was only recently taken into the family since the beginning of the 2020 fall semester, he is already venerated by many dormitory students and is the subject of a proposal coordinated by the CPSU to allow the Southwest Administrators to create one present new feeding station just for him outside of the Mabee Residence Hall.

The CPSU currently has three feeding stations around the campus, where a total of eight cats are cared for. However, this proposal requires the installation of a new station for this purpose only Super Cal
Pumpkin. Although he is well looked after and frequently fed by the disciples of Mabee, the CPSU wishes to officially take this responsibility to ensure that this is done regularly and properly. Through a designated feeding station and the assignment of voluntary feeders, the CPSU was able to ensure that he was fed regularly and only in the morning. This last part is extremely important: if well-meaning students leave out food for him at night, it can attract other nocturnal animals that would love to get their paws on some of his delicious cat food. This is a concern of the campus administrators for obvious reasons, and the CPSU hopes they can resolve these issues by setting up this feeding station and educating students on the correct way to feed him. Catching him and giving him to the Georgetown Animal Shelter is a poor option, not only because his status as a deafened community cat means there’s a significant chance he’ll get knocked down, but also because he’s a page from the book appears to have taken from Gray Mama and defied all efforts to catch him.

In a time of great uncertainty and adversity, such as now, we are particularly reminded of the true nature of the human experience and that it can at times be one of grief and suffering. Being away from home can be stressful for students as many students miss their pets on campus. The CPSU serves these students and others as an opportunity to be part of a community that has one clear purpose: to care for the cats. And when we take care of the cats, we take care of ourselves and each other. This feeling is beautifully described by Lessard: 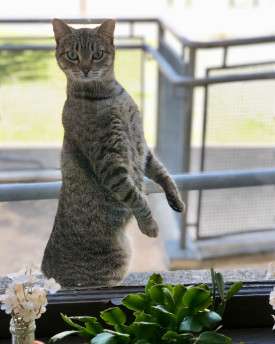 Itty bittysomething different from ourselves … You appear at familiar times in familiar rooms. They acknowledge our presence even when they don’t allow us to touch them. They remind us that we do not live alone in this room. They live under our buildings and on our doorstep, basking on our window ledges and sidewalks. They ask us to look after them by providing them with food, shelter, and a safe environment that allows them to function as a colony – a kind of family. Their requirements are low, but enough to make us responsible for something other than ourselves, our school, our social life.

To make a financial donation to Cat Partners, go to Southwestern University Giving Page. You must specify the money for Cat Partners (CPSU) specifically by selecting “other” as the name and entering “Cat Partners” as an additional name.

The CPSU also accepts gifts in kind such as dry or wet cat food. Many friends have donated cat food that their pet didn’t like or need. The campus cats eat all kinds of food.

The CPSU requests that if you see kittens or an unidentified cat on campus, report it to a CPSU official or advisor. listed hereTake a photo and provide the exact location. The CPSU has the necessary resources to catch the animals safely and then to care for them. Your report helps keep the cat population in check on campus.

Learn more about CPSU by visiting their Instagram @SU_cat_partners or by contacting an official on the CPSU homepage website. To get involved, email the CPSU adviser and / or president.