dr Karissa Mitchell knew something was wrong when work took over everything.

She didn’t have the energy to cook meals, or call her family on the phone. It was the height of the pandemic, and the Nanaimo, BC-based veterinarian was not only putting in 12-hour days but absorbing the emotion that comes with treating sick animals and dealing with their often challenging owners.

She couldn’t take it.

“I wasn’t able to be the veterinarian that I wanted to be, and I did burn out,” said Mitchell, 28. “It was just really frustrating to realize that I couldn’t do it anymore.”

Mitchell quit her full-time job as a vet in April 2021 and now fills in at different clinics, where she can control her workload.

“I love my job, but I am nervous for the future of my profession if no changes are made, especially with the vet [technician] and the vet shortages.”

COVID-19 exposed cracks in many parts of the medical system, including animal care, which was on the brink of crisis before the pandemic.

There aren’t enough veterinarians and staff to care for pets and livestock across the country, even as the number of pets — and the intensity of people’s attachment to them — grows.

The Canadian Veterinary Medical Association estimates that 30 per cent of Canadian veterinarians and 50 per cent of vet technicians are in the advanced stages of burnout.

Skyline opened in September and is one of the only clinics in the area taking new patients. As a result, Lis’s days are packed. 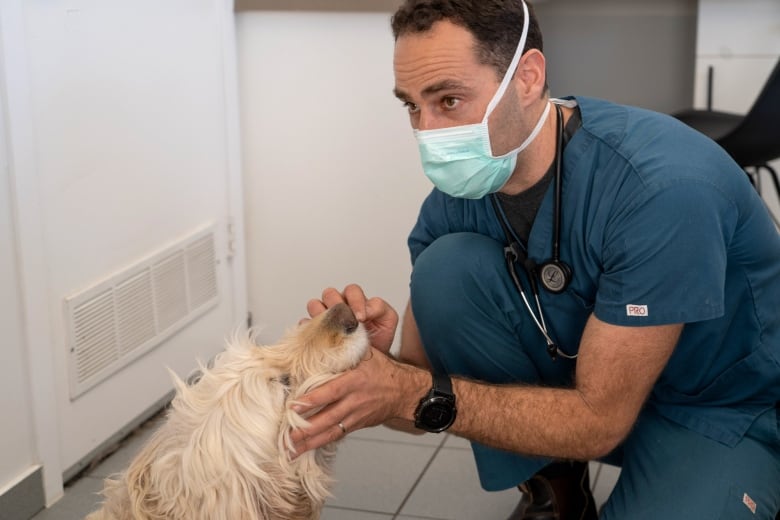 On a recent Wednesday, Lis removed a potentially cancerous mass from a cat, assessed two other felines, had lengthy appointments with several dogs and even X-rayed a lethargic backyard chicken with a sore foot.

It’s not just about workload. Veterinary medicine is unique in that highly motivated, compassionate professionals go through intense and competitive training to care for animals, but end up spending a lot of their time dealing with owners who may not be able to — or want to — pay for services.

“A lot of the veterinarians that come out of vet school … become quite disillusioned quite quickly,” said Lis. That’s because they might not realize that “there would be a component of having these discussions [with clients] every day, saying, ‘This is how much veterinary medicine costs.'” 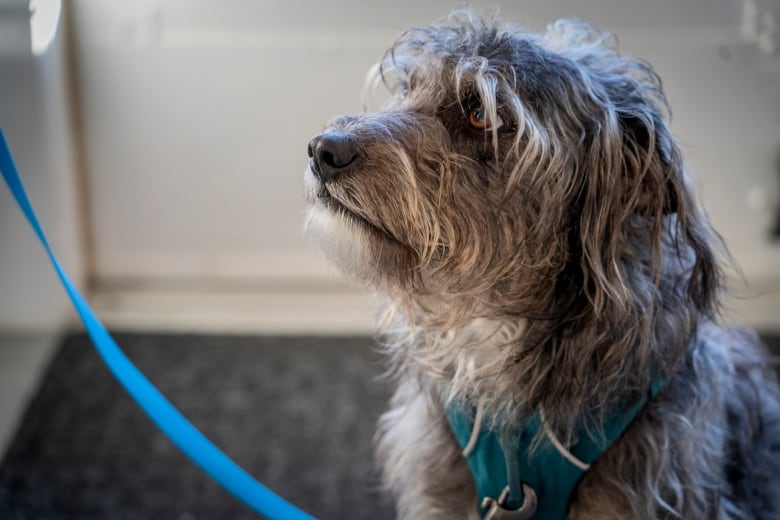 Another patient at the Skyline veterinary clinic in North Vancouver. (Lyndsay Duncombe/CBC)

This is especially true in Canada, he says, where universal health care means people don’t understand the costs associated with medicine, even though animal care is considerably cheaper.

Mitchell agrees this was part of the reason she burned out.

“The money from [a customer’s] bill is not just going directly into veterinarians’ pockets, it’s to pay for the medicine and the supplies and the resources that we use.”

The reality is that despite the high volume of patients, being a veterinarian is highly unlikely to make someone rich.

Salaries vary depending on the location and the kind of practice, but most “companion animal” veterinarians can expect to make somewhere between $90,000 and $100,000 a year.

That’s closer to a teacher than a medical doctor, and many veterinarians work in or own small businesses with minimal, if any, benefits. 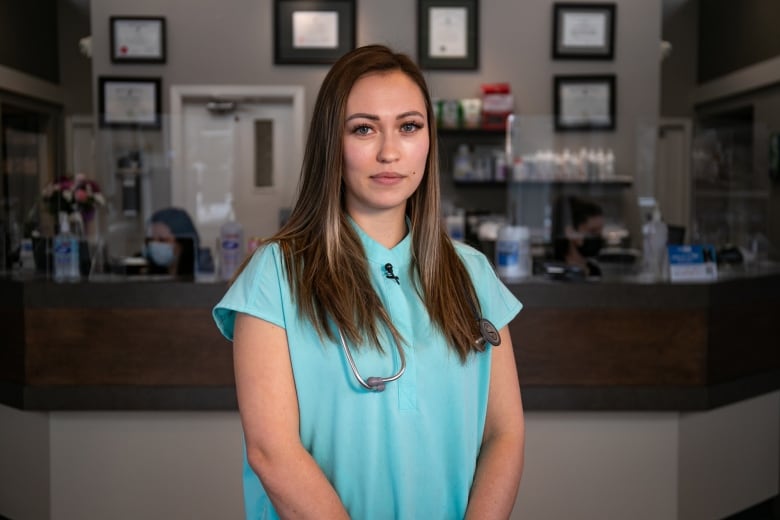 Nanaimo veterinarian Dr. Karissa Mitchell was not only putting in 12-hour days but absorbing the emotion that comes with treating sick animals and dealing with their often challenging owners. (Michael McArthur/CBC)

Not only that, but some new veterinarians are entering the profession with staggering amounts of debt.

That’s partly because the way Canada trains veterinarians is different from any other profession. There are five colleges across the country, and students can only attend the program in the region where they live.

Provincial governments fund seats at the relevant institution, but the number of graduates doesn’t always line up with the size of the population.

Excluding international students who may or may not stay in Canada, around 380 veterinarians graduate in Canada every year. That rate barely keeps up with anticipated retirements, not to mention growing demand.

The high cost of education

The Alberta government recently announced a plan to double the number of graduating vets, in order to address the shortage.

In Saskatchewan, the Western College of Veterinary Medicine (WCVM) came up with a different plan. Up to 30 students will be admitted each year without provincial funding — essentially allowing Canadian students to pay the same fees as international students.

That means qualifying students will have to pay for the full, unsubsidized tuition — a huge difference in cost. A student with provincial funding can expect to pay $12,717 in annual tuition, while those without funding will pay $67,717 each year for the same education.

“When I got into vet school, it was a dream come true, and it was also devastating,” said Ruth Patten, who is from Kelowna, BC, and in her second year at WCVM.

She did not qualify for one of BC’s 20 funded seats, so she estimates that with living expenses, her education will cost somewhere between $300,000 and $350,000 for four years.

“It is going to be difficult to pay off that amount of money in this profession,” she said.

In fact, given borrowing limits at banks and with government student loans, Patten isn’t sure if she’ll even be able to cobble together enough cash to fund her education. 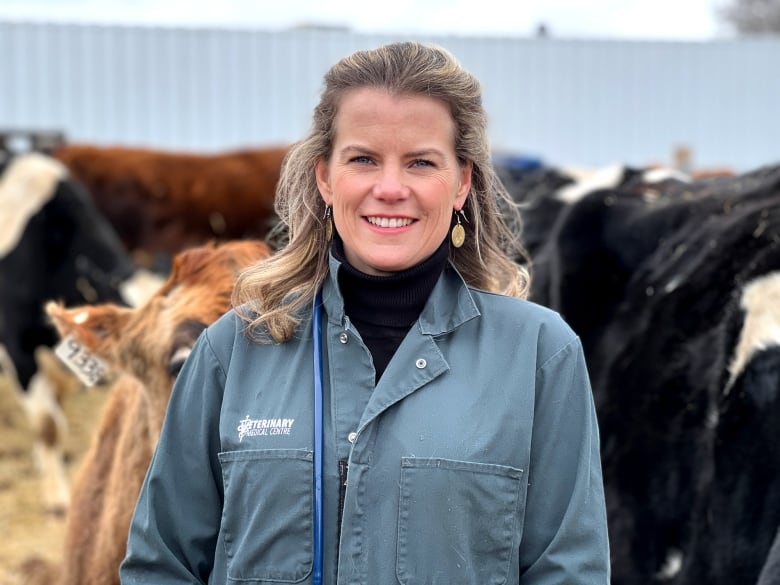 ‘When I got into vet school, it was a dream come true, and it was also devastating,’ said Ruth Patten, who is in her second year at the Western College of Veterinary Medicine in Saskatchewan. (Don Somers/CBC)

She is part of an effort to lobby the BC government to pay to train more vets. A petition urging additional funding has collected more than 2,000 signatures.

Patten is aware that her debt load will likely mean a stressful start to a career in an already stressful industry. That said, she can’t imagine doing anything else.

“It’s a crisis, but we gotta get involved, something’s gotta change, and I don’t think pulling out and going into a different profession is going to help,” she said.

One thing that is changing is how veterinarians are being trained. Because of the mental health crisis in the field, the WCVM has added an emphasis on well-being to the curriculum. Students now learn about personal and business finance, communication and teamwork.

Starting next year, there will also be a specific resiliency program, according to Dr. Chris Clark, associate dean of the program.

“That’s a really comprehensive program that focuses on learning skills that you will eventually develop through your profession that will help you deal with challenging circumstances and challenging people, both of which happen in veterinary medicine all the time,” Clark said. 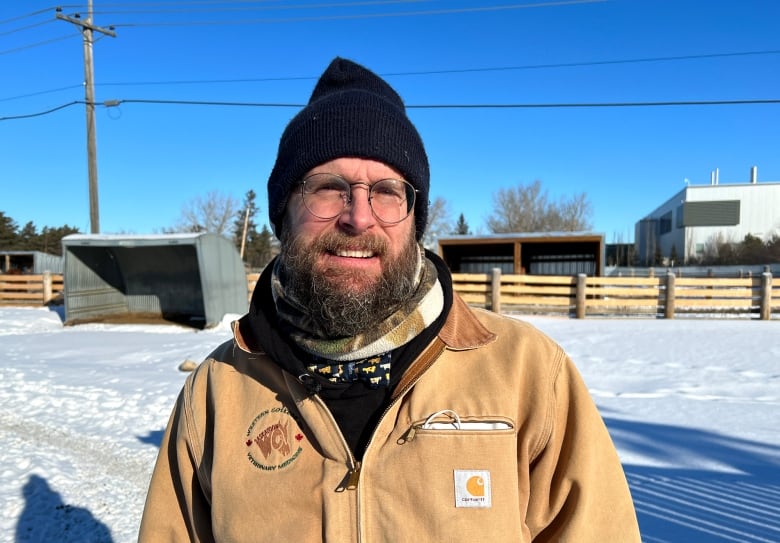 Western College of Veterinary Medicine in Saskatchewan is introducing a specific resiliency program for its students, according to Dr. Chris Clark, associate dean of the program. (Don Somers/CBC)

He says the crisis has meant an abundance of job opportunities for his students. Everyone in this year’s graduating class is expected to have a job lined up after graduation; many already do.

“Right now, they will have more options than any generation that’s ever graduated,” he said.

But Clark worries many of his students will be entering clinics without the mentorship and support new vets need.

dr Karissa Mitchell chose to stay in veterinary medicine, but as a so-called locum veterinarian, she controls how much she works and when. She makes sure to take lunch breaks, and has weekends off.

“I just feel more energized, I’m excited to come to work,” she said. “I love my job, I love working as a team, I love animals.”

But everywhere she goes, she sees evidence of a system at the breaking point. Mitchell says not one clinic she works at has enough staff.