Buddy the cat with his new family. (PSCPA)

PHILADELPHIA – The cat that was the victim of an intentional dog attack in Philadelphia two months ago has finally found a place to call home.

In March, two juveniles were caught on camera letting their dogs viciously attack the cat that was sitting on the front porch of a home in Frankford.

Two juveniles, 12 and 17, are facing charges after authorities allege they intentionally allowed their dogs to attack a cat that was sitting on the porch of a home in Frankford. The cat, Buddy, suffered life-threatening injuries.

The Pennsylvania SPCA shared a video of the incident showing two people walking their dogs when they spotted the cat, named Buddy, on the front porch of the home. The dogs then lunged toward the cat and the individual holding the leash allows the dogs to walk onto the porch closer to the cat before they dropped the leashes.

Buddy suffered life-threatening injuries that required monitoring at the SPCA’s Philadelphia headquarters, according to the organization. 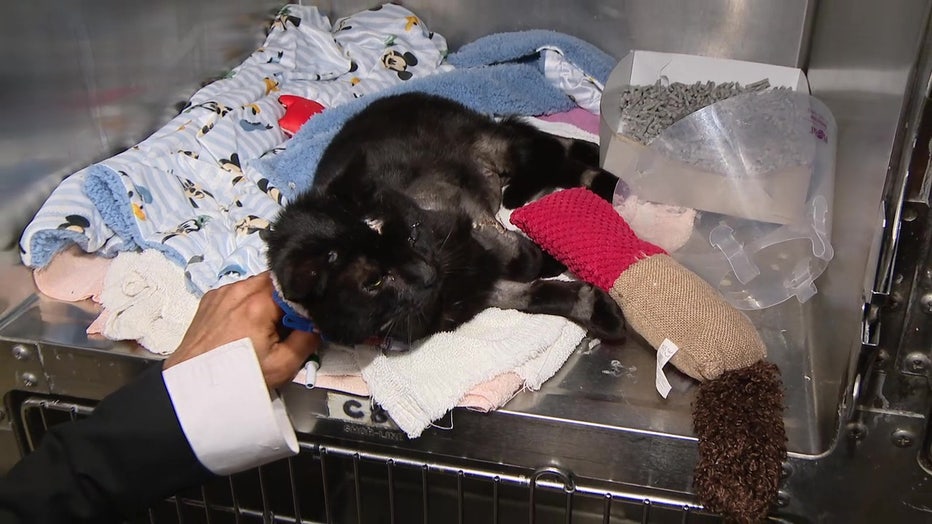 After Buddy was out of critical condition and in the clear, the cat was sent to a foster home with a veterinarian for continued care.

According to the PSPCA, Buddy was adopted by veterinarian Dr. Katie Venanzi and her husband.

“When Buddy left for foster care to continue his road to recovery, we were all hopeful that he’d already found what would become his ‘furever’ home,” the organization said. “And, to top it off, Buddy and his feline foster sibling, Teddy, were almost friends.”

The PSPCA says Buddy now spends his days in the sun on a windowsill or watching the world from the front screen door.

Authorities say the two juveniles who intentionally let the dogs attack Buddy were 12 and 17. They are now facing criminal charges for animal fighting, felony aggravated animal cruelty and conspiracy, according to officials.

“Buddy is a symbol of everything we do here at the Pennsylvania SPCA. Our Humane Law Enforcement team rescues animals every day from cruelty & neglect,” the organization said. “Our medical team works miracles to breathe life back into the most critical patients. And, our foster and adoption teams find our animals the very best homes.”