For years, a friend urged Katy McQuaid to write a book. 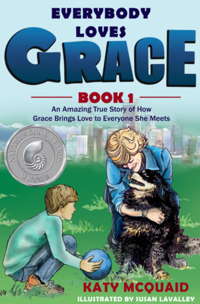 The bright idea was for McQuaid to chronicle her three decades working in the CIA, which would seem to offer plenty of material for a memoir.

Not in the mind of the would-be author.

She changed her mind — about writing a book, at least — after a morning walk with her dog in 2017. On their route near Denver Health, they passed by the head of the paramedics team. The sight of Grace, a fluffy and black-haired Finnish Lapphund, stopped the man in his tracks.

“If only I could start my day like this every day,” he announced.

On the way home, something clicked. McQuaid thought of many similar interactions with her peppy pup through the years. It started shortly after she rescued the dog in 2011. Wherever Grace went, everybody smiled.

“That story I’m supposed to write isn’t about me,” McQuaid decided. “It’s about Grace.”

Grace is the inspiration behind Katy McQuaid’s series of children’s books.

Another realization followed. It only made sense for a story about Grace to be a children’s book.

“I don’t even have kids,” McQuaid said. “But I’m going to write a children’s book?”

The book arrived in 2018 with the title “Everybody Loves Grace: An Amazing True Story of How Grace Brings Love to Everyone She Meets.”

Writing from the perspective of her dog, McQuaid starts from the beginning.

McQuaid was looking for a companion for her 15-year-old dog, also a Finnish Lapphund, named Tinto. She fell in love with the easy-going breed, one traditionally known for herding reindeer and resembling a small teddy bearlike wolf.

For McQuaid, the breed’s most important trait has nothing to do with their looks. But the way they look at you. 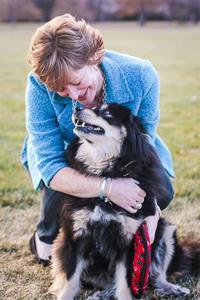 “They know how to look into someone’s eyes and let them know they are loved,” she said.

Finding a Lappie, as they’re called for short, to rescue wasn’t easy. McQuaid sent messages to breeders across the country and beyond. Finally, she got a response from a woman in Canada with a farm full of dogs. Her husband told her it was time to get rid of one.

In those messages, there were hints that the dog was being neglected.

“She told me, ‘I need to find a safe place for Grace,'” McQuaid said.

So the 4-year-old pup was put on an airplane by herself. When she arrived at Denver International Airport, Grace’s new mom was waiting.

McQuaid says this story holds a lesson for readers.

“Even though change happens in life, good things can happen,” she said. “I wanted to encourage kids to be OK with changes.”

Another lesson comes from their daily walks, when McQuaid and Grace inevitably meet someone or several someones who say, “Grace made my day.”

On most days, Grace could pass for a local celebrity.

“Everywhere we go in Denver, people know who she is,” McQuaid said.

Katy McQuaid with her dog, Grace.

Neighbors know her. So do workers at Walgreens and nurses at Denver Health. They always meet new people, like students training to be paramedics in need of comfort ahead of a final exam and kids in classes when McQuaid stops by for a reading. They once met a man sitting alone on a bench. While he told McQuaid about the scary diagnosis, Grace sat next to the man until his bus came.

This is an example of what McQuaid calls the magic of Grace.

“She tells me where to go,” McQuaid said. “She knows who needs her the most.”

It turns into some good stories, enough for the books to be turned into a series. The sixth one came out in November. Several have won book awards.

“The books are a labor of love,” she said. “They’re my way of trying to leave the world a better place.”

The “Everybody Loves Grace” books have received lots of love. McQuaid’s favorite feedback?

That the books, complete with illustrations of Grace’s friendly face, are helping kids learn to read. 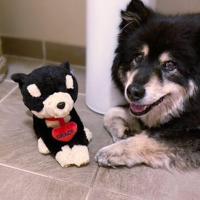 Grace with the stuffed animal version of her.

“It can be embarrassing to mess up,” McQuaid said. “But if you’re practicing with a dog, you don’t mind making mistakes.”

Another book in the series is on its way. Before that, though, McQuaid is working on something else: her own memoir.

In the evenings, McQuaid will sit in a chair and write while Grace lays nearby. In the past, when McQuaid thinks a book is finished, she’ll get a sign from her pup. Grace will come over to sit next to her.

“Grace knows what people need,” McQuaid said. “That’s what is special about her.”